Why the US should not sanction Russia for annexing Crimea

The US annexed California, Texas, New Mexico, Nevada from Mexico and Florida from Spain, because the US is more powerful because it has a more just government that is for the people, of the people, by the people. Mexico and Spain are weak because they have corrupt governments that are far less capable than the US government. Mexico only has 3 1950s era F-5 fighter jets, 0 tanks.
edit on 13-1-2017 by JeremySun because: (no reason given)


Let other countries get involved and figure it out, if it's such a big deal.

America, may want to be, but isn't world police.

Plus, what moral high ground and track record does the U.S have, when it comes to getting involved in other countries issues?

If the rest of the world isn't doing anything, then the U.S should follow their lead.

posted on Jan, 13 2017 @ 01:00 PM
link
Because the Crimea has been part of Russia proper since 1783, until Khrushchev transferred it to the Ukrainian soviet in 1954. With that in mind one could argue that the Russians liberated the Crimea.

its cool when the U.S. does it. other countries, not so much.
its cool when we intervene with foreign elections/governments/regimes, when Russia [allegedly] does it to the U.S. not so cool.

-
in modern day, no country should be 'Annexing' or 'invading' or 'freeing' and other sovereign countries.

Putin is arguably the richest man on the planet. All that money didn't come from KGB and Russian President paychecks. And you want to claim that Ukraine is more corrupt than Russia? Ha!

The people of Crimea are much better off as citizens of Russia than they were as citizens of Ukraine. They are more prosperous and their government is far less corrupt.

posted on Jan, 13 2017 @ 01:19 PM
link
a reply to: JeremySun
I love this thread. Your argument is very philosophical and goes straight back to Ancient Greece. Is might always right? Does a government's might increase and decrease in proportion to it's morality? Your arguments seem to be as follows.

Furthermore, what is a "right?" Define it.

posted on Jan, 13 2017 @ 01:21 PM
link
Ukraine was the breadbasket of the USSR. It could have became the most prosperous ex Soviet republic. Why didn't it? Why did it become backwater? Because its government was corrupt and not accountable to the people of Ukraine.

Russia became the most prosperous ex Soviet republic because it has an outstanding government with very little corruption that is accountable to the people of Russia.

originally posted by: JeremySun
Ukraine was the breadbasket of the USSR. It could have became the most prosperous ex Soviet republic. Why didn't it? Why did it become backwater? Because its government was corrupt and not accountable to the people of Ukraine.

Russia became the most prosperous ex Soviet republic because it has an outstanding government with very little corruption that is accountable to the people of Russia.


North Korea is more powerful, militarily speaking, than Denmark. Is the North Korean government more ethical than the Danish government?

I'd argue that Estonia is doing way better than Russia. Especially now that Russia's economy is in the toilet. Does that mean that Estonia has the right to annex Russia?

originally posted by: Xcalibur254
a reply to: JeremySun

Putin is arguably the richest man on the planet. All that money didn't come from KGB and Russian President paychecks. And you want to claim that Ukraine is more corrupt than Russia? Ha!


This comment shows how little you actually know about what happened in Ukraine.
Might I suggest some reading to catch up with the rest of the class.
Crimean Referendum(2014)
They voted to leave Ukraine because the current government under Viktor Yanukovych was very corrupt.
You wanna bitch about something?
Then bitch about how Putin sheltered Viktor when his people were ready to string him up from the closest tree after he ordered his troops to start sniping innocent unarmed protesters.
That's my problem with this.
But Crimea voting to leave the Ukraine I see no issue with.
Just like I wouldn't care if California voted to leave the republic.
In fact I'd do anything to help facilitate that...

There are powerful countries with very corrupt governments.

Maybe a different word than powerful should be used.

Aside from that, sovereign nations have the right to exist on their own, especially if they themselves are not too corrupt. There's likely some government corruption in all countries, except maybe Iceland.

posted on Jan, 13 2017 @ 02:05 PM
link
Your OP is right in a way - we need to do ALOT more than just sanction them. We need to make sure they pay for all the crap they have pulled so that they never try this stuff again - to us or any of our NATO allies including Ukraine.


There was a peace deal with Ukraine when the USSR fell - that if they gave up their Nuclear Weapons the western countries would protect them. We need to honor our deal with them. Now.

posted on Jan, 13 2017 @ 02:06 PM
link
All of the countries that stayed in the sphere of Russia's influence didn't move forward as fast as the ones that were able to break out. Compare the Baltic countries to Ukraine.

That's what Russia does, it weakens others and makes them look bad so they don't look bad themselves when compared. You know your country is in a sh*thole, when people in tiny Baltic states, who broke out of the Soviet union and never looked at Russia again, live better or the same as people in Russia. World power my a$$.

It will take decades for Ukraine to clean up the filth the ties with Russia have left behind.
edit on 2017-1-13 by gmacev because: (no reason given)

You are a pretty good student of history.

Don't get me wrong. Yanukovych was an a**hole and I'll criticize him all day long. At the same time Yanukovych and his cronies stole about a billion dollars. In contrast the conservative estimates on Putin's net worth are $50 billion. They go much higher than that. And that doesn't include his inner circle who are similarly suspiciously wealthy. If anyone tries to claim the Ukrainian government is corrupt while claiming the Russian government is not they deserve to be laughed at.

In terms of the actual referendum, it's very shady. Russia's own Human Rights Council reported that only 15% of the population voted in favor of the annexation. And following the annexation Putin pretty much made it impossible for people who opposed it to remain as residents of Crimea.

It's the people of Crimea who decide about Crimea's future, the Americans in America, the Russians in Russia ... Is that so difficult to acknowledge ?

The U.S and European Union may want to save Crimeans from themselves. But the Crimeans are happy right where they are.

One year after the annexation of the Ukrainian peninsula in the Black Sea, poll after poll shows that the locals there -- be they Ukrainians, ethnic Russians or Tatars are mostly all in agreement: life with Russia is better than life with Ukraine. 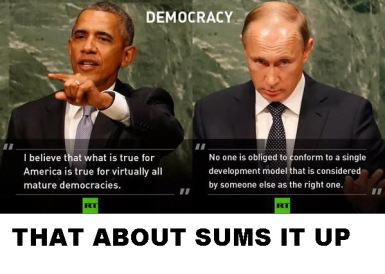 And yet what that article doesn't acknowledge is what happened following the referendum. First, a large portion of Tatars (the actual native population) left. Then there's the fact that anyone who didn't want to become a Russian citizen had four weeks to declare their refusal. At which point they had to be granted a permit of residence if they wished to remain a citizen of Crimea. Among the more ridiculous requirements for this permit was a mental health evaluation.

So I think it's safe to say that many who opposed the referendum didn't stick around. Thus, those poll results.

Did you ever heard of unrest in Crimea caused by the people's will to oppose Russian authorities ?
There are none.
Now you can start to wonder why these people are more willing to stick with Moscow rather than run after the chimaera of Kiev.

The US has no legitimacy other than its own self-esteem and interests in order to support a puppet presidential oligarch under the disguise of the promotion of so-called 'democratic' values.
The Crimean know what they'll get with Russia. They know their own needs, and they know them better than anyone else.

edit on 13-1-2017 by theultimatebelgianjoke because: filled out