12yr old Commits Suicide and Streams it Live on Facebook 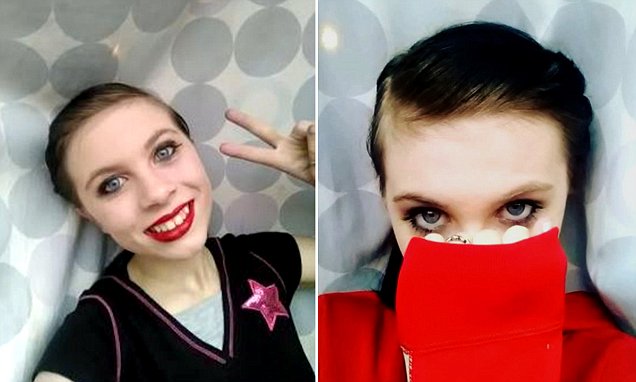 Such a beautiful girl destroyed by abuse

The video on facebook started automatically luckily I managed to shut it down before it reached the end. This is a heartbreaking story of a young girl sexually abused by a relative and unable to continue living. However, this action, like the action of the Chicago 4, says such a lot about the youth of today not only because of the suicide but because of this incessant need for attention through social media and now, even during and after death. Its a very sad indictment to the 21st Century way of living.

The video is still available despite thousands of requests to remove it from various sites, but Police in Georgia have said they have no legal powers to force removal. For obvious reasons I am NOT going to post it. Despite her obvious distress and problems, what possesses anyone to stream their own death except ego? Attention seeking? Seems pointless when you're not around to receive the accolades.

What concerns me also are the sickos and perverts that will no doubt get off on this tragic video. Its already on a particularly obnoxious site feeding the demented psyche of the sick and twisted. The family must be devastated knowing their child's last moments have gone worldwide for all to ogle at.

Not gonna watch the video but if it's 40 something minutes long and was streamed live why didn't anybody intervene?

That is just horrifically sad.

Bystander effect, and no doubt some sickos wanted to watch it.

Suicide is a permanent solution to a temporary problem.

I saved a family member from an attempt when I was much younger, and it still affects me today.

From the short bit I saw it looked like she was out in the open perhaps a long way from people. She hung herself from a tree I'm sure had anyone been around they would have intervened. What a tragedy

posted on Jan, 12 2017 @ 05:42 PM
link
The tragic case is that she screamed for help, yet no one listened, yet thousands of viewers indulged in her suicide.

A twelve year old streams her suicide and most likely the words she heard were those who wanted to indulge in her death as a sick perversion.

posted on Jan, 12 2017 @ 05:48 PM
link
i dont get it. you say the video is sickening and needs to be take down but its on so and so website and you can still find it. and the article itself is doing the exact same thing. i dont really care to see the video but if i was a few years younger id have to see it. the way you worded your post and the way they wrote that article almost beckon me to do so.

tldr if you dont want people to watch the video dont talk about the god damn video and exactly where to find it.

I was not encouraging anyone in anyway to pursue or search for the video. One of the points in the OP was the fact that these videos cannot forcibly or legally be removed and that such videos feed the strange and the perverted. (I have edited the site name out)

What the hell is wrong with FaceBook?? Why would they allow this sort of thing to be streamed live? It's absolutely sickening and completely immoral.

Secondly, it is extremely sad that this girl felt so trapped that death seemed like the only escape from her horror. As can be seen in the pics of the OP (I refuse to click on the link - I don't want to see any more) the girl is very 'mature' for her age. She has had her innocence stolen and her soul shattered.

I hope they catch the sexual predator that did this to her and make him pay. Personally, and this is just my own opinion here, I think the abuser should be charged with involuntary murder. He did this to that girl, he caused her to kill herself through sexual abuse.

You've watched it and she screamed for help? Oh jeez that's even worse. I hope to goodness someone a friend or someone called emergency services (although clearly they didn't make it in time) and didn't just sit there watching it.

I don't know many 12 year olds who understand death, let alone their own.

We need better mental health, and services for children and teens. This is tragic, and unacceptable.

There also needs to be more active monitoring of such social media sites, to prevent and stop such things as they occur. Be it a crime, or something like this.

I'm not a huge fan of medications for mental health, but I feel most people would benefit from having a counselor, or someone to talk to in confidence.

I have to agree. One of the first things I learned shortly after completing my EMT years ago was that if the person wants to commit suicide we're not going to stop them. Within a year of becoming an EMT I was dispatched to two suicides, both jumpers, who were both elderly patients that were terminally ill. Obviously there wasn't much we could do for them because this is New York City we're talking about and the buildings these folks lived in were high, but the fact is that there was no chance to prevent this. They made their decision and they jumped. No phone call, no conversation.

The people who we've talked down off of ledges were on the ledges for a while. They were seen by people, those people had time to call, we had time to get there, so did the police. Generally speaking, those folks don't really want to jump, they need help and this is a way to be seen and heard and get help. The last way perhaps, but when one is desperate... it may seem like the only choice.

To hear of a 40 minute video makes me think this person fit into the latter group and perhaps in the end only went through with it because no one intervened. I will not watch the video and I pray that for the family's sake the video is removed. The idea of watching someone's tortured last moments does not interest me. It is a video of pain and anguish that no one should have to see, especially not the person's family. Admittedly I don't know all of the specifics but based on the platform and circumstances I do have to believe that had there been some intervention this wouldn't have happened.

posted on Jan, 12 2017 @ 06:00 PM
link
She may have believed that by ending her life this way. It would affect the person that abused her the most. Unfortunately it will affect everyone that cared about her the most this way also.

originally posted by: Lysergic
Remember this warning, what has been seen cannot be unseen.

Many of us learned that with the Daniel Pearl video.

I would highly recommend that people not search for this video.

There are other things to watch.

Its sad that it appears she couldn't talk to her mother sister teacher someone about what she was apparently going through. There are suggestions that she possibly had mental health issues too although I've found no proof of that but I have now learnt that she was in her own front yard....and for 42mins was undetected even though a womans voice can be heard calling her name (apparently according to one source I only watched first couple of mins of the video)

No i havent watched it, cause i know i will just become frustrated. She wouldnt stream it, if she didnt want help. A part of her didnt want to die, she wanted help, and someone to rescue her.......

I wont watch it, cause i will just go in a dark frenzy..