The Department of Justice Inspector General will review broad allegations of misconduct involving the FBI’s investigation of Hillary Clinton’s email practices and the bureau’s controversial decision shortly before the election to announce the probe had resumed, the Inspector General announced Thursday.

The probe will be wide ranging — encompassing the FBI’s various public statements on the matter, whether its deputy director should have been recused and whether Department of Justice or FBI employees leaked non-public information, according to a news release from Inspector General Michael E. Horowitz.

I wonder if the investigation will look into how/why, after acknowledging that Mrs. Clinton mishandled information all over the place, she walked away scott-free. I also wonder if they will ask any questions about the Bill-Loretta not-so-secret meeting.

I think this is also on account of the Guardian reporting that FBI sought fisa court warrant to surveil trump campaign officials.

That raises a lot of questions about what James was up to during those investigations.

They have 9 days to finish the investigation, LOL.

HHS sent me new ObamaCare insurance directives this week... for 2018!

These entrenched public servants don't realize that their gig is coming to an ABRUPT end. No smoooooooth phase out transition this time. Sorry! (not)

I hope at least some normal sounding answers are given about the whole topic. So far, the ones given sound a lot like "She is above the law, get over it".

Here is what I put over there.

A lot to take in here, but here is my favorite part.


Allegations the FBI Deputy Director should have been recused from participating in certain investigative matters;

So the justice department, whose head, Loretta Lynch, has a secret meeting with the woman she is investigating, Hillary Clinton's husband on a tarmac, and yet still will not officially recuse herself, is now criticizing James Comey for not recusing himself!

Another hilarious point is that many of the democratic politicians that pushed for this, and many dem fans that will cheer for it are the very people that claimed Trump needs to just leave the prosecution of HIllary alone and move on.

Now they want to relook into this.

I say go for it. As far as I am concerned, this is an admission by democrats that the legal process must be followed, and we shouldn't just move on. I can't wait for their support for a new justice department to take another look at the investigation.

Don't care if they have a D or an R before their name. If they broke a law according to their oath to serve, than lock em up! It isn't like they have a problem creating laws to lock the rest of up is it?

posted on Jan, 12 2017 @ 01:46 PM
link
Did the Russians influence the FBI in their investigations of Clinton to manipulate the outcome of the election too?

Lynch: "After an intense week long investigation we have determined that Comey acted unethically and his unprofessional behavior had a legitimate impact on the election."

Democrats are incensed....protests turn to unrest, unrest turns to riots and marshall law. Election is postponed until there is peace.

Its probably not as complicated as you put it but simply ,they are going to have this buried so deep and for so long that one of Obamas kids will be running for POTUS and able to pardon a few close friends that get convicted. 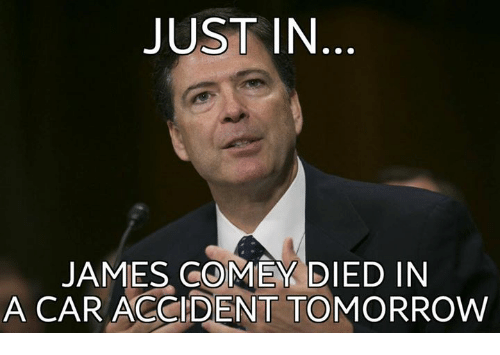 "Comey was found dead yesterday in the early hours from an apparent suicide. Although still under investigation, sources within the bureau suggested he had fired a single round to the back of the head.

Reports to 911 dispatch suggests multiple shots were fired but investigators believe it was an echo of sorts and/or mass delusions.

Source: CNN
Most trusted name in news.
edit on 12-1-2017 by Rosinitiate because: (no reason given)

So the justice department, whose head, Loretta Lynch, has a secret meeting with the woman she is investigating, Hillary Clinton's husband on a tarmac, and yet still will not officially recuse herself, is now criticizing James Comey for not recusing himself!


They will be making an official report dated Jan 20th.

The irony in the title is most telling; 'DOJ to investigate FBI' --->

Too many scratches, will leave it at that.

According to the statement from Horowitz, the investigation will focus on allegations that the Department’s Assistant Attorney General for Legislative Affairs — Peter Kadzik — improperly revealed details about the investigation of Hillary Clinton’s private email server.

The Kadzik emails were discovered as part of the published Podesta emails from Wikileaks.

Kadzik, a close friend of Podesta, emailed him on multiple occasions about the investigation and met him socially several times during that time.

who has the most to lose from exposure ?

The problem of Witch Hunting is that, once you go looking for them, there are often far more of them than you expected.

Hopefully we will learn more about such interesting subjects as..

How to manipulate the Democratic selection process.

This has bothered me. How is it possible that we are told that the Ruskies hacked us and at the same time Hillary's home-brew basement server was essentially impenetrable.....?

This has bothered me. How is it possible that we are told that the Ruskies hacked us and at the same time Hillary's home-brew basement server was essentially impenetrable.....?


Honestly when you really think about it, the only way this can be true is that none of the elected officials really have a say. They are genuinely puppets in theater playing their roles. Otherwise if our security was dependent of Hilary's ability to keep state secrets....We'd be #ed right now. Russia would have destroyed us.