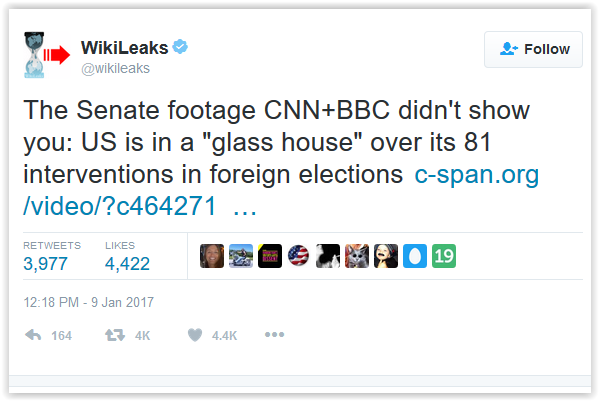 Here is the video link: Senator Thom Tillis: 81 US interventions in elections

He goes on to say Russia did so 36 times since WWII.

Leaving all of that aside, it's interesting to me that this tweet is really an attack on CNN and the BBC's coverage of these remarks.

ETA: Btw, Julian Assange is doing a Reddit AMA, which is supposed to be live at 9am est: I am Julian Assange founder of WikiLeaks -- Ask Me Anything It hasn't started yet, but his responses will be live by video here: www.twitch.tv...

Thanks for the heads up and the link to the live feed . Its on and should clarify some of the rumors about him being murdered or missing .......

United States involvement in regime change has entailed both overt and covert actions aimed at altering, replacing, or preserving foreign governments. In the latter half of the 19th century, the U.S. government undertook regime change actions mainly in Latin America and the southwest Pacific, and included the Mexican-American, Spanish-American and Philippine-American wars.

At the onset of the 20th century the United States shaped or installed friendly governments in many countries including Panama, Honduras, Nicaragua, Mexico, Haiti, and the Dominican Republic.

In the aftermath of World War II, the U.S. government expanded the geographic scope of its regime change actions, as the country struggled with the Soviet Union for global leadership and influence within the context of the Cold War. Significant involvements included the 1950 Korean War, the 1953 Iranian coup d'état, the 1961 Bay of Pigs Invasion targeting Cuba, the Vietnam War, and support for the Argentinian Dirty War, but included other operations throughout the world.

Also after World War II, the United States in 1945 ratified[1] the UN Charter, the preeminent international law document,[2] which legally bound the U.S. government to the Charter's provisions, including Article 2(4), which prohibits the threat or use of force in international relations, except in very limited circumstances.[3] Therefore, any legal claim advanced to justify regime change by a foreign power carries a particularly heavy burden.[4] Following the Dissolution of the Soviet Union, the United States has led or supported wars to determine the governance of a number of countries.

Stated U.S. aims in these conflicts have included fighting the War on Terror as in the 2001 Afghan war, or removing dictatorial and hostile regimes in the 2003 Iraq War and 2011 military intervention in Libya.


Here is a relevant article from Wikipedia.
Truly, the United States is the foremost meddler in other nation's affairs, that the world has ever known.

posted on Jan, 10 2017 @ 10:06 AM
link
Well he is alive and doing ok and gave some good info . While he was using the bitcoin identification to confirm a live real time conversation I thought that he could pick a random thread at Reddit or ATS and quote the last comment in the forum post ...

The U.S. is a power hungry nation hellbent on imperialistic domination of monetary and legislative power/control.

Most interesting seeing them link in GlobalResearch.ca!

The biggest pro-censorship tool I can think in this site, and the one whom never seems to memorize any important facts (and even less when it comes to important perspectives) as moving forward in discussions, loves to march about the site straight up labeling GlobalResearch.ca as an outright state run Russian propaganda operation (to be censored)! Despite having not one single shred of evidence to support the assertion, the (person?) goes about asserting the claim as an outright fact.

And there it is, even Huffington Puffington Post is capable of seeing & linking truth when it comes down to it (from time to time anyways).
edit on 10-1-2017 by IgnoranceIsntBlisss because: (no reason given)


Although it is more towards the direct military intervention side of things, but what is election rigging compared to literally blowing a country up, afterall?

Another good one is War Made Easy - How Presidents and Pundits Keep Spinning Us To Death (2007), which is top level in exposing the propaganda techniques to drive us to war. 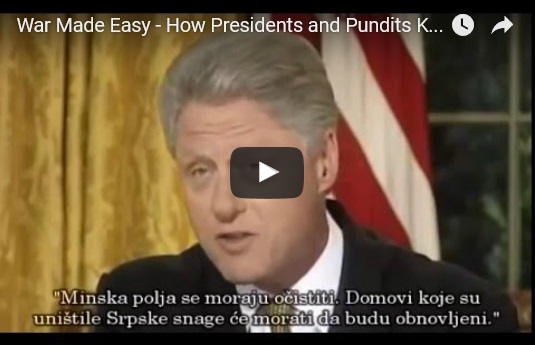 Now note those are more about proper military interventions, which by the way only comes when the schemes and treachery of the CIA doesn't get the 'jobs' done.

So getting more into that ugly scene comes Manufacturing Consent: Noam Chomsky and the Media (1992)

To really understand how the behind the scenes stuff works comes "Confessions of an Economic Hit Man: How America Really Took Over the World (2005):


Confessions of an Economic Hit Man
"Economic hit men (EHMs) are highly paid professionals who cheat countries around the globe out of trillions of dollars. They funnel money from the World Bank, the U.S. Agency for International Development (USAID), and other foreign "aid" organizations into the coffers of huge corporations and the pockets of a few wealthy families who control the planet's natural resources. Their tools included fraudulent financial reports, rigged elections, payoffs, extortion, sex, and murder. They play a game as old as empire, but one that has taken on new and terrifying dimensions during this time of globalization."

According to Perkins, he began writing Confessions of an Economic Hit Man in the 1980s, but "threats or bribes always convinced [him] to stop."

In the book, Perkins repeatedly denies the existence of a "conspiracy".[4]

"I was initially recruited while I was in business school back in the late sixties by the National Security Agency, the nation’s largest and least understood spy organization; but ultimately I worked for private corporations. The first real economic hit man was back in the early 1950s, Kermit Roosevelt, Jr., the grandson of Teddy, who overthrew the government of Iran, a democratically elected government, Mossadegh’s government who was Time‘s magazine person of the year; and he was so successful at doing this without any bloodshed—well, there was a little bloodshed, but no military intervention, just spending millions of dollars and replaced Mossadegh with the Shah of Iran. At that point, we understood that this idea of economic hit man was an extremely good one. We didn’t have to worry about the threat of war with Russia when we did it this way. The problem with that was that Roosevelt was a C.I.A. agent. He was a government employee. Had he been caught, we would have been in a lot of trouble. It would have been very embarrassing. So, at that point, the decision was made to use organizations like the C.I.A. and the N.S.A. to recruit potential economic hit men like me and then send us to work for private consulting companies, engineering firms, construction companies, so that if we were caught, there would be no connection with the government.
— November 4, 2004 interview"