Only in the USA: 22 years in prison for stealing tv remote

Eric Bramwell, 35, was found guilty of burglary in November for stealing a universal remote control from the common area of an apartment building in Wheaton, Illinois. On Wednesday, he was sentenced to 22 years in prison.

"Mr. Bramwell's illegal activity and his history have finally caught up with him," DuPage County State's Attorney Robert Berlin said

By law, Bramwell must serve at least 50 percent of his sentence

First of all, yes, the guy has a long history of burglary and theft. Apparently he has a habit of stealing tv remotes, among other things. But sentencing him to 22 years in prison? Why? It just seems inhumane to me. By law, he has to serve at least 11 of those before he even becomes eligible for parole. Rapists and child molesters get less time. Who did this guy hurt by stealing a tv remote from an apartment complex? Sure, he may have temporarily inconvenienced a few people, but he didn't harm anyone. He didn't murder anyone. He stole a tv remote. 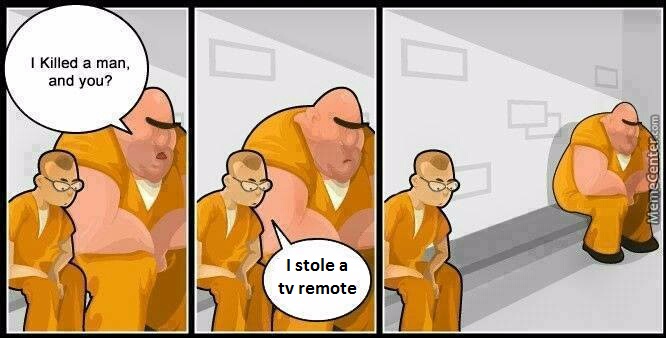 posted on Jan, 10 2017 @ 02:22 AM
link
It does indeed seem excessive for a TV remote, who the feck even presses charges or calls the cops over a TV remote?

Was he currently wanted for other crimes?
Im guessing theres alot more to it and it was just the TV remote that led the cops to him.

SlowNail
+6 more
posted on Jan, 10 2017 @ 02:24 AM
link
Your source says he was the ring leader of a burglary gang. He was banged up for being a life long thieving git. His latest crime just reinforced that. He's where he belongs.

originally posted by: trollz
Eric Bramwell, 35, was found guilty of burglary in November for stealing a universal remote control from the common area of an apartment building in Wheaton, Illinois. On Wednesday, he was sentenced to 22 years in prison.

There's a lot of injustice in justice.

Usually, there's a "materiality" consideration. Was the item taken of material significance? How significant.

In Italy, if a hungry person breaks into a grocery and steals food, it's no longer a criminal offence.

The Judges have ruled that stealing to satisfy hunger is a justifiable action that is not punishable under the law.

If you steal more than you need to eat, however, that's jail-able.

So, its about "material" consequence.

In this case, the judge should have sentenced Eric to community service, and required him to serve as a security guard for a number of years. Making him see things from the other side of the fence, would probably be more help in turning his habits around, than locking him up.

posted on Jan, 10 2017 @ 02:29 AM
link
The judge should've given him a sentence more fitting for the crime.
Perhaps 3 years in prison with a tv behind a protective cover and no remote. 1 channel or maybe randomly selected by the guards.

That should help him reflect on why other's may want to have their remotes handy and not stolen.

Wouldn't surprise me in today's golden age of thought if there's people out there that think this is a good idea for some strange reason.

originally posted by: IgnoranceIsntBlisss
I dont have time to read the source(s), but I suspect that a $5,000 attorney would mean like waaay less time.

Yer anyone charged with anything and doesn't lawyer up is a damn fool!

They sort of makes it sound like he picked up a remote from a common room and they through him in in jail for 22 years, the story also mentioned he was wearing gloves. He probably hasn't been jailed because he stole a remote but because he was probably committing a burglary, and he is a repeat offender.

looking at the local laws.

Residential burglary Illinois also has a law criminalizing residential burglary, which is entering or remaining in someone else’s dwelling without permission in order to commit theft or a felony inside. A person who breaks into a home intending to steal a television commits residential burglary. Residential burglary and burglary are mutually exclusive offenses, which means that a defendant commits one or the other, based on the nature of the burglarized building. The offense can also be committed by someone pretending to be an employee of the government, a construction company, or a utility company, in order to commit a crime inside a dwelling. A dwelling is a house, apartment, mobile home, trailer, or other place in which a person lives or soon intends to live. For example, vacant and uninhabitable buildings are not dwellings, but an RV in which a person lives is a dwelling, as is a new home ready for occupancy. (720 Ill. Comp. Stat. § 5/19-3.)


Burglary is a Class 2 felony, which can result in a prison term of three to seven years. Burglary of a residence, school, day care center, or place of worship is a Class 1 felony, punishable by four to 15 years in prison.

Police may have been looking for this guy for ages and since they have him on some rather naive charges they have used it to get him his day in court where the judge has handed down a massive sentence due to previous activity..

posted on Jan, 10 2017 @ 03:36 AM
link
commit a felony serve 3 months hard labor,(why waste taxpayer money on lengthy sentences, if they commit another felony they will be 1 felony away from death)) commit a 2nd felony get 6 months hard labor or military, commit a 3rd felony automatic death penalty. this will clear out the prison system and make our streets safer. right now prison is like college for criminals, we have the highest incarceration rate on the planet, i would hate to think how much money it is costing us taxpayers to house, clothe and feed all the prisoners.

originally posted by: AMPTAH
In this case, the judge should have sentenced Eric to community service...

He's a lifelong repeat offender. The judge just had enough of his #.

1) I am surprised that the police did anything more than write up a report about a missing TV Remote, when they attended the crime scene...with all of the serious violent crime going on in Chicago and area, they had time to pay this more than a perfunctory notice?
2) So, somebody left a glove behind in the common area of an apartment building...in and of itself, not exactly a smoking gun (my wife leaves gloves behind everywhere!)...and the authorities decide that they ought to go to the time, trouble and expense of running a DNA test on the glove - for the case of the missing remote?
3) When they mount a dragnet for the perpetrator of this heinous crime, bring in their suspect and take him to trial...the judge decides that the appropriate punishment (which taxpayers need to foot the bill for) is 22 years in jail?

Bramwell is obviously a bad actor, and deserved repercussions for taking someone else's property...especially given his lengthy criminal record. But a 22 year sentence certainly is excessive, for what amounts to a very minor offence. I assume that he will get a lawyer appointed to appeal the sentence.

Had he been wise, he would have had his name legally changed to Eric Clinton before standing trial...

It's possible that he had multiple thefts, burglaries, etc. and he was already on probation with a 25 year sentence hanging over his head.

Now if this guy had a squeaky clean record and then was sentenced to 25 years for stealing a remote, then I would feel more sympathy. And he would be able to sue the Police Dept.


Only in the USA: 22 years in prison for stealing tv remote

No, he was sentenced to 22 years for a class x felony, six burglaries, after half a decade's criminal activity.

There was a reason the state of Illinois they had his DNA on record.

originally posted by: evc1shop
The judge should've given him a sentence more fitting for the crime.
Perhaps 3 years in prison with a tv behind a protective cover and no remote. 1 channel or maybe randomly selected by the guards.

That should help him reflect on why other's may want to have their remotes handy and not stolen.


Sorry but this POS is a repeat offender. He has been given more than enough chance to reform.

He has shown he is incapable of living amoung civilised people so needs locking long tetm up for society protection.

Dont want to go to jail for 22 years then dont make thr choice to be a career criminal so that when you are eventually caught doing sometbing dumb, like stealing a remote, they throw the book at you...

Personal accountability, nope it's just easier to blame the police, justice system and since it's ATS I would suspect Obama also..

Police officers have a quota handed down by their superior officers, in turn this quota was haded down to a police chief by a county or city official. The city or county officials have made back door deals with private or state prison officials, this deal provides financial kick back to the city in which the prisoners come from. This provides the prison system with slave labor at next to nothing, and state and federal subsidies for the care of the slave. It's not the officer who decided the term served for the offence. His job is to collect slaves.

If that's not an ethical problem with our society, then our society has no sense of ethics.
edit on 10-1-2017 by Underfire2 because: (no reason given)