My Brother recorded this clip a few days ago, I am wondering if anyone else in the West Midland had heard it as well?

Although I didn't hear it this time I have heard this sound a handful of times over the years and at different locations around the country.
I have yet to read of a satisfying cause for it.

Possible causes that I have seen offered up are:-

posted on Jan, 8 2017 @ 06:35 PM
link
Well one thing is for sure, it has been heard and recorded from enough different places around the world to now be able to rule out hoax, or someone playing a bad instrument in the back ground.
Strange it has only really started since what? Maybe around 2011-2012 or so?

I'm sure this has nothing to do with anything, but since it did just happen again when I played this video, it reminded me it has happened in the past. My cat was sleeping soundly and it perked right up and was very interested in what the sound was.

Lol we are in trouble if it's the cats mothership coming for them...
edit on 1/8/17 by onehuman because: (no reason given)

posted on Jan, 8 2017 @ 08:29 PM
link
a reply to: Tagz
Not long ago there was a thread about sky trumpets out of Wyoming. I still think that they are likely natural earth sounds in the same vein as "earthquake lights". You might do well to get supplies.

wow nice you got it..

I heard them too after I knew they were a hoax.. Lol..

definitely not a hoax.

And the sound made something in my brain go off primal. My cat was no where to be found. Well not that I was looking as the sound was there but after I did. I didn't want to move. Felt like vulnerable or something like that. IT sort of sounds like the scene in the movie right before something bad happens, like aliens invade or war trumpets something.. Haha.

It's gotta be something that happens anywhere in the world so I think it's natural, but I don't recall this happening in the past. the first I heard of it was 2011.

It's not something you can describe to someone who hasn't heard it. So I went online to explain to my at the time girlfriend. and my cat looked at me like I was satan and ran away and after I played 2 or 3 videos trying to tell her which parts of each video sounded the closest she made me stop she was freaked way out not from the fact I heard them in real life and they are real but jsut the sounds themselves..

I had to use headphones from then on.

posted on Jan, 8 2017 @ 09:04 PM
link
Man, i would love to hear these Sky Trumpets in person. Have listened to plenty of videos. Must be spooky as hell. Especially if it doesn't really sound like anything man made.
edit on 8-1-2017 by MiloTheMarauder because: God wills it.

posted on Jan, 8 2017 @ 11:18 PM
link
Hmmm, now that is kind of interesting. Already two of that have had a cat reaction. Both of us more than once. I now wonder how many others have had their cats react as well. Did their dogs too? Or just the cats?
I know my cat can sleep through a lot of different things going on and not be bothered at all in the usual cat way of things. Any cat owner knows what I'm talking about, but this definitely got his attention though he didn't run and hide. Just from sleep to VERY alert.

For those of you that have heard this, did you notice anything else about the animals in the neighborhood or just your own? Do dogs go hide? I'm really just curious because animals do seem to react to danger Will Robinson type things like before a earthquake etc..

I admit I have only heard the sounds since they have been popping up on the Internet. They do leave you with a "feeling" though. Like utoh this can't be good. Seems to me if it was a natural nature kind of thing we would have been hearing it long before 2011 or so. It would be something more like oh you heard the such n such today. Strange to be such a new nature phenomenon.

Would really like to hear more from people that noticed anything about their animals though. Don't recall in all I've read about this sound that they have ever really come up in the subject or were considered. Be curious about birds too. What do they do?

posted on Jan, 9 2017 @ 12:48 AM
link
Anyone know of any historic records of these sounds?
It'd be best to look at the past and see if these sounds could have occurred or even been heard for hundreds or thousands of years, in order to have a better assumption.

my cat grew up when me and my ex were in college.. Parties at our house a lot. Incredibly loud music. People playing with him turning him upside down and all of it. fireworks.. Thunderstorms.. He liked thunderstorms actually. HE was a lot of times the center of attention for the people in the living room. He's a party animal.

He looked at me like "wtf?!" (in full clarity a recording of the sound from others, as I explained before)

gone (could not find him for an entire day)

here he is btw: 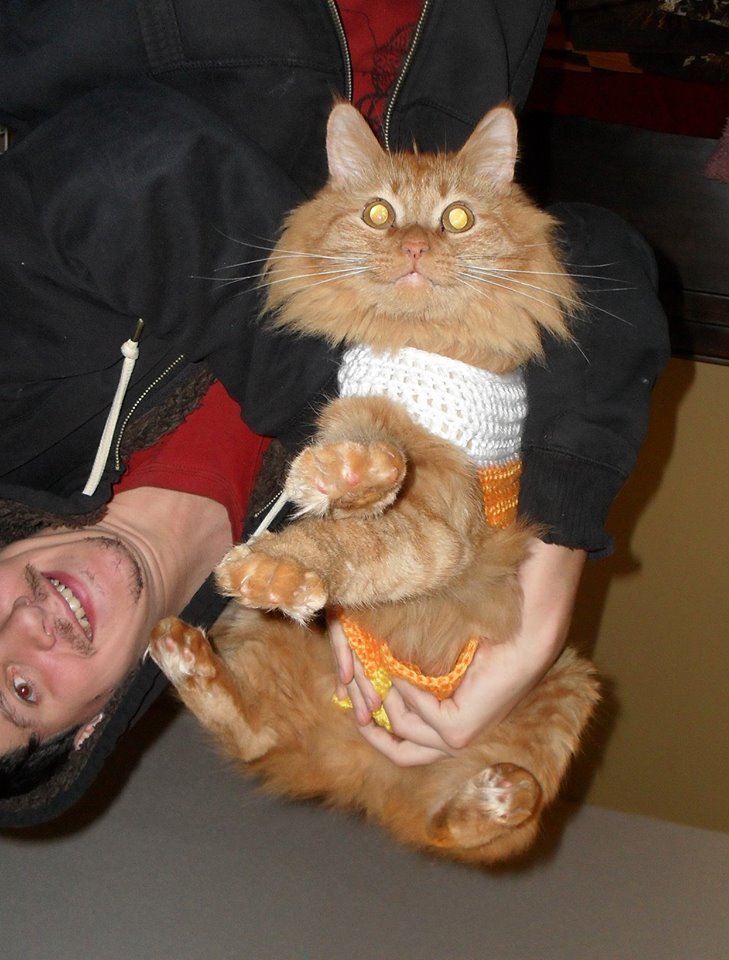 he's upside down not me. Chillest cat ever.

That sound made me want to hide under the bed too. can't really say why..

Exactly when I heard the sounds this was happening:

So my experience was March 13th about 2:30am 2012. Other people in Jersey were hearing the same sounds around the same time. That's similar location east to west, same time zone.. Same angle to the sun as far as sun rise and such..

my opinion would involve this as well:

originally posted by: Tagz
I have yet to read of a satisfying cause for it.

Possible causes that I have seen offered up are:-


I don't think there's a single cause for all the strange sounds we hear, I think there are many causes. I don't know the cause of this one of course but the fact that it's a single frequency and the wind is blowing means you should probably add helmholtz resonance to your list of possibilities. This video demonstrates it with a bottle but for the sky noise it wouldn't be coming from a small bottle but something larger that makes sound when the wind blows in a certain direction at a certain velocity.

For the bottle and the source of the sound in the OP video, there is a specific resonant frequency. It doesn't need to be public works, it could even be a vent pipe for a home or apartment building plumbing system, but since it seems to be a fixed frequency the helmholtz resonance would seem to fit as one possibility.

By the way even sand can make noise when the wind blows over it but it's not at a single frequency like the OP sound. In this singing sand video you can hear variations in the pitch of the singing sand.

edit on 201719 by Arbitrageur because: clarification

posted on Jan, 9 2017 @ 08:34 AM
link
I just wanted to pitch in here as me and my son heard these sky noises over Warrington (just outside Manchester UK) about 4 years ago.
He was upstairs in his bedroom and came belting downstairs and threw the living room window open and said "come and listen to that noise that's going all over the internet". Yeah right, I thought.

OMDG!! There it was...and LOUD! It was spooky and eerie to say the least. Up till that point I was very skeptical. Not any more.
I suppose it's a bit like wanting to believe in UFO's but wont really until you see one.
My son was 15 at the time, and very science brained, so it blew him away.

originally posted by: JohnAlexander
Not limited to sky noises. Remember the Taos hum? I was at Los Alamos at the time. Our sister lab, Sandia National Laboratory got involved. It was determined to be real and measurable, but no point of origin located. It seemed to defy the normal physicals laws of decreasing effects over distance.

Haven't checked if Sandia National Laboratory released any official documentation on this though, but Alexander's reply is interesting and the phenomenon does seem to have some merit.

I don't know if this instance is comparable to the Taos Hum.

originally posted by: Droogie
I don't know if this instance is comparable to the Taos Hum.

As said a lot here on ATS... "The Hum" comes in many flavors from various sources. Some of the sources are mundane, other cases of the hum are completely unexplainable as of our current science.

Explainable cases include underground electrical, above ground electrical/transformers, ambient air resonance through and around buildings, and even resonance from a busy highway miles away, but other cases of the hum where none of those explanations seemed to hold up do exist, I've witnessed them personally.

I've tossed around the theory of some unexplained noises coming from something electromagnetic... perhaps having to do with the magnetic fields.

I believe, like the hum, these sky noises can come from various sources, but not all of them are explainable... at least, not yet. They are very spooky.

Just wanted to pitch in. Absolutely no reaction from any of my 3 cats. All of them still chilled out and/or asleep right next to my laptop. Played the sound 3 times to be sure they heard it.

posted on Jan, 9 2017 @ 02:29 PM
link
I heard some rumbling in the sky a couple days ago, it wasn't natural, kind of like being in a war of the world movie waiting for aliens to fly down outta the sky.

Could just be Sky God's kicking furniture around again too.


The noise here was several different tones i different lengths. Minimum wind, conditions were cold wet.
Rob
edit on 17-1-2017 by robd2017 because: (no reason given)

originally posted by: slapjacks
How many reports of the sky sounds have been recorded, on different events?


This link here will show you about 90 reports which include news stories and videos as well.

they were old links of course but damn that sucks.
edit on 17-1-2017 by Reverbs because: (no reason given)

originally posted by: stelth2
a reply to: Kuroodo

yes I live in North Carolina, and sometimes that just happens.. It's a different sound. that one sounds like Navy guns or something.. Sometimes it does, and other times it's like a few bombs went off or there is an invisible thunderstorm lol.. NC is weird.

my windows have been rattled by whatever it is...

That like the sky sounds which are clearly not the same thing both in my mind have natural explanations.. I think the sky sounds are some type of plasma acoustics, and the rumbling and thunder window shaking of the "seneca guns" seems earthquake ish.. But nothing ever shakes when it happens just rattling windows like it's something in the air.. So

who knows but I stand by the theory I posted for my own experience.
edit on 17-1-2017 by Reverbs because: (no reason given)