A kiss tells everything

I heard a quote once;" A kiss tells everything ". The concept of the quote, is strictly metaphorical, since no one really coined the phrase, im gonna state it was philosophical statement that included thousands of hours of research..
--

Human Pheromones: The Science Behind the Scent of Attraction

Osmology, or the science of smell research ( if you can call it a science ), has determined that men and women are attracted to each other via selective chemical messengers called pheromones.

These are arousal-stimulating chemicals that signal sexual desire, sexual readiness, hormone levels, fertility and the deepest emotions. When released by the body, certain pheromones can work like magic to attract members of the opposite sex.

Pheromones are primarily perceived through olfactory sensors, and studies suggest they are excreted by several areas of the body, including the skin, sweat glands, saliva, and urine.


Tristram Wyatt: The smelly mystery of the human pheromone
--

edit on 1.8.2017 by Kandinsky because: Added ex-tags to external text quotes

No offense but this is a pet peeve of mine and not sure if it violates ATS terms or conditions. 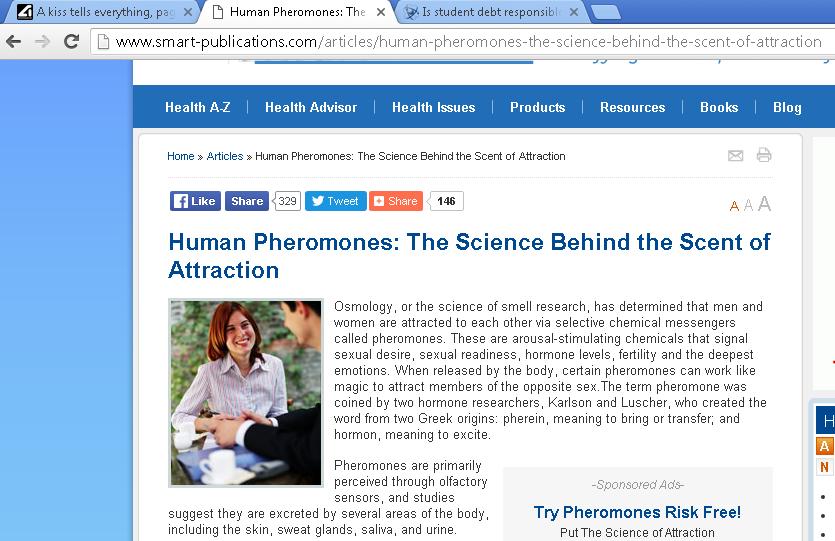 my own ideas are controversial, and i dont think they would be appreciated..

my own ideas are controversial, and i dont think they would be appreciated..

That is why this is a forum so that you can talk about subjects objectively and holistically. There is never a correct perspective, but only a perspective. It will be up to you to see what conclusion you come up with based on what you take away from opinions from various ATS members. But never copy and paste from articles without quotes...otherwise what you should do is summarize the article in your own words and then add questions and some of your own views on the article to get input from others (good, bad, neutral,etc...you get the idea)

My thoughts, When we mix saliva, in a kiss, i believe it tells us more than we realize.. Genetic compatibility, healthy, sick, if our offspring has the right genes for survival.. I believe our gut feeling tells us the right answer, its up to you to listen to it..
I believe the pheromones in the saliva will tell a great deal when mixed together..

My thoughts, When we mix saliva, in a kiss, i believe it tells us more than we realize...I believe the pheromones in the saliva will tell a great deal when mixed together..

I can tell what you had to drink prior to kissing or if you are a smoker or not...lol. Aside from that...mixing of saliva really means mixing of proteolytic enzymes used in the primary line of food digestion...that said, I can tell a lot about someone if they have poor dental hygiene....halitosis is the worst and I will never kiss someone who has this ....bleh~

I cannot give this thread a flag....or your OP a star unless you put in the necessary quotes and your ideas...but will follow your ideas through related posts as it relates to your OP.

i thank you for the input, you just reaffirmed my mentors approach when dealing with science ...

i thank you for the input, you just reaffirmed my mentors approach when dealing with science ...

Huh??? I am confused....what mentors approach?

One more thing...I believe we were all born to be Gods on Earth...in fact you are a God of your own body well wouldn't you know!

has the topic proggressed any ?

posted on Jan, 8 2017 @ 03:38 PM
link
The entire thing is actually pretty interesting in a possibly abusable sort of way.

Your olfactory sensors are actually sort of modified brain cells, they feed right into your emotional systems and memory with little filtering at all. It's how some really awful diseases get into your head - they can burrow through into your limbic system, hippocampus and hypothalamus from there. But I digress.

You can smell a number of various types of scents, in combination they tell you something's chocolate, or rotten meat or whatever. But there are a lot of chemical structures that you have sensors for that do NOT elicit scent perceptions. If you sniff one, your brain lights up on FMRI but you don't have any perception of smell. What's THAT for?

Some are obviously chemoreceptors for what appear to be sexual pheromones. But a lot of them aren't. The Army got interested in that some decades back and started doing a lot of research into what that might have been for - it's a natural for military/intel work - the system as a whole bypasses your cortical filtering and goes right into your operating system, so to speak, dodging the 'virus scanning' of the rest of your mind.

Ever eat something when you were coming down with a virus, and you could never eat it again? Even though you once liked it and you know it wasn't to blame? That's this system coming into play with food avoidance. The original intent, as far as anyone can tell, is to memorize, quickly and permanently, any food that might be poisonous. So as a young Neanderthal, if you ate the pretty purple berries and they tasted like burning, if you didn't die, you wouldn't need to memorize the appearance, odor or taste - this system goes right into the memory and emotional centers and bangs it in there with a chisel so you never try them again.

So, why were the Army and other TLAs interested? They hoped to find some neutral scents that triggered crippling emotional states - terror, flight, nausea, hallucinations, uncontrollable rage and the like. Anything you might be able to elicit by screwing up intense memories or emotions. The right neutral scent might be able to bring on the zombie apocalypse, or something like "28 Days Later". One might be able to drop a neutral scent device into an enemy garrison and have them all kill each other. Or go to sleep. Or be crippled by hallucinations, lose sense of time, or be trapped in a vivid memory loop or what not. How could you go wrong?

Personally, I think it's why people see 'ghosts'. Not that that wouldn't be a GREAT thing as a weapon, as well. If you were standing a post and it was all of a sudden "13 Ghosts" non stop, that would be pretty incapacitating.

Having grown up in a haunted house i feel once exposed to the phenonena you will always be able, if your paying attention enough to your senses, if your in another location with paranormal or haunted activity.

What triggers me and ques me in is a faint smell thats not really there, a phantom smell if you will, of dry rot or musky still air. It feels claustrophoc and oppressive and somehow like death. Although nothing like actual death or rot. I cant describe it, but i can tell it distinclty as a unique scent.

Ive never been wrong yet.

What triggers me and ques me in is a faint smell thats not really there, a phantim smell if you will, of dry rot or musky still air. It feels clostrophoc and oppressive and somehow like death. Although nothing like actual death or rot. I cant describe it, but i can tell it distinclty as a unique scent.

Very interesting and scary at the same time. I sometimes get the same sense as you do...only when I notice it I also notice the dishes needing cleaning in the sink

Ah you must be visiting my sisters house then.

I just wanted to hear you thoughts on this, ive seen dogs mix pheromones, often using their paws and one of their signatures, mouth, ear or urine..
Do you think certain pheromones are behavorial conditioning without a enforced trauma?