posted on Jan, 7 2017 @ 08:58 PM
link
Shouldn't come as a surprise, what's interesting the article brings to light, the US is financing and training terror groups on both sides of the conflict. It seems most of these rebels fighters, in many instances fighting each other, are enabled by US tax dollars.

As with all left-wing terror groups:

Dissent is not tolerated.

Photos of Ocalan loom over town squares and in public offices, much in the way Assad’s portrait dominates areas the government controls.

Of course, these are the hard left radicals, a 'stateless' government, except when they take power the God-like leader figure will be the government. Except they are being used by the Obama admin to enter into Aleppo and continue the destabilization and destruction of Syria.

As U.S. Special Operations troops looked on, Abu Amjad al-Adnan, commander of the Manbij recruits, rallied the soldiers to take the fight to the forces backed by “terrorist Turkey.”

Something for people to consider, how the nobel peace winner Obama manipulates both sides to destroy themselves, not only here at home but abroad as well:

I cannot remember who posted this up, but your OP made me think of this.... 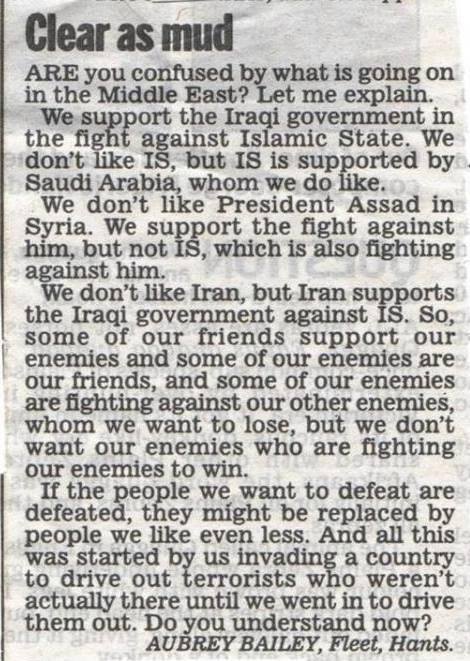 posted on Jan, 7 2017 @ 09:17 PM
link
So that's the new narrative, huh? Now the Kurdish people will be branded as "leftists" and a "left wing terror group" in order to justify our incoming govt's potential treatment of them? Hmmm...

Just so you know, the US govt has worked both with and against the Kurdish people for decades, sometimes at the same time. We backed them during the Iran-Iraq War in the 80s (under Reagan), then sat back and let Saddam massacre them in 1988 when they followed our suggestions to revolt. We backed them after "Operation Desert Storm" in 1990-1991 under Bush 1, and then set up "no fly zones" over their territory under Clinton.

From then it's been a mix of supporting their enemy (and our NATO ally) Turkey and supporting/arming their organizations. We arm them right now because they're one of the few groups that have been actively fighting ISIS and Al-Nusra Front. (Those groups have committed many atrocities against the Kurdish people during the Syrian Civil War, btw.) But I guess since Al-Nusra's recently undergone a rebranding, their enemies are no longer our allies?

It's ok, Obama admin also funding al nusra, you can rest assured now. My qualms aren't with the Kurdish people, I do not support aiding any side, especially when the entire reason for the conflict is due to US funding and arming both sides in order to fight. You should read the article, the story goes over one group of rebels being funded by the US, who happen to be Marxists, even down to the huge pictures of Dear Leader in the city streets.

Pretty much sums it up and makes it clear as crystal

My take on the situation:

After the fall of the Soviet empire, the US had no natural enemies. The Soviet Union worked as a counterbalance in the middle east, funding Arab communists to fight proxy wars against the US funded Arab fascists. Now that Russia is a ghost of its' former self, and the funding for the opposition in the Middle East is not on par with the US, the US has to fund the opposition in order to legitimize interventions.

I find it hard to get my mind around US policy in the middle east .I mean that I can understand the petro-dollar link and how that matters and even the considerations for Israel to a extent .My confusion is the tail wagging the dog for the most part .Its like there are 3 forces at work and the one we should really be afraid of is the one we cant see and know little about .