"If you're a Trump-voter, you gotta feel sick to your stomach," so say Young Turks

Predator was some of Michelle Obama's best work.

Remember at the end of the movie when she was spitting out that green stuff and said to Arnold: "You're one ugly m##########." and activated the self destruct thing on her arm?

Almost as powerful of a performance as "her" coming out music video "Supermodel".

nwtrucker - He is playing a dangerous game.

If he was smart enough he would have understood that he has the office simply because the very same Intelligence Agency Personal that ran interference for him (like reviving new email scrutiny on the Clinton side 10 days before election) are now on the 'other side' stating potential pre-election scandal.

Which, I predict, will sooner or later be amplified to potential 'Russian Coercion'.

Because he is not the man they want.

If there is scandal we will not have another election, as we have laws for this. Instead, Pence gets the nod, or if that one is turned as well, then Ryan etc... In all cases it will stay squarely RNC endorsed.

The machine has embraced him long enough to get most of itself in place. Now for the end game.

That's the game I see developing.

Does Keith Olbermann or the Republican reps think that Trump is any different now than he was before the election? If he was so horrible, why did thy even allow it to get this far?

Did their grand plan backfire? Did they think if they ran someone this "deplorable" against the candidate that they knew the American people would reject, that they would close their eyes and hold their nose, while they were force fed a candidate that they did not want?

If the candidates the American people were given to choose from was the best that America has to offer, than America died a long time ago. This dog and pony show they called an election did nothing but pull back the curtain to expose her corpse.

I'm going to wait until he actually does something before I start pissing myself in fear and tearing down the fabric of society and turn to looting.


originally posted by: JoshuaCox
You know the group of traitors who rebelled against America and killed thousands of us service members.

originally posted by: GodEmperor
a reply to: JoshuaCox 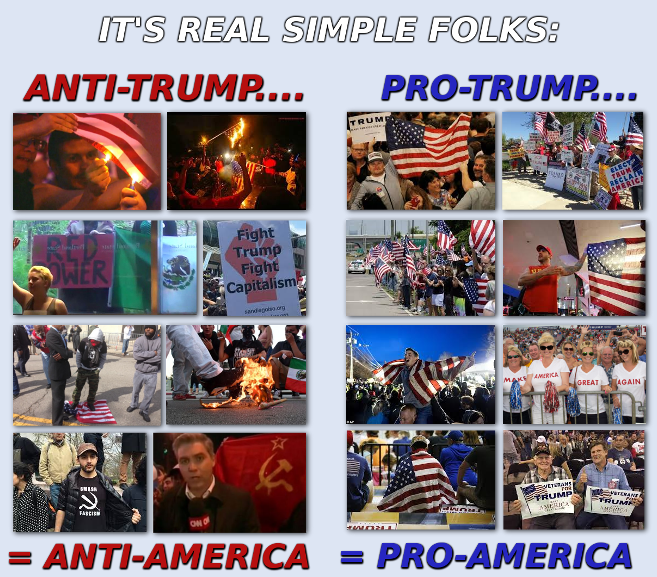 The visuals above depict the vision of pro-Trump people, BUT NOT THE TRUE VISION OF TRUMP, HIMSELF.

As far as guns and gun control go, I'll have you know that a key component of malignant narcissism is PARANOIA.

Just a few of Trump's tweets-before he is even sworn into office-are helping the nation (at least financially) than 8 years of Obama.

Besides-anything is better than an America hating muslim traitor.

Hell,having a purse snatcher as president would be better than the liberal man-child Obama.

originally posted by: theworldisnotenough
"If you're a Trump-voter, you gotta feel sick to you stomach," so say Young Turks at elapsed time of 2:05 of the following video:

The statement above was induced by disgust over The Donald's prolific appointments of people who are associated with Goldman Sachs, this pretty much on the heels of Trump’s prior faulting of Hillary Clinton and Ted Cruz for having major connections to Goldman Sachs, Trump’s appointments being among other ignominious reasons fo knocking Trump.

Oh, there’s even much more in another video that should have stomachs turning over Trump’s being president-elect. See the following Resistance video by Keith Olbermann in which Keith enumerates highly objectionable antics on the part of The Donald, and after each one, Olbermann very pointedly asks: “What kind of man does that?”

Wow, the ratings are in and Arnold Schwarzenegger got "swamped" (or destroyed) by comparison to the ratings machine, DJT. So much for....

being a movie star-and that was season 1 compared to season 14. Now compare him to my season 1. But who cares, he supported Kasich & Hillary

Some respondent in another one of my threads made a ridiculous assertion that recognizing malignant narcissism on the part of someone else would require years of post-graduate study. Balderdash! When, someone is demonstrating blatant evidence of narcissism that is about as subtle as a sledge hammer to the cranium, then mere highlights about narcissism from Youtube videos will suffice to draw definitive conclusions.

Here’s what is blatantly obvious to Michelle Obama: “We need a grown-up as President.”

All in all, ALL of the above should serve as justification for the very loud call for Donald Trump’s stepping down. Too bad that the guy has absolutely NO SHAME, and it has been said that “When there is no shame, then there is no honor.”

At this point, I do believe he is incapable of leading the country. He does not appear to be well. I've long suspected that he has Alzheimer's. I only say that because I have a family member with Alzheimer's who is very close to me and the symptoms shown through their behavior are far past similar. Trump's father suffered from Alzheimer's. Same thing in my family. Father to son.

The twist is that he has zero self confidence and constantly requires approval of his self worth. He appears to be missing many of the traits that qualify a human being as an adult. I don't mean that he acts immature as some kind of insult. I mean that his brain didn't fully develop in certain areas during crucial periods of adolescence due to some kind of genetic or parental (environmental, if that's what you want to call it) failure.

It would be so sad to see him forced out of office due to mental deterioration, but I'd be lying if I said I didn't know any Trump supporters with buyers remorse. This is a growing concern.

"I'm going to wait until he actually does something before I start pissing myself in fear and tearing down the fabric of society and turn to looting."

It would be nice if the left were at least 1/10 as intelligent.

Predator was some of Michelle Obama's best work.

Remember at the end of the movie when she was spitting out that green stuff and said to Arnold: "You're one ugly m##########." and activated the self destruct thing on her arm?

Almost as powerful of a performance as "her" coming out music video "Supermodel".


You must carry a lot of prestige on Call of Duty.

originally posted by: theworldisnotenough
The visuals above depict the vision of pro-Trump people, BUT NOT THE TRUE VISION OF TRUMP, HIMSELF.


You couldn't see the tongue in my cheek? LOL

We all know the 2d Amendment will fall under a Conservative Administration. That's why the (D)Trump was elected from the Republican candidate pool.

Although... i probably wouldnt be talking trash to a guy that killed the Predator.


Theire are no hillary supporters lol, just people who think trump is unworthy of the office.

It was all about stopping trump, the dems just thought they could use the most unpopular dem to do that...

Delusional Bernie Sander supporters lol. Lets see here, he was cheated out of the nomination by the DNC then the head of the DNC goes to work for clinton and yet bernie still endorsed hillary clinton. but yeah he was totally a realistic choice except he was a fraud and basically a liberal plagiarist using the model Ron Paul used. Did i mention he was a sell out? The audit the fed bill bernie helped ron paul write bernie later rewrote last minute and basically screwed over ron paul and the american people before it got passed. Amazingly he runs for president in the next election wow never saw that coming lol.

posted on Jan, 7 2017 @ 11:54 AM
link
Trump is draining the swamp. The ones out of the swamp are ending up on his team. One must remember that Trump is no politician and being careful about the endeavor he is about to undertake will probably cause him to need all kinds of overt and inside information. What better way to accomplish this than what he is doing? IMHO, this is brilliant! Give those crooks some money and immunity, and holy cow, the inside information will flow like the Nile!

You guys on here lamenting what Trump has tweeted about Schwarzenegger and the former shows have got to realize that the main stream media has put their spin on it. He was probably ribbing Arnold, I've always heard they were good friends so whats wrong with that?

They both may have had an inside bet on the show, which will be revealed next week when the MSM calms down...
edit on 7-1-2017 by NightFlight because: had a revelation or was it a condemnation. I can never get those three straight. oh well but I shouldn't say that either.

posted on Jan, 7 2017 @ 12:00 PM
link
a reply to: VengefulGhost
Trumptard comment! Man so many trump supporters are so freaking ignorant. Trump is a big baby, he tweets like a 16 year old girl. I am embarrassed for my country!!!! 2.8 million more people feel the same way I do, than you do. That is a HUGE margin! Trump is unfit for office PERIOD!!!!!

originally posted by: kurthall
a reply to: VengefulGhost
Trumptard comment! Man so many trump supporters are so freaking ignorant. Trump is a big baby, he tweets like a 16 year old girl. I am embarrassed for my country!!!! 2.8 million more people feel the same way I do, than you do. That is a HUGE margin! Trump is unfit for office PERIOD!!!!!


A time will come when they will have to quit trying to rationalize what he says and does. It's already laughable and disturbing, I no longer can tell if people are being serious when they start trying to defend and/or explain just exactly what DJT means. And all the tweeting is just nutty. How can you run a country with 140 characters or less. His off handed thoughtless tweets are just ridiculous. He is the laughing stock of the planet.

I feel like I am living in bizarro world.

Well that certainly is inspiring isn't it.

I'm going to wait until he actually does something before I start pissing myself in fear and tearing down the fabric of society and turn to looting.


You do realize when You look at these real lies with real eyes, that ALL the good snip will be gone by the time You get going liquid?? You'll only be able to steal out-dated crap by then...

Did You see the reports from Hotlanta and that was just due to it getting kinda cold.. When/If it gets to a full-on SHTF scenario, it'll be "curtains"... I'm eye-balling the CVS™ or Walgreens™


Perhaps it's you who isn't taking everything into consideration. There was no real alternative. Period.


Definitely a possibility. I have said from the beginning of this process that Trump's biggest and toughest adversary is the RNC elite.

Lord, does this guy have a big pair. Hopefully, they STILL underestimate him.

Wall-street guys bad. This is the level of argument some have reached. If Trump had been accepting massive donations from these guys, that is one thing, but hiring them for a job is quite another.