posted on Jan, 6 2017 @ 05:51 PM
link
So CNN had a story last October about U.S. Secretary of State John Kerry talking about Syria and ISIS and the Russians.

Apparently they got ahold of some leaked info and didn't expose the whole thing.

Now comes another source with some more audio about Kerry saying the U.S. underestimated ISIS.


CNN originally had up some audio that had been leaked of John Kerry talking about using force in Syria.

But there was part of the audio that was not made public. The entire audio has subsequently been taken down by CNN. The part that was never made public, however, has been leaked. In it, John Kerry admits that the United States saw ISIS growing, which he referred to as Daesh. But instead of doing anything about it, Kerry says the Obama Administration calculated that its growth would lead the Assad regime in Syria to the negotiating table.

Instead, Kerry says, Assad turned to Vladimir Putin for help. Now, I have to tell you, anyone with half a brain would have realized the Assad regime would turn to Russia. The Assad family has always turned to Moscow for help. It is insane that our government was surprised by that. It is also highly irresponsible.

'The War on Terror is over' was fake.

You can bet they saw ISIS growing and did nothing, because for eight years Kerrys party has put their politics above the best interest of this country.

They didn't have a plan for Iraq after the invasion and allowed a power vacuum to develop. In addition, they allowed their allies to fund said terror group to fight their proxy wars in the region.

The US supplied them with weapons and trained them. As far as I'm concerned, they are a branch of the US military, in disguise, running around the planet causing mischief. There is proof of the arms the US provided, and video of the training. In the beginning they were described as militant rebals. Now the US denies any contact, for fear of other countries being angered at what the US had done.

John Kerry admits that the United States saw ISIS growing, which he referred to as Daesh. But instead of doing anything about it, Kerry says the Obama Administration sent john McCain to meet with ISIS and arranged to have weapons, money and training supplied to ISIS under the cover of assisting "moderate rebels".

I fixed it, yep that looks more like the truth. 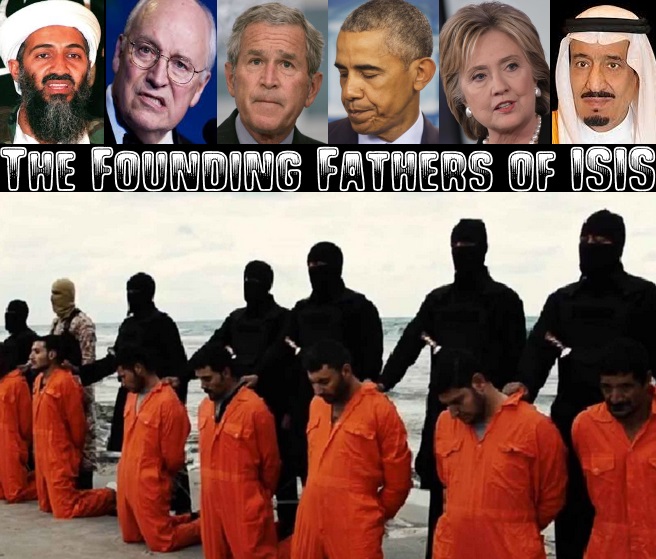 July 2011:
The combative Syrian Uprising begins by the Free Syrian Army vs. the sovereign Assad regime.

August 2011:
Syrian National Council forms in Turkey (a US-NATO ally), and
en.wikipedia.org...
it's membership includes Al-Nusra Front (which translates as "Al Qaeda in Syria").
en.wikipedia.org...
and is formed with the help of ISIS.
The US called for Assad’s resignation.
web.stanford.edu...

June 2012:
"CIA Said to Aid in Steering Arms to Syrian Opposition", operating from Turkey, by way of a shadowy network of intermediaries including Syria’s Muslim Brotherhood and paid for by Turkey, Saudi Arabia and Qatar.
www.nytimes.com...
en.wikipedia.org...

Ignoranceisntbliss your right on the money!


If there were justice in this rotten world all of them and more would be on trial
edit on 6-1-2017 by Willtell because: (no reason given)

Exactly! But informing the sheep does nothing but put the hurd to sleep. Tomorrow someone will be asking our thoughts on joining the service. Lol. I never answer those questions. I figure if they haven't dug up enough info before joining, let the sheep jump off the cliff.

Interventionists in the administration, such as Hillary and Petraeus, advocated arming random terrorists groups already operating (in some cases alongside the Islamic State) in Syria, while simultaneously weakening Syria herself, the strongest opponent to the Islamic State. Obama to his credit wasn't in favour of this ridiculous scheme.

Personally I would've stopped the CIA doing what it was doing, but that's Obama for you.

What we really have here is CNN and possibly the New York Times both busted for a COVERUP of this audio!

A leaked audio of U.S. Secretary of State John Kerry's meeting with Syrian Opposition members at the Dutch Mission of the United Nations was released by Wikileaks this week, exposing a 35 minute conversation that was omitted by CNN.
...
The audio was originally leaked to NY Times in late September. CNN, which is the source (CNN link) for the audio posted here, has since chosen to remove it. www.almasdarnews.com...

It's not entirely clear what NYT did or didn't do by that wording. Did they post an article on this, or what?

Doesn't look like it:
www.nytimes.com...
edit on 6-1-2017 by IgnoranceIsntBlisss because: (no reason given)

Ultimately, while one can give Obama a little credit for not going full hog in Syria it still was his administration and their CIA plots that helped destroy and kill thousands of innocent people in Syria

He deserves Hell along with all of these creeps for that

We armed, funded and trained the "rebels" who would go on to form ISUS.

Senator McCain even flew to Syria to meet them in person.

How many times did we "accidentally" arm ISUS?

June 2015: U.S. Shoots Itself In the Foot By Accidentally Arming ISIS.

October 2016: Arms dealer says Clinton and Obama accidentally gave guns to ISIS, Al Qaeda and Benghazi attackers - then tried to scapegoat him for their screw-up with failed $10m felony case.

Oh I agree completely. That's not even including what they did in Libya. But it is worth mentioning that there are people who are far more responsible for these Wahhabi Jihadist-fueled bloodbaths in the middle east which will be the foreign policy "legacy" of Obama's presidency.