This Joint Analysis Report (JAR) is the result of analytic efforts between the Department of Homeland Security (DHS) and the Federal Bureau of Investigation (FBI). This document provides technical details regarding the tools and infrastructure used by the Russian civilian and military intelligence Services (RIS) to compromise and exploit networks and endpoints associated with the U.S. election, as well as a range of U.S. Government, political, and private sector entities. The U.S. Government is referring to this malicious cyber activity by RIS as GRIZZLY STEPPE.
Previous JARs have not attributed malicious cyber activity to specific countries or threat actors. However, public attribution of these activities to RIS is supported by technical indicators from the U.S. Intelligence Community, DHS, FBI, the private sector, and other entities. This determination expands upon the Joint Statement released October 7, 2016, from the Department of Homeland Security and the Director of National Intelligence on Election Security.
This activity by RIS is part of an ongoing campaign of cyber-enabled operations directed at the U.S. government and its citizens. These cyber operations have included spearphishing campaigns targeting government organizations, critical infrastructure entities, think tanks, universities, political organizations, and corporations leading to the theft of information. In foreign countries, RIS actors conducted damaging and/or disruptive cyber-attacks, including attacks on critical infrastructure networks. In some cases, RIS actors masqueraded as third parties, hiding behind false online personas designed to cause the victim to misattribute the source of the attack. This JAR provides technical indicators related to many of these operations, recommended mitigations, suggested actions to take in response to the indicators provided, and information on how to report such incidents to the U.S. Government.
The U.S. Government confirms that two different RIS actors participated in the intrusion into a U.S. political party. The first actor group, known as Advanced Persistent Threat (APT) 29, entered into the party’s systems in summer 2015, while the second, known as APT28, entered in spring 2016.


Read more at link above 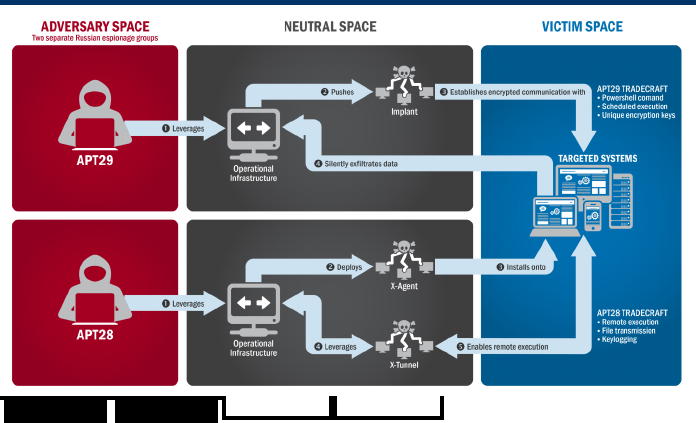 Enlarged Picture
Now, can anyone find in this report from the Department of Homeland Security any proof that Russia was involved?
Maybe I am missing something but to me it looks like APT 28 & APT 29 had a jolly ol’ time with emails.


These actors set up operational infrastructure to obfuscate their source infrastructure, host domains and malware for targeting organizations, establish command and control nodes, and harvest credentials and other valuable information from their targets. In summer 2015, an APT29 spearphishing campaign directed emails containing a malicious link to over 1,000 recipients, including multiple U.S. Government victims. APT29 used legitimate domains, to include domains associated with U.S. organizations and educational institutions, to host malware and send spearphishing emails. In the course of that campaign, APT29 successfully compromised a U.S. political party. At least one targeted individual activated links to malware hosted on operational infrastructure of opened attachments containing malware. APT29 delivered malware to the political party’s systems, established persistence, escalated privileges, enumerated active directory accounts, and exfiltrated email from several accounts through encrypted connections back through operational infrastructure.


But nowhere can I find anything about Russia. I did see where the DHS chief stated that there was no hacking of the election votes.


Speaking with the Washington Post’s David Ignatius, Jeh Johnson explained DHS’s cyber team was ready on election night and they didn’t see "anything that affected the ballot count,” he said.
We see no evidence that hacking by any actor altered the ballot count for any cyber actions that deprived people of voting,” he replied.

Townhall.com
I also have a problem with Obama places sanctions before he has even been given a report or the findings. Once the sanctions are in place don’t they kinda have to make the reports at least try to match?


John McAfee pretty much destroyed the BS narrative being pushed in Congress.

I think war with Russia was planned in advance, and the only thing that they were waiting was for Hillary Clinton to win the elections by a landslide. Now, that she had lost in a landslide, Obama is following orders, and working his hardest than he ever was to make relations with Russia so much worse, in order to maybe provoke a response from them, which would then make impossible for Donald Trump to work on normalizing relations with them, because he would be under lots of pressure.

I mean, think about it. Trump has said that he wants to cooperate with Russia before the elections. But now that he had won, and considering this strong false narrative that Russia helped him win the office, I think those in shadows are preparing a dangerous rhetoric in which any normal, not conflicting thing he does with Russia, will just lead to people being angry and yelling and upset that he's working for Putin and Russia. Do you guys understand why is this rhetoric very dangerous?

Something extremely dangerous is going on, I'm sure of it

I'm thinking the same thing.
It doesn't matter if its true, the TV's going to push a narrative that Trump is running the country on orders or persuasion from Russia.

A decade or so of work, illegal activities has been in the works to get this war and they wont let Trumps election stop it.

I think war with Russia was planned in advance

BS! The US/NATO didn't invade Ukraine to aggravate Russia! Russia made he decision to use its military might to defend the Assad regime, against US forces.

Putin was the one fear mongering and threatening war if Hillary won the election.

Something extremely dangerous is going on, I'm sure of it

Yep! Putin's disdain for the US and now his puppet is strategically placed in the Oval Office.....until his impeachment.


Something extremely dangerous is going on, I'm sure of it


This pretty much sums up my thinking on this as well. And they are doing everything that they can to trigger things before Trump takes office.

a reply to: Agit8dChop
I also agree with you that the hands behind the scenes will use Russia to try and make Trump look dirty. They are already lining up their chess pieces.

Let's be honest though, Trump probably has some illegal dealings with Russian Oligarchs.

This isn't a 100% clean deal we are talking about here. I don't believe Russia was the state sponsor who did all this, they were blamed for that's for sure.

But they aren't an innocent party, counter intelligence is most certainly a thing, and cyber warfare is increasingly becoming THE thing to do in espionage.

I believe that Trump has some questionable ties, to questionable people. Exposing those relationships is good for America, not bad.

originally posted by: windword
a reply to: Nikola014

I think war with Russia was planned in advance

Russia made he decision to use its military might to defend the Assad regime, against US forces.

What kind of nonsense is this? Bashar Al-Assad is the legitimate, internationally recognised President of Syria. Syria is a Russian ally. They had every right to intervene, not least because they were asked to.

US Forces? You mean the Al-Qaeda terrorists?

This literally makes no sense.
edit on -060006am1kam by Ohanka because: (no reason given)

Why do you feel the need to discuss something you know absolutely nothing about?

There are no US forces in Syria. Russia, Syria and Iran are fighting Al Nusra and ISIS who are being supported by the US led alliance. Do you understand that?

Putin was the one fear mongering and threatening war if Hillary won the election.


What's the point of making things up on ATS? You just make things up as you go, it's a narrative you've seen from CNN, and sorry to tell you, but you will be ridiculed here for doing things like that

Stop lying, and get your facts straight

posted on Jan, 6 2017 @ 06:55 AM
link
It looks that the powers that be hold us with such utter contempt and consider the general population so stupid that they couldn't even be bothered to construct a decent lie anymore problem is there are at least 52 million reasons for them to think like that.

You mean Hillary threatened war with Russia if she won?

But keep telling your blatant lies, maybe one day you'll even believe them.

Are you an American? This isn't a "party" issue, this is an American issue!

The US position, simply put, has been to assist NATO alliances to disarm Assad of his chemical weapons that he was using against his own population. I can understand disagreeing with US military activity, but I don't understand siding with Assad, a mass murderer of his own people.

Yes that was the US position unfortunately it was bs

You mean Hillary threatened war with Russia if she won?

But keep telling your blatant lies, maybe one day you'll even believe them

Hillary Clinton never threatened war with Russia. For the past 8 years Congress has been petitioning Obama to be tougher on Russia. She acquiesced to the demand during her campaign, using it to bolster Congressional support.

President Tayyip Erdoğan to ask Donald Trump to impose no-fly zone over Syria
edit on 6-1-2017 by windword because: (no reason given)

Plenty of lies coming out Russia and its shill.


As for the OP.
The president-elect will be shown the evidence today and we will get a declassified version next week.

The US has been hacked repeatedly in the past few years.

We've never made hostile moves to a foreign country then, but wait until 2 weeks before transferring power and everyone and their mother wants to attack Russia.

We are supposed to be at war with Russia, lord knows why, but that's what "they"' want.