One on the CNN...2010 Trump on Jullian Assange and Wikileaks:

Trump in 2010: WikiLeaks 'disgraceful,' there 'should be like death penalty or something'
www.cnn.com...


(CNN) — Donald Trump called WikiLeaks "disgraceful" and suggested there be a "death penalty" for their actions during a 2010 interview.

AND another bit that hasn't been reported...nor wiped from his twitter yet...I found it searching twitter for something else..

In case you thought this was a one off quip...from twitter...Trump FOR YEARS calling for Snowden to be executed.. 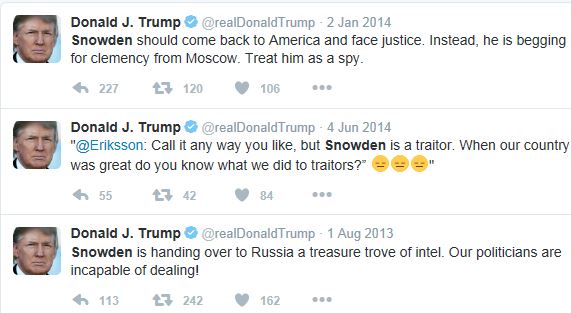 There actually many more tweets along the same lines from Trump about Snowden, this is just an excerpt.

It is interesting in two ways...

How a President Trump views leakers...and how they might be treated under Trump...

And how he views leaks favorable to him verse the opposite...

Sort of makes Trump into a big fat hypocrite if you ask me.

It's ok when Assange does it and it help get him elected but not when Snowden does it.

Face it. Trump doesn't have any true stance on anything because he doesn't think about anything long enough to really understand any of it. He wants people to agree with him and he wants to seem like he's smart and in the know so he'll side with whatever is convenient and gives that perception. We're so f*cked.....

originally posted by: burdman30ott6
a reply to: Indigo5

Do you agree with our new President that Edward Snowden is a "traitor, disgrace, liar, fraud, piece of human garbage" etc. that should be executed?

Do you his strong views on leaks and whistle-blowers (not advantageous to his own ambitions) will be reflected in his Administration in the coming years?

Frankly I am unsure how you missed those inherent questions?
edit on 4-1-2017 by Indigo5 because: (no reason given)

And Trump advocated the death penalty for both...
Affording you the unsure definition of Snowden as Hacker vs. Leaker vs. Whistleblower

Snowden was a soldier for the military not a hacker.

My point being that they both are releasing classified information but only one of them is seen as wrong by Trump. The one he has no problem with also happens to be the one who's Trump gain more power. Funny how that works huh??

originally posted by: mOjOm
a reply to: Indigo5
It's ok when Assange does it and it help get him elected but not when Snowden does it.

X and Y "leaked" to Assange.

Snowden was a soldier for the military not a hacker.

My point being that they both are releasing classified information but only one of them is seen as wrong by Trump.


Now...The first link in the OP is Trump in 2010 saying there should be the Death Penalty for Assange as well....

Well, I look at it this way... we just experienced 8 years of self-proclaimed "most transparent administration in history" which was also self-proclaimed "champion of whistleblowers everywhere" that, in all reality, was the least transparent admin ever and was completely hostile towards whistleblowers. I do not recall any threads by Indigo5 complaining about that... so I see little more than convenient partisan sniping under the umbrella of complaining about convenient partisan-based enforcements (or rather the boogeyman specter of potential partisan-based enforcements).

In other words, I'm unsure how your OP is anything other than sour grapes.

So what??? I don't care if they leaked to their grandmother they were still leaking classified information and Trump is still a hypocrite.

Assange is a great Journalist but he basically reports on what whistleblowers release and Snowden is a whistleblower.

Since when is truth ever a bad thing. Snowden let us all know what the KGB...I mean NSA is doing to us and Assange relayed that truth. Both are hero's we need in this day and age.

Is he still calling for Assange to be killed??? Nope. Imagine that.

but are those tweets by him or just from his account


something just does not jibe... I mean the Hillary scandals from Benghazi-to-private server & lost emails... which he once vowed to prosecute her for...but now retracts that stand

(the list of Hillary NO-NOs is almost as long as the Budget Items paid out year-after-year) ...

CONGRESS TO REVIEW/CUT THESE BUDGET ITEMS:

posted on Jan, 4 2017 @ 03:53 PM
link
Donald Trump was a private citizen. He can say whatever the # he wanted to say and there were no consequences of that.

originally posted by: burdman30ott6
a reply to: Indigo5

Perhaps you look at it as a partisan that attempted to dismiss the Op with fake confusion in the first post?

Nope...Pres. Obama isn't your excuse anymore...Your complaints are over...If they were sincere, you might have something to contribute here where the topic is the Trump administration and his tirades calling for the execution of Assange and Edward Snowden.


In other words, I'm unsure how your OP is anything other than sour grapes.

My OP is Trump's words...Maybe you have comment on them?

Face it, the man doesn't have a principled stance on anything. He just says whatever sounds good at the time. Doesn't that concern you at all???

Sometimes you might change your mind on some things, I get that too. But not having any principles or flip flopping back and forth on issues is someone who lives in hypocrisy and double standards and not a good leader.

So what??? I don't care if they leaked to their grandmother they were still leaking classified information and Trump is still a hypocrite.

Using your reasoning, the Guardian should face the same consequences as Assange and Snowden, correct?

What classified information was leaked that you think helped Trump gain more power?

Don't think anyone is disputing that fact.

Trump had the belief and most likely still does believe that Snowden is a traitor who needs to be executed. And yet when it was first announced during the elections that Russia may have been involved in hacking and providing information on Clinton his response wasn't to condemn the actions. Instead he encouraged them to release more if they had it.


Sort of makes Trump into a big fat hypocrite if you ask me.

How the hell is that ?