2016: The year that UK propaganda demagogued the US election.

posted on Jan, 4 2017 @ 11:04 AM
link
All this hysteria over alleged Russia "influence" since the election results, it's hard to keep it straight whether it was "hacking" or "rigging" or "influence", or what exactly this "influence" they're talking about is supposed to mean on account all of this rhetoric is kept deliberately vague. Was the hacking just the email servers, was it the actual election results itself? This "influence", was it genuine "fake news" (i.e. hoaxes), was it propaganda; was the propaganda true or not? To the DNC & MSM here in the US (and in the UK press too ironically enough), all of that stuff is on the table, it's all one in the same no matter what truth lies therein it cuts every which way, and none of it is to be tolerated in the slightest.

I don't know about anybody else, but the bulk of my election news aggregation came from watching the new threads stream here in ATS, and from the news stream at Google News. Once I finally started tuning in to the while affair in late Spring last year, I'll tell ya, I couldn't do a quick scan of Google News without seeing articles from the two main UK press sites: The Time, and The Guardian. Here in ATS I got to see the the full spectrum of 'relevant' Trump news from the best the Trump supporters were posting to the worst Hillary people were posting. And when I'd see stuff from The Times and The Guardian the pieces generally were of the worst kind of hit pieces.

In terms of US media coverage there are some pretty good studies out now showing the undeniable pro-Hillary echo chamber slant from the MSM (that even includes Fox News amongst the favoring Clinton camp). The following charts tell the media bias tale quite clearly: 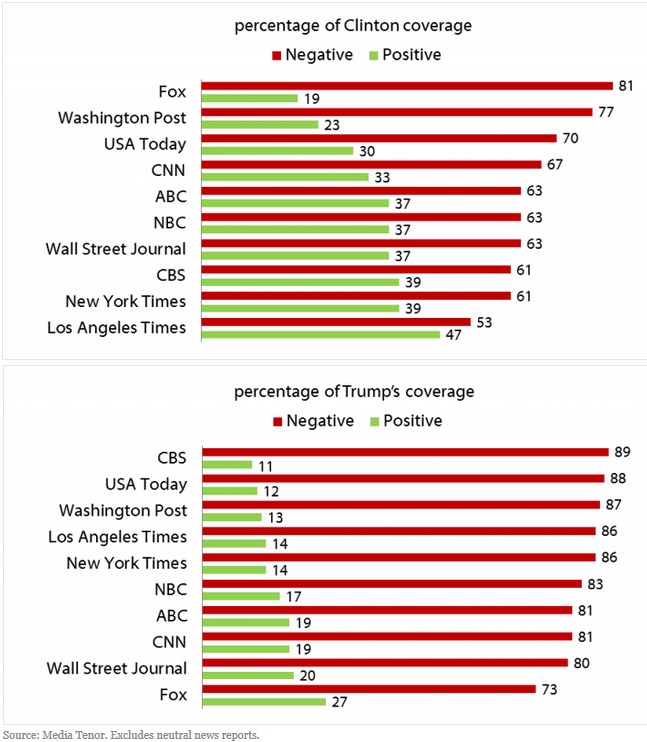 Which basically means there was round the clock Trump hitpieces being pumped out by the Establishment Propaganda Fronts, the same people going to lecture everyone about "influencing" elections.

There's also my "Exclusive MSM Analysis Reveals: They Have Gone FULL TABLOID (Trump Tapes vs. WikiLeaks Reveals All)" piece I did one week following when the "Trump Tape" was released, which conveniently dropped about an hour after the WikiLeaks Podesta archive first hit the web. Where there was just the one Trump tape, and a handful of followup allegations for the MSM to run stories off of, in the case of the Podesta files there was easily dozens of stories they could have run with. It was the ultimate in election closeout controversy gold, yet the MSM entirely dropped the ball. What these two coinciding events gave us was surely the most choice insight into just how crookedly biased the MSM here is. The MSM should have been out of their minds trying to contain themselves in the face of the WikiLeaks (which even post-election to this day they haven't been), but instead they swooned like teenage girls chasing The Beatles over a single "lockeroom talk" tape and some dubiously timed other "sexual assault" (kissing & groping) allegations regarding a de facto rock star & groupies (as if that's somehow even surprising). 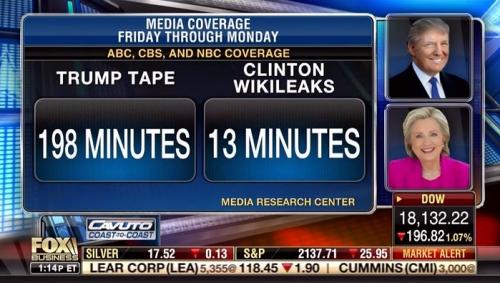 This followed an entire year of the MSM malreporting the controversies: 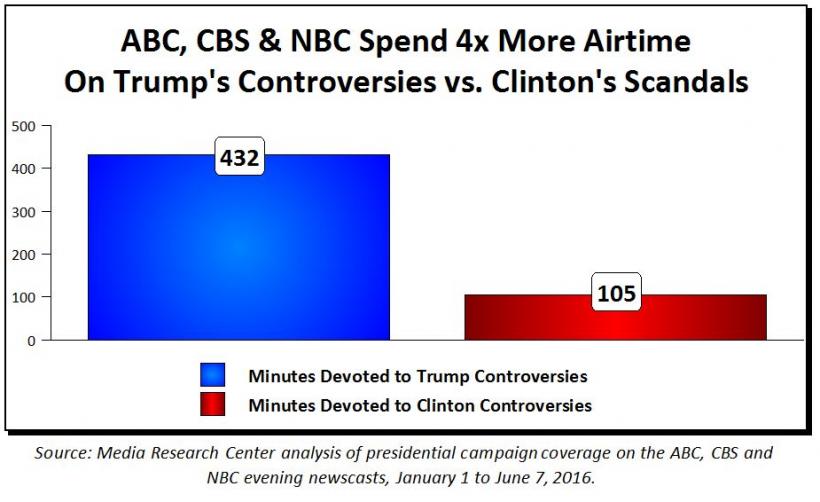 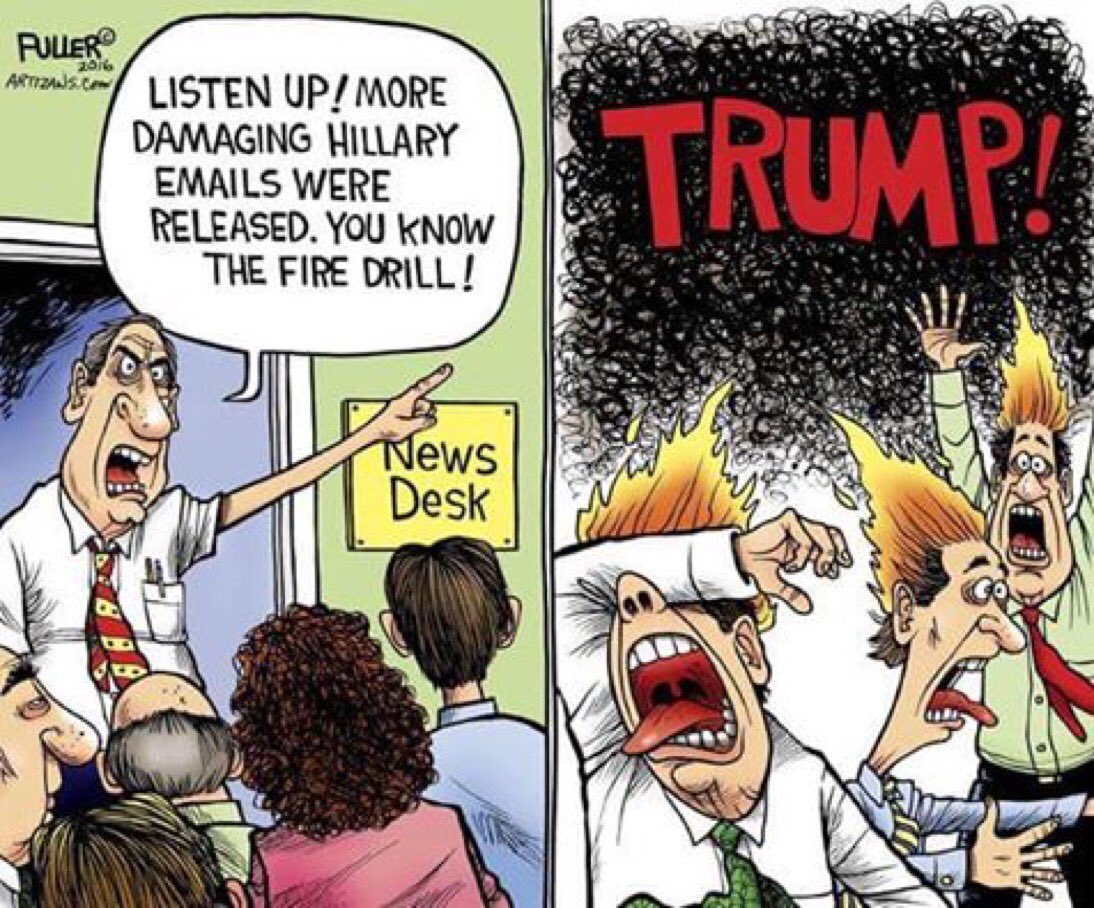 Now while I didn't find a clean study as above covering UK press, below I've pulled some story examples from Google News, and also applied the same search methodology that I used in my above 'tapes vs. leaks' analysis piece. In terms of the 'tapes vs. leaks', it was about par for the MSM course with The Times. With The Guardian, the sample is hard to gauge was some crazy results numbers come up as you'll see. I seriously don't even know how they posted that many pieces covering the elections here, but regardless of the contents of all of the pieces they did run, their news was certainly a factor in US news results thanks to Google (whom is at the forefront of this whole "fake news" auto-censorship push), which i find pretty incredible as foreign "news" is clearly forbidden now given all of the rhetoric the past couple months now.

Now as you're about to see, the "news" being put out by UK media is clearly infected with propaganda. In case you're at all fuzzy on what "propaganda" is, it's simply communications meant to sway opinion (i.e. a political yard sign, a Nabisco TV commercial, a Gucci print ad in a magazine, a documentary by a former president meant to scare the bejesus out of you over global warming, etc). Just look at this handful of header images I pulled from some of the hitpieces from The Times, and then come tell the world that isn't propaganda: 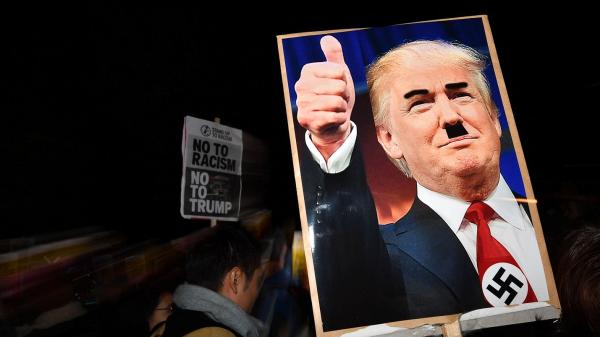 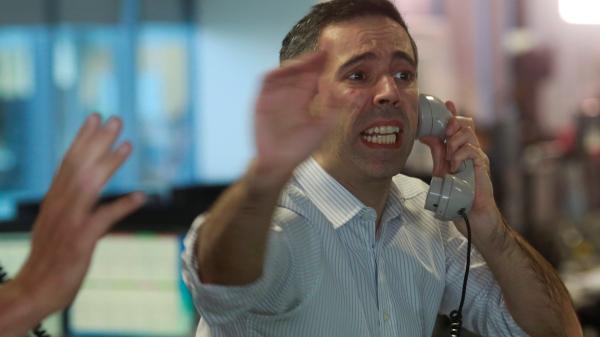 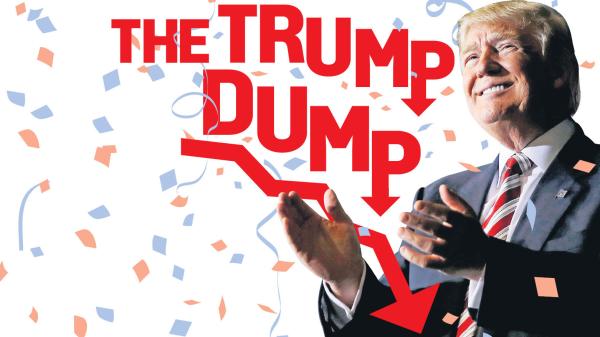 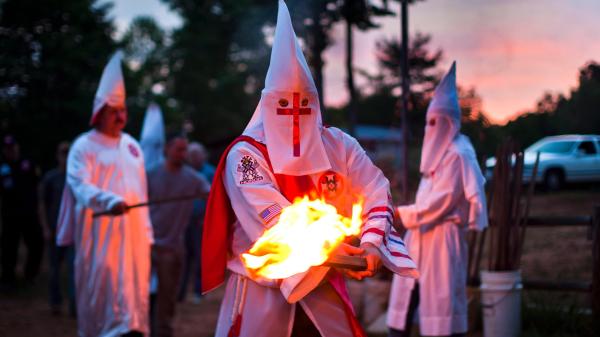 Somebody please correct me if I'm wrong, but I thought we United Statesians rebelled against the British Monarchy in 1776 (not to mention saved their arses in WW2)!?! So then WTF were they doing meddling in our election like all of this? 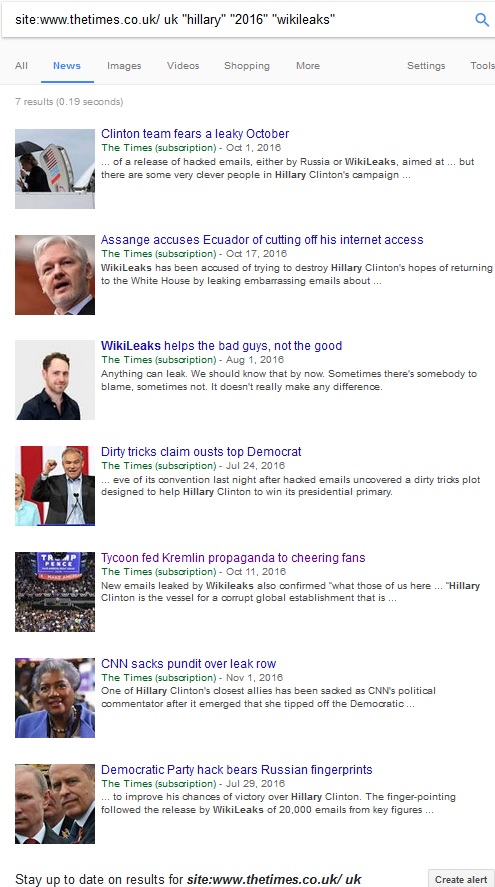 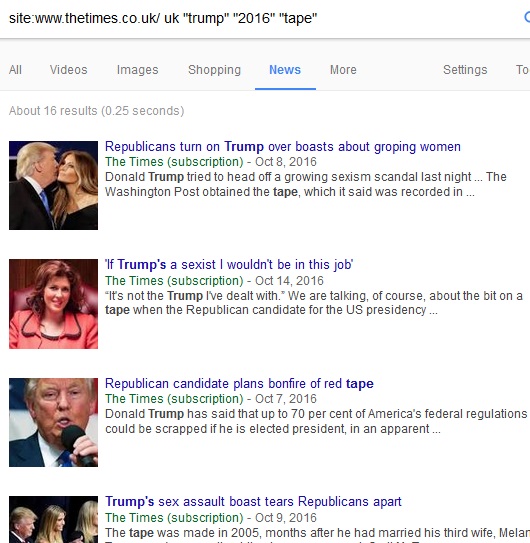 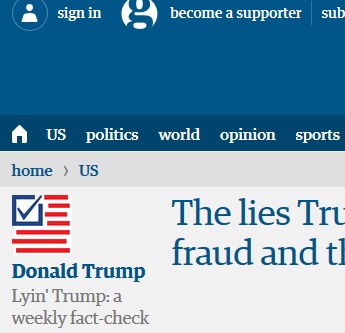 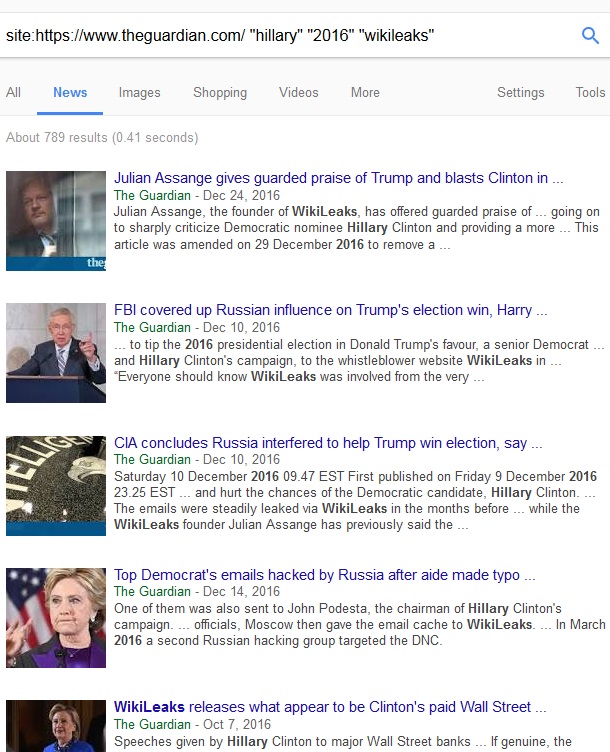 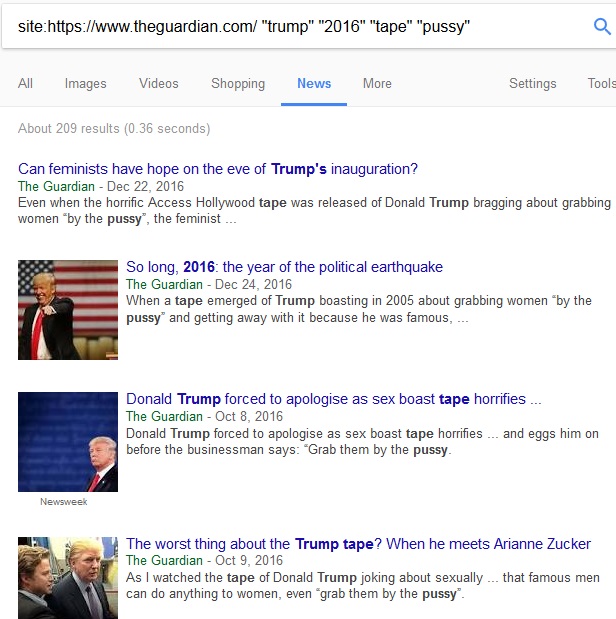 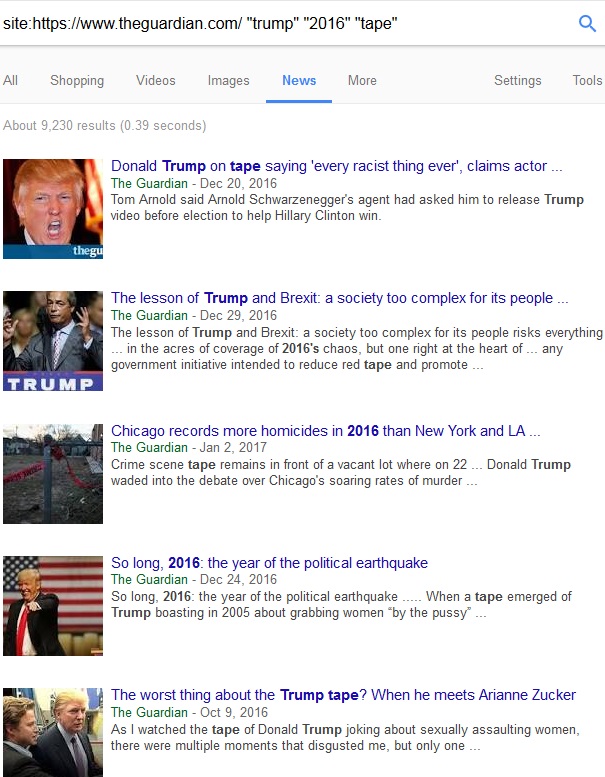 It's interesting how you are complaining about Trump's overexposure in the media when all that free attention is one of the bigger things that helped get him elected. Talk about looking a gift horse in the mouth...

Can we put sanctions on the DNC for meddling in the election? There is actually proof of that (bernie)

Well OK here you have someone who attacks people as being of the Liberal elite - what does that mean anyway? Who has consistently spoken of women, minorities, and his closest competitors in most ungentlemanly terms and frankly discriminatory terms. Who is the doyen of the extreme right (not the right of centre) who seeks to take America into the dark ages. Who is a buddy of an enemy of the UK (Putin) and the US fighting men and women who took part in anti communist wars. I could go on but you need to go back and look at Trump's tweets and speeches. Trump know takes nepotism to levels last seen in the Italian house of Borgia!


Who would speak kindly of such an elderly idiot?? Oops my bad - you do!

So an endless barrage of hitpieces slanted against one side and reported on to a greater extent equals ideal public relations in your reality?
edit on 4-1-2017 by IgnoranceIsntBlisss because: (no reason given)

Oh, great, the Hillary unlogic of "Trump called Rosie a fat pig so that means he actually called all women fat pigs". That kind of crap didn't work for Hillary, but you're still going to push on with it?

The results were a discrepancy with the popular vote (which would have been a TOTAL BLOWOUT if the media coverage had been actually fair & balanced, and the UK media wasn't involved in ramping up the hitpiece propagation. And now we've had liberals rioting and bracing to occupy the white house to perpetuate a endless drama scene for eh MSM to report on (all stated to last until Trump is impeached). Oh, and the cream of the crying involves this fake news insanity push which involves the establishment of a Ministry of Propaganda / Truth / whatever its called, all because Russia did maybe a fraction of the propaganda that the UK press commuted.
edit on 4-1-2017 by IgnoranceIsntBlisss because: (no reason given)

posted on Jan, 4 2017 @ 11:27 AM
link
It's exactly why I always say he beat the world, or at least the western world.
EPIC.
Clinton's loss was possibly the biggest meltdown ever. It was supposed to be a landslide, the other way.

As far as the UK it seems most of their agendas are the same as ours. At least at the top.
I listen to BBC radio in NY sometimes and their slant is identical to the liberal left in the states.

posted on Jan, 4 2017 @ 11:28 AM
link
you can`t argue with the facts and the facts clearly prove the MSM attempted to influence the election.That is why the MSM has been harping so loudly on the unsubstantiated claims that the Russians did something, they are trying to divert attention away from their own failed attempt to rig/influence the election.
edit on 4-1-2017 by Tardacus because: (no reason given)

posted on Jan, 4 2017 @ 11:28 AM
link
Bloody heck Ignorance, if you stretch it any further it will vanish. Would like you to tell me just how many Americans actually read the Times or the Guardian? What you quote is certainly NOT rigging. Propaganda yes, but your own newspapers carried more vociferous pieces than any put out by any British paper.
Even your own newspapers are partisan, some for one party, some for the other party and if you couldn't differentiate between the BS and the supposed truth then I really feel sorry for you.
So a message for all you Americans " you've had your vote, you've got your man, for good or bad, now STFU and move on and stop whining like lost puppies".


So, I take it, something about the UK is annoying you?

posted on Jan, 4 2017 @ 11:29 AM
link
a reply to: IgnoranceIsntBlisss
Yeah the popular vote discrepancy has NOTHING to do with Trump's bad behavior, alienating behavior towards liberals, and the fact that there are more Democrats than Republicans in the country. It's TOTALLY all about all the mean things the press said about him. /sarc

Again. He WON! You aren't doing anything to make me sympathetic to your complaints here. Just looking like a sore winner because Trump didn't win as thoroughly as you'd have liked. "WAAAAH The press is mean to my messiah and I'm going to complain despite the fact that that very coverage led to him being elected!"
edit on 4-1-2017 by Krazysh0t because: (no reason given)

Why call any woman a fat pig??? that was not the only woman. Why not argue without ad Hominems. Did you know that Trump has his finger on the Nuclear Button. Do you honestly think that is a happy situation? We know why he would never nuke Russia but there ya go. Please read the rest of my post!

Then how come every single time on a daily basis I'd open google news and see these UK outlets in the front page of results?

Now if RT doing some coverage in their little corner, and some FAKE news sites that so far I've seen were banner ad mining and weren't even connected to the Russian government, that a on the brink of war RESPONSE is warranted, yet when we see the UK press and Google News (Google being practically part or Obama's cabinet by the way), that's to be tolerated?

posted on Jan, 4 2017 @ 11:35 AM
link
a reply to: IgnoranceIsntBlisss
Do you not think that the internet sites are partisan as well??

Dude, are you seriously going to act like Hillary's list of ethical & character flaws and corruptive etc etc don't even the scales with Trump's character flaws and dubious behaviors? Please don't tell me you have total amnesia from the past 12 months.

Did you read the hitpiece coverage by the media charts at the top there? Now add the UK press to the hitpiece brigades. NO WONDER people were running around this site everyday screaming that Trump is Hitler etc etc.

And, everyone, don't even act like UK articles such as I'm highlighting weren't a routine source to start wedge threads all during the election.