posted on Jan, 1 2017 @ 10:43 PM
link
This is really an odd story Rachel Dolesal who resigned the NAACP following allegations she lied about her "racial identity" (not black) and that she had been a victim of hate crimes.
So her being fired for not being black omits her from the "diversity summit" becasue she can't discuss racial issues in the country. What she was fired for lying about being black to get a job. How does this work?

This 2 min video explains why she resigned from NAACP.


Now she was disinvited after community backlash. Remember she was a "white women" posing as a "black women" for the NAACP, a civil rights outfit.


Rachel Dolezal, a former NAACP leader and professor who received national media attention after it was revealed that she was a white woman posing as African-American, has been disinvited from a speaking event at a Martin Luther King Jr. festival in North Carolina after a community backlash about her scheduled appearance.

2 weeks ago the decision was made to remove her from the diversity summit. The reason was she would take away from the goals of the summit. Basically the lie she told makes it impossible to have an honest discussion about racial issues in the country. You can't write this stuff.


“They made the decision about two weeks ago to remove her from the diversity summit, which we support,” McRainey said. “We had two focus group meetings with citizens and pastors, and I think the feeling was that her presence would take away from the goals of the Dreamfest.”

WUNK22
+23 more
posted on Jan, 1 2017 @ 10:58 PM
link
This women is the poster child of the liberal left. Facts mean nothing, it's all about feelings. Feel like a girl, even though you have an 8inch penis, bam your a girl. Liberalism truly is a mental disorder.

Good. I can't stand people who can look you straight in the eye and lie.

She gets -50 oppression points.

I find it funny that she can't work at the NAACP because she lied about being white to get a job, she wasn't black.
She is omitted from a diversity summit, and she was essentially fired because she was the wrong color.
Oh a main issue at the diversity summit is solving racism????
edit on 1-1-2017 by seasonal because: (no reason given)

posted on Jan, 1 2017 @ 11:09 PM
link
Well, the lying on the application thing can get you fired pretty easy . . . but you would think that the NAACP of all groups would not include such a racist question on its application. As for her not being invited to the summit? Well, that is just a great example of Liberal Hypocrisy. If you are a man and want to be a woman (or vice versa) then by all means, that is what you must be. But if you are white and believe you are truly black, then you are an evil racist.

This is a carnival of racism, hippocracy, get evenizm, and institutional prejudices. I am surprised that there wasn't a law suit for her being fired.

posted on Jan, 1 2017 @ 11:22 PM
link
If you can be born the wrong gender how can you not be born the wrong race.
Isn't the leader of BLM also a white guy who does styles himself as black and claims his mom cheated on his dad.

posted on Jan, 1 2017 @ 11:27 PM
link
I actually think they did the right thing.
This woman is a disgrace and if I was running an organisation or event I wouldnt want her involved.

posted on Jan, 1 2017 @ 11:33 PM
link
I'm am absolutely convinced she is trolling people to this day. I do not legitimately believe that someone can claim with a straight face to be a different skin colour than what their own eyes show them. Your beliefs are at odds with facts.

posted on Jan, 1 2017 @ 11:35 PM
link
The true irony in all this is that the founders and first President of the NAACP were white jewish socialists.

To those in the "know" this shouldn't be surprising.

AAC
edit on 1-1-2017 by AnAbsoluteCreation because: (no reason given)

posted on Jan, 1 2017 @ 11:37 PM
link
How about we start slapping psychiatric disorders on these people as this is clearly what is happening?

The fact that we are even entertaining these lunatics and not throwing them into mental asylums is a great tragedy and a sad indictment of our modern society and our reality detached solipsistic culture..

The progressive left has totally left reality, when are the general populace gonna acknowledge this increasingly obvious fact? But instead of their severe delusions being instantly recognised and discredited the lunatics are running the asylum and these people really believe in this postmodern religion. This is great evidence - that despite us having entered the modern age technologically and us thinking of ourselves as modern and enlightened - humanity are still collectively acting like children wallowing in comfortable and convenient fantasies fed to them by a ruthless and opportunistic elite class. To have a whole civilisation embrace such a fantastic ideology and set of lies in the modern World is quite spectacular when you think about it..

People think of themselves as enlightened but they are still like children and they still invent religions for comfort and convenience. In fact they have been so hypnotized that they have been completely immunized to the real truth, and if they ever heard it they would violently deny it.. They are wholly incapable of facing uncomfortable truths and sometimes they even consciously embrace lies knowingly for fear of what may underlie their precious lies.

Don't wanna question, don't wanna rock the boat, don't want to upset the comfortable status quo but most importantly, don't want to sacrifice anything by challenging injustice, instead preferring to deny its very existence or championing some establishment sponsored faux cause instead. Something easy that everyone is already on board with, something that won't cost the person anything but quite contrary will get them praise, essentially what has come to be known as virtue signalling. But how virtuous is it really? Or rather how selfish it is? And how narcissistic? These people are kicking in open doors all the while acting like they're virtuous heroes and even quite openly calling themselves that. This is the most despicable group of people that I know because not only are they so utterly fake, but never in my life have I encountered such rank hypocrisy in a group before. Because while they claim to champion tolerance they have in fact come to embody the very opposite. And the most amazing thing is that they don't even recognise this giant clusterf*ck of cognitive dissonance that could probably be seen from space. Narcissism has gone mainstream and become a cultural norm with the millennial generation. Truly they are lost.. we would be better off sending them to gulags than trying to rehabilitate them. They are a lost cause and will probably spell the end of our civilisation.

Oh how I hate the narcissistic lunatic left..

posted on Jan, 1 2017 @ 11:40 PM
link
I can't believe she doesn't have the common sense to just go away.
I guess national ridicule once is not enough.

posted on Jan, 1 2017 @ 11:45 PM
link
Hold up... Trans-racial?
I almost went right by it without thinking about it.
People are losing their damn minds.
She should be ashamed of herself.
If she is a she.
Who knows what the hell she might be or claim to be at this point.

posted on Jan, 1 2017 @ 11:49 PM
link
One could see this woman as an inspired satirist, undermining the entire basis of racial identity poiltics.
In the absence of any legal or even clear definition of the boundaries between races, how can identity claims be shown to be false?
What would happen if the whole country followed her example and declared themselves to be black?

posted on Jan, 1 2017 @ 11:54 PM
link
a reply to: c2oden
I was speaking tongue-in-cheek. Call me the satirist, if you like. However, "many a true word was spoken in jest". Think about the whole country being eligable for minority quotas, and immune to legal charges of racism.

originally posted by: seasonal
a reply to: IkNOwSTuff

Most likely not, im not sure though.
I personally dont have an issue with black/hispanic/asian only clubs or groups, what I have an issue with is the hypocrisy of these groups being acceptable but white only groups being considered racist.
Its all ok or its all racist and unacceptable, there shouldnt be any compromise or special treatment in my opinion.

“I acknowledge that I was biologically born white to white parents, but I identify as black”


Either she's a troll of epic proportions or a total moron. 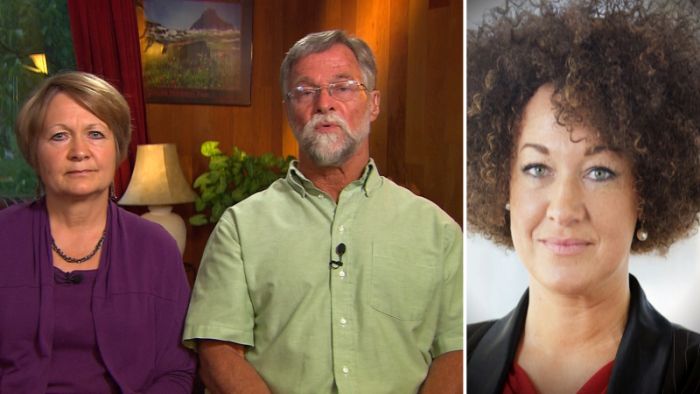 posted on Jan, 2 2017 @ 12:02 AM
link
What is with this psycho woman? I mean how far has it gone when white people that are CLEARLY WHITE wants to be black so bad that they actually start pretending that they are.. and even want to be acknowledged as such, clearly denying objectors and reality right in its face.

Clearly a symptom of the psychosis that has been induced into the racial consciousness of the white race. How many white people are utterly ashamed of being white? How many of them want to be "ethnic"?

The collective psyche of the white man has become schizophrenic and insane.. it went from high testosterone supremacy to self-denial and feminine submission within a 100 years. Both of these states being imbalanced and disorderly reflections of masculine and feminine principles. (I hate that I have to say this but I fear someone will attack me and call me sexist otherwise: I'm not saying that the natural state of the feminine is submission or even that they're intrinsically linked, but that if the feminine is not in a healthy state this can be a consequence.)