Around like 6:52, Trump says about Hillary that - "This is the first time ever that she is sitting down with major corporate leaders and not getting paid for it." .. and then everybody laughs.

I mean, is that funny? That's supposed to be funny? The whole room thinks so.

This is at the heart of government corruption. It seems to be an accepted affair for everyone in the room.


And then there is the criminal pardon joke. They are turning very serious affairs into lighthearted jokes and laughing about it.

Did you hear the other comment.. "We've been friends (talking about Hillary) for a very long time." 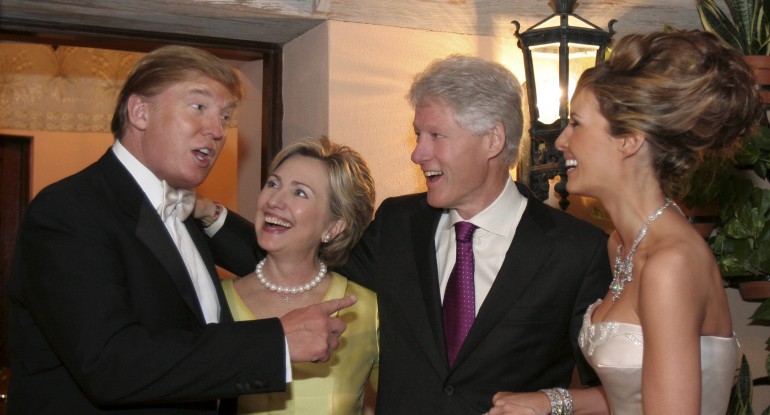 The TRUTH About the oligarchy hurts sometimes, No?

posted on Jan, 1 2017 @ 05:28 PM
link
Find Hillary's speech there, when she first took the podium she said something like:
'look at this room full of Plutocrat's hahahahaha!'.

The could identify the "Enemies of the People".

Hopefully they would deal with them effectively.

That picture was taken in 2005! It was Donalds wedding day, so no wonder they look as if they are getting on so well.

I wasn't picking, just thought they all looked so young in the picture so went for a nosey to see when it was taken. I understand what you are getting a in your OP.

posted on Jan, 1 2017 @ 06:02 PM
link
As a criminal/ex-con, I'm offended to be categorized with those things in the video. I demand they be put in prison and earn the convict title along with the criminal one. I'll wait. ...don't make me hold my breath.

posted on Jan, 1 2017 @ 06:03 PM
link
Ironic since Trump university was shut down due to being a fraudulent diploma mill, and he has to testify in the civil lawsuit from the Trump University fallout


She is Maria Bartiromo of Fox Business News.

But its so surreal because here he is talking about Wikileaks and how corrupt she is, yet the tone is not serious at all. Its like its all a joke, him and her both knowing that nobody will be indicted for anything.

Just in case anyone doesn't think the 1% are all friends.

They all know what each other are doing at all times.
I also have friends that work in swanky bars in D.C.. After politicians leave the hill, they all go have drinks together. Right and Left, together.
It's all a show people.

There will be no charges for Killary.

And at 3:14 red capped cardinal/bishop. Too may harlots in that room.

posted on Jan, 1 2017 @ 06:27 PM
link
To be fair and good points however, it's not "like", it's they are. Won't be surprised on the flip flopping than can happen this year to appease that cabal.

They act like foes in front of television, only to have laughs later in the back room.

I guess I can't be sure.

I wonder if his remarks about Haiti referred to p gate?

oh grin a scene from movie Naked Gun I came to mind... - where Drebin adresses 'criminals' at the banquet, and suddenly half of visitors grab their gun... but can't find that scene back


ABOUT: Maria Bartiromo joined FOX Business Network (FBN) as Global Markets Editor in January 2014. She is the anchor of Mornings with Maria on FBN (6-9 AM/ET) and anchors Sunday Morning Futures, the most watched Sunday morning program on cable (10 AM/ET) on FOX News Channel (FNC). She formerly anchored Opening Bell with Maria Bartiromo on FBN.

posted on Jan, 2 2017 @ 03:27 AM
link
I would not say everyone was laughing at the Clinton not getting paid joke. There where a few boos on that one from the crowd.

The joke is a good point on the nature of political corruption. The culture that is being exposed with drain the swamp campaign is a big project. When draining a swamp the first thing is to cut of the water supply. For the case in Washington it is cash, the life blood of movement, order and its advancing civilisation. The ensuing chaos when money is messed with is presently evident in India with its inadequate policy and poor implementation.

For anyone trying to track all the cash flow, it is immensely challenging and risky. There have been systems attempted and compromised as more competitive motives and edges have taken hold. There is also a great diversity in trade, resources and ways to measure wealth amongst the planet.

No matter what system is in place, the strongest and weakest links are in its people. The banking system does reflect this with it history and current general policy of multiple checks and balances. Now with Trump getting into the drivers seat of a mega trillion dollar budget, he is very much stuck deep in the mud of this swamp, also near the heart of its source.

Not all things in a swamp are bad as it is a rich source of life with lots going on. But when it is stagnant, corrupted and reeks of death and destruction it is time for a good clean out as the cycles of life and death continue. The rise of the secret state is one toxic and smelly mess, founded on good intentions but has become a perverse aroma that has infected all through the mass though and community consensus of our media. When we cannot face reality for what it is together, we are all left victims of the deception.

Trump already indicated that the whole Hillary is a crook thing was just him sloganeering to the Fox zombies.