Left Hypocrisy on Serve / No Serve; Don't Tell Me 'Both Sides Do It'

originally posted by: DBCowboy
The Rockette's are racist bigots who hate.

They have nice legs though.

So they are sexy racist bigots who hate.

posted on Dec, 31 2016 @ 10:51 AM
link
The twisting, stretching, and contortions in this thread must be the yoga that Hillary always talks about.

originally posted by: Martin75
The twisting, stretching, and contortions in this thread must be the yoga that Hillary always talks about.

She only talks about it. Looking at her, she definitely does not actually do it.


originally posted by: DBCowboy
The Rockette's are racist bigots who hate.

They have nice legs though.

So they are sexy racist bigots who hate. 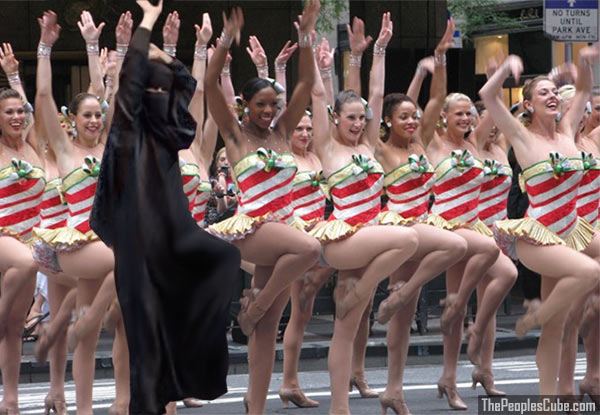 Looking at her, she definitely does not actually do it.

posted on Dec, 31 2016 @ 11:13 AM
link
The left purely conforms to a double standard which supports their own moral superiority. A bubbling vat of hypocrisy which is first chilled and then served cold like koolaid. The moral superiority is what caused them to believe they were going to win the election with such pompous flair and style. They march onward as pus filled boils of self pride and arrogance never knowing how visible and embarrassing their condition is. All anyone can really do is hope they eventually discover some humility.
edit on 31-12-2016 by NoCorruptionAllowed because: (no reason given)

It's that kind of thread.

It would have been good if you could have worked in some words like:

How hard is that?

I'm almost scared to ask, but what business are you in?

It would have been good if you could have worked in some words like:


Those words would have been good illustrations to describe the left for the rest of us, but we all know they can't see their own character flaws, which is why we are in this situation.

I never owned a bakery, if that's what you mean. I did manage a call center for a while. We answered everyone's calls, no matter their race, gender, religion or sexual orientation. The only time a rep was allowed to disconnect the call is if the caller became threatening. Seems like proper protocol to me.

either way, it's based on personal beliefs. are you saying one cannot act on religious beliefs, but may act on political beliefs? that sounds anti-first-amendment.
the larger point is--the left punishes people who act based on Christian values, but nobody on the right is calling for anyone to be punished for acting on their political values. =leftist hypocrisy.

The left doesn't have a problem with a baker or pizza maker turning away someone who comes in with obnoxious, unruly and disruptive behavior. That is a perfectly legitimate reason to refuse service to someone.

Ok... I think all gays are obnoxious and disruptive no matter what they do, so no service for them...fixed....

Isn't all this really a person's perspective? It is obvious that a large percentage of Americans do not think Trump is this way. Being gay or straight is a behavior just like what you are suggesting with Trump, so I guess you are suggesting that ANY behavior can be disagreed with as a legitimate reason.

(originally posted by Buster 2010 in reply to el goobero)


Well actually the left wanted the law to be followed. The right however was as usual throwing the Constitution under the bus because it doesn't allow people to be forced to follow some religious dogma.

Because the ignorant bakers cried it was their religion that stopped them from serving gays. The singer is smart enough to not say it's her religion keeping her from performing.


so one cannot deny service based on religious beliefs, but may withhold same for political beliefs? that does not sound First Amendment friendly.
the bigger issue here--the left made and enforced a law that targeted and punished Christians; no one on the right is advocating outlawing rockettes or other entertainers from refusing service for political reasons.
edit on 31-12-2016 by ElGoobero because: more quote issues
edit on 31-12-2016 by ElGoobero because: stil fixing quotes

originally posted by: kaylaluv
a reply to: Bone75

I never owned a bakery, if that's what you mean. I did manage a call center for a while. We answered everyone's calls, no matter their race, gender, religion or sexual orientation. The only time a rep was allowed to disconnect the call is if the caller became threatening. Seems like proper protocol to me.

Does that mean there have been call centers in the past who first demanded callers identify their race, gender, orientation, and religion first so they could be discriminated against? Sounds more like conforming to an ideology like an advanced form of political correctness which needs to "perceive" a persecuted state where it doesn't actually exist, but only makes an appearance of being in conformance to it for political reasons.

posted on Dec, 31 2016 @ 11:41 AM
link
There is a legal difference between the cases, rather than a double standard morally. That's the bottom line. Whether it should be this way is another story, but right now the law is what it is.

Overall though, I think the people refusing to perform are a joke. Pathetic human beings. I'd have respect for them if they were actually standing up for something tangible, but they are not. They are just brainwashed fools that believe Trump has done something really terrible, which he has not.

One is free to act on their religious beliefs until those actions take away the rights of others, for example you can't kill someone even if your religious belief is that you can. Everyone has the civil right to public accommodations, and turning someone away because of their race, gender, nationality or sexual orientation takes away that right.

What you CAN do regardless of religious belief or political belief is refuse to deal with someone you feel is personally or publicly threatening, disruptive, obnoxious, rude, etc.

I am fairly certain these entertainers have performed for others who don't have the same political ideologies as they do. That is not why they have refused to perform for Trump. It is not because he has claimed to be conservative. It is not because he is a Republican. It is because of the specific things he has said and promised to do when in office that will hurt innocent people.

LOL, it wasn't a specific policy. It just means there were no policies in place requiring reps NOT to service people according to their race, gender, religion or sexual orientation. It WAS a specific policy, however, to disconnect a caller that was being extremely obnoxious, rude, threatening, etc.