Two engines, mission creep, etc. It's a wonderful aircraft and one of the best 4th gens flying, but it was designed from the get-go to be a carrier-capable analogue to the Eurofighter Typhoon, itself a twin-engined Flanker killer.

Meanwhile, the original Mirage series were the Mazda Miatas of the fighter world. Small, elemental, versatile, and dirt cheap to procure and operate while being everything that a non-G8 nation needed in a fighter.

The Rafale is an incredible aircraft, but all its capabilities are overkill to any nation that doesn't already own F-15's, F-35's or the big Sukhoi's, which is why everyone who could afford it flies flankers, hornets, and eagles, while the countries who used to buy new Mirages now fly Gripens, F-16's, Russian fighters and whatever old western cold war aircraft that they can keep airworthy while they look for a replacement that they can actually afford.
edit on 7-1-2017 by Barnalby because: (no reason given)
edit on 7-1-2017 by Barnalby because: (no reason given)

Export is going to be huge on this. It will also give militaries that didn't purchase the F-35 another option, also leading to possible further sales of the F-35. I wouldn't be surprised if LM markets this as a junior F-35.

My prediction would be which ever variant has the best export prospect, will be the winner.

posted on Mar, 25 2017 @ 01:15 AM
link
One consideration in favor of Boeing is that - at present - Boeing has no new generation military jet aircraft in production: that is something that is not going to sit well with the Pentagon, who would prefer - strongly - that all major US aerospace firms have a current technology airframe being manufactured using the latest thinking, technologies & processes. Boeing will be using the TX as an experiment not just as about the planes design, but for the whole supply chain - new manufacturing techniques, relationships with supply chain partners, maintenance etc...

And the 6th generation "fighter" selection process is nearing....

Nobody does assembly line planes like Boeing. Of they get T-X it should be fun to see just how far down they can get the per-unit cost. It should also be a good ramp-up for when the descendants of McDonnell Douglas get to design their take on the F-15 replacement.

Well, Boeing is good - very, very good - with commercial aircraft. But so much of what has happened over the past few years in manufacturing tech - especially 3D printing and new ways of treating composites - has meant that the traditional assembly line is not the best way to build much of a plane. And a lot of military specific tech is even more radical. This doesn't mean that the current ways are bad ways, but that new technology allows for new thinking and ways of doing things...which means greater bottom line profits if you get it right. And that takes time to get right. It won't be risked with a 6th gen platform, but the T-X can likely afford to be a bit more experimental with the supply chain.

posted on Jun, 22 2017 @ 12:38 PM
link
News out of Paris regarding the T-X. Martin Baker unveiled their candidate ejection seat. The seat is designed for pilots between 103 and 245 pounds, features enhanced neck protection, passive arm restraints, and a rotatable rocket motor that can be used for pitch control during the ejection sequence. Sled testing will continue in the second half of the year, with an aim of certifying the seat next year. 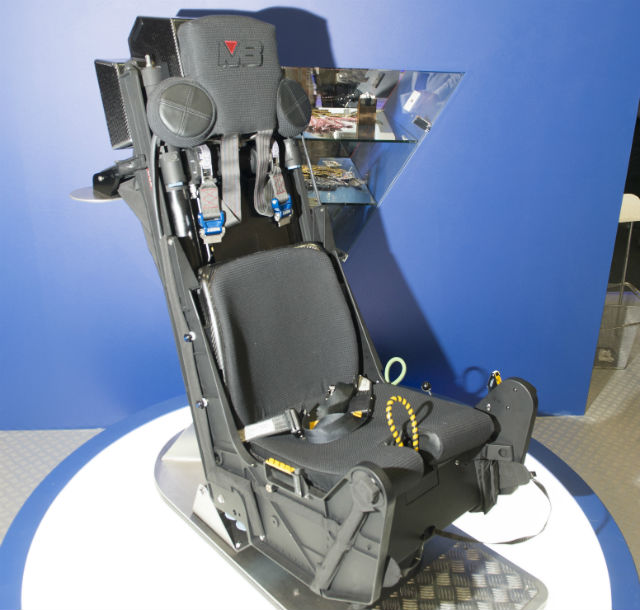 Leonardo has been touting the pedigree of the M346/T-100, including that the M346 is already training pilots to fly the F-35 in several nations. They expect the T-100 to come in under the $37M price tag of the M346. They have removed systems that the Air Force doesn't require, such as a refueling probe. They also said that losing Raytheon will ultimately help them, by reducing fees and issues caused by partnering with another company.

posted on Jun, 24 2017 @ 02:17 PM
link
Lockheed has stepped the marketing game up in a big way. Two T-50As arrived in Dayton for the Dayton Airshow. One is scheduled to fly, the other to sit static display.