How do you feel about Trump getting cozy with Russia and Putin.


originally posted by: JoeP2247
a reply to: UKTruth

Trump is a traitor.

I assume that was simply a childish rant but, if you have any proof that Trump is a "traitor" I would love to see it.

The DNC and its followers are the true traitors of the United States and are allies. Intent on turning the whole world into a Muslim hell hole. Destroying all education and culture to form a new world order.

posted on Jan, 1 2017 @ 06:28 PM
link
Putin is exponentially more intelligent than spoiled-billionaire Trump. He is going to take advantage of him every chance he gets. He will butter him up, and Trump will lap it up. I only hope his administration keeps him in check and avoids being utterly taken advantage of.
edit on 1-1-2017 by fleabit because: (no reason given)

It doesn't have to be adversarial. Although i might still be. But open and equitable trade makes for cozy partnerships. And tats better for the whole world.

A thousand times better then picking a fight with them by blaming them for everything under the sun like a bunch of grade schoolers.

(post by NickK3 removed for political trolling and baiting)
neutronflux

posted on Jan, 2 2017 @ 01:22 PM
link
Obama thinks the United States created the worlds problems and the US should loose its privileged status for interfering?

Obama tries to manipulate Israel's presidential election, uses illegal drone attacks in Pakistan, tried to influence Britain's vote to leave the EU, tried to put the Muslim Brotherhood in charge in Egypt, conspires with Soros to create deals that benefit Soros at the expense of the world, and doesn't see why his "chickens come home to roost"?

Talk about being a hypocrite.

National and diplomatic relations - keep your friends close and your enemies closer.

Look at it this way, Japan attacked us and they were our enemy for how long?

Worked it out with them and they've been what, for how long?

Exactly. No need to keep permanent enemies....just because they were once, doesn't mean they always have to be.

Who helped us defeat whom in what war? Oh yea, the Russians..and what did we do in return? Questions, questions.

I say he's smart to open a dialog with them, diplomatic and national relations doesn't equate to making bad deals and handing over parts of our freedoms to them, like Obama is saying we need to give the UN.....

Has to be some sort of olive branch and dialog...can't keep pissing into the wind....it's catching up with us...

The issue is that Trump thinks Putin is his friends.

I'd not say friends...not by a long shot.

Wait and see, his actions will be the things he's judged for, not speculation or the like. 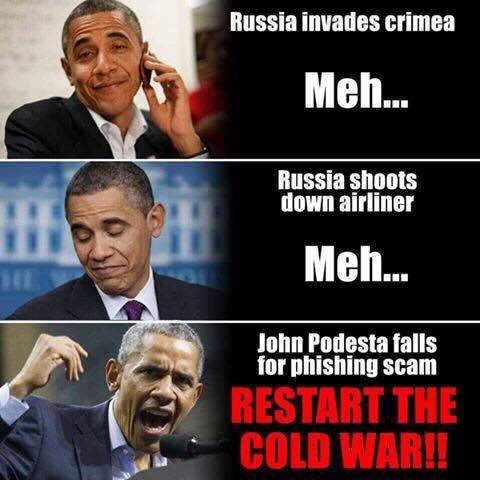 Remember when Russia invaded Georgia in 2008?

Russia is very hostile when it comes to NATO, and the fact Trump thinks Putin is his friend should worry you.

posted on Jan, 2 2017 @ 02:29 PM
link
Putin and Russia doesn't like NATO because it's a sort of binding agreement that puts that country under the influence of the West. Russia wants Europe to be under Russian influence.

If Trump attempts to pull NATO back Putin is going to swoop in and establish Russian relations in those countries attempting to put them under Russian Influence.

posted on Jan, 2 2017 @ 02:36 PM
link
I don't know about Trump cozy with Putin, but if it makes people angry, that tells me it's a very good thing. Most of the things Trump does will go through this very simple reasoning process. It makes him traitor-proof... because if he were a traitor to the country-- that would mean both Democrats and Republicans would be mad, and probably freaking out and sad, and so that would only be a good thing and thus reason to cheer him on. I have trouble understanding complex issues, so I resort to the simple test of "is he upsetting people?". It helps me avoid thinking too hard or even having any integrity.

Imagine the great things that can be accomplished if we can get the huge corps and uber wealthy from twisting our govt into pointless weapon build ups and cold/hot wars.

Anyone who thinks that Putin has any interest in cutting back on weapons is an idiot. Maybe he doesn't want to bomb the world, but he's no flowerchild that's for sure.

The Russians have a mentality a lot like the Arabs as far as showing strength, fighting over any little bit of territory, etc. This is a man who is telling his people to have more kids because of the primitive belief that more people mean more power.

posted on Jan, 2 2017 @ 02:42 PM
link
Putin is a creature and puppet of the Russian oligarchs just like Trump is a puppet of American oligarchs


That’s why were doomed

Here is one of Trump's picks comments recently... John Bolton:

Bolton: Putin needs to change before relations with Russia can improve

posted on Jan, 2 2017 @ 02:58 PM
link
The question is how has the US influenced Russia these last 8 years with Obama's limp wrist tactics of a little bark with zero bite? As BigFat said, we need to go another direction with all this and I think Trump is in a better position to create a deal that favors the US and not just keep costing us time and money with zero results as it has been with Obama....

I do not think Trump will be nice with Russia if they mess around with us, unlike Obama's "I told Putin to cut it out" mentality Trump I feel has teeth.

posted on Jan, 2 2017 @ 03:47 PM
link
I'm much more concerned with the EU starting their own army than I am of Russia's military. EU globalists are far more dangerous to the U.S. than Putin is, I think Trump realizes this, which is why he isn't so hostile toward Putin. In reality the US and Russia should be joining forces to combat the globalist agenda that seeks to destroy both of our nations.

I find your post too complex, requiring too much thought. If Trump's pick makes people angry it must be good. That is the only thing I know for sure.