page: 1
28
<<   2  3 >>
log in
join
share:
Shamrock6
+3 more
posted on Dec, 29 2016 @ 01:21 PM
link
The US Government is really going all-in with the "Russia hacked the election" narrative. Just saw a breaking news alert that the US Government has ejected 35 Russian intelligence operatives from the US and is also levying sanctions at specific members of Russian intelligence agencies.

This is supposedly the strongest response ever to a "state sanctioned" hack. Apparently the current administration had the option of issuing the sanctions and taking further action before the election, but decided not to. Certain members of the admin are saying they believe that was a mistake.

Yet through it all, almost in passing at the very end of the article, the writer says that "American officials" say there's no evidence of any attempt to manipulate votes or voter rolls.

They should have sanction Russia after the evidence was shown, it is worth noting that Trump dismisses the hacking being true and is probably going to take a different direction in about 20 days, so if there is no evidence, these actions are worthless.

So Russians supposedly exposed corruption within our government, and this is our corrupt governments response.

That's not why they got the boot.

They got the boot because of similar treatment to some of our folks in Russia over the past couple years.

khnum
+5 more
posted on Dec, 29 2016 @ 01:32 PM
link
I rarely agree with Australian media but they have the problem identified Obama is conducting a diplomatic scorched earth policy to make things as big a mess as possible for his successor.I think he is nearing the point where a Sergeant at arms style intervention may be necessary.

Obama and all the acronyms have shown no evidence of the hacking.
What Obama is doing right now is an act of war.
Believe me when I say Putin and the Kremlin will not wait 23 days for Trump.
There will be retaliation.

Generally speaking, when one is expelling diplomats because another country expelled yours, you don't want to wait a couple of years to do it.

WASHINGTON — The Obama administration struck back at Russia on Thursday for its efforts to influence the 2016 election, ejecting 35 Russian intelligence operatives from the United States and imposing sanctions on Russia’s two leading intelligence services, including four top officers of the military intelligence unit the White House believes ordered the attacks on the Democratic National Committee and other political organizations.

Mr. Obama and his staff have debated for months when and how to impose what they call “proportionate” sanctions for the remarkable set of events that took place during the election, as well as how much of them to announce publicly. Several officials, including Vice President Joseph R. Biden Jr., have suggested that there may also be a covert response, one that would be obvious to Mr. Putin but not to the public.

Yes people how dare Russia expose our government for the fraud it is!

If they did it at all.

Next time Russia 'hacks' our election tell them not to give the CLintons 2 million+ votes more than their preferred candidate.

the bigger the empire... the weaker it become
history proven!!!!
trump understands it....

The current Administration has a bitter revenge operation going.

Haha, Obama is going to open the door for a better part of the world to sanction us for actual interfering with elections... And maybe toppling whole countries, womp womp.
edit on 29-12-2016 by CriticalStinker because: (no reason given)

I think Obama doesn't care about the hacking. He just want to make all the mess he can, just to f### Trump.

All the world can see now the kind of person he really is. 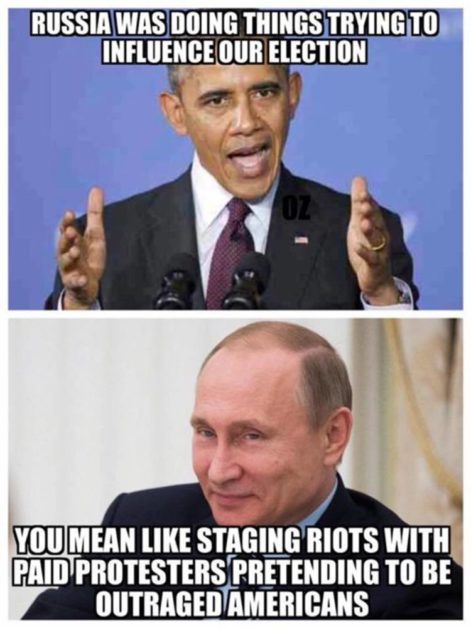 By all means people 'punish' Russia!

posted on Dec, 29 2016 @ 02:00 PM
link
B.T.W
Holland had once a man like Trump
mr Pim Fortuyn...
he was gonna to win the elections then
the day after the CIA visited him and came back with empty hands he was killed !!
hmmmm
politics ??
at least the system was saved by his death....

originally posted by: khnum
I rarely agree with Australian media but they have the problem identified Obama is conducting a diplomatic scorched earth policy to make things as big a mess as possible for his successor.I think he is nearing the point where a Sergeant at arms style intervention may be necessary.

1. Economic recovery? FAIL. The Federal Reserve is buying back treasuries and pumping the stock market with "QE" every month.
How in the f# can you fairly price a market with up to a trillion dollars in accommodation each and every year?? Look around....look in your wallet.... yeah, recovery my a#.

If anything, he certainly budgeted for veterans, no doubt.

His only real legacy is being part of the first gay couple to be president/first "lady" in history.

Personally, given that Russia has all but ended the war in Syria, which is what the US was supposed to do but didn't or couldn't, given that Russia created a safe corridor for civilians to leave Aleppo, which the US couldn't or wouldn't (despite bleating on and on about the poor people), and that Russia allowed the rebels to leave in their tens of thousands when they didn't really have to, and given that Russia is very energy rich (that Europe very much needs)..i really don't think Russia could give a toss about the US 'punishing' it.

And if there's a sour grapes, spitting feathers soon to be EX-president, who seems hell bent on harming his own country for nothing but very cheap shots at the eleventh hour, i really don't think it's going to be Putin.

If a country / President needs it's bottom smacked and sent to it's room with no supper...i don't think it's Russia or Putin.
edit on 29 12 2016 by MysterX because: added text

posted on Dec, 29 2016 @ 02:07 PM
link
It's realy interesting what will Trump do when in office. My guess is he will flip-flop once again and won't cancel the sanctions and also gradually agree with the russian hacking allegations, trying to save face at the same time.