1. Ten U.S. sailors were kidnapped on January 12, 2016 after accidentally straying into Iranian waters

I want to express my gratitude to Iranian authorities for their cooperation ‎in swiftly resolving this matter,” Kerry said in a short statement.

He added that he was particularly attuned to the situation reminding the nation that he was “a former sailor myself” and understood the importance of Naval power.

Kerry signaled that the incident was not a sign of provocation, but rather a symbol of how the two countries could work together after Iranian nuclear deal.

“That this issue was resolved peacefully and efficiently is a testament to the critical role diplomacy plays in keeping our country safe, secure, and strong,” he said.

HMMM SO LET ME GET THIS STRAIGHT BEING HELD AT GUNPOINT IS NOT A SIGN OF PROVOCATION? SEEMS MORE LIKE WEAKNESS TO ME NOT STRENGTH.

Obama, Aug. 20, 2012: I have, at this point, not ordered military engagement in the situation. But the point that you made about chemical and biological weapons is critical. That’s an issue that doesn’t just concern Syria; it concerns our close allies in the region, including Israel. It concerns us. We cannot have a situation where chemical or biological weapons are falling into the hands of the wrong people. We have been very clear to the Assad regime, but also to other players on the ground, that a red line for us is we start seeing a whole bunch of chemical weapons moving around or being utilized. That would change my calculus. That would change my equation. … We have communicated in no uncertain terms with every player in the region that that’s a red line for us and that there would be enormous consequences if we start seeing movement on the chemical weapons front or the use of chemical weapons. That would change my calculations significantly.

They used Chemical Weapons. THAT WAS A ACT OF WAR.

In response to the 14-0 vote by the UN Security Council to condemn all Israeli building and activity in the West Bank as “illegal,” including building in the Jewish Quarter of Jerusalem and Israel’s sovereign access to the Western Wall, the Prime Minister’s Office in Israel has issued the following statement, strongly denouncing both the resolution and the Obama Administration, which broke decades of diplomatic precedent by abstaining, thus allowing the resolution to pass. Israel accuses the Obama Administration of having in fact “colluded” behind the scenes to produce both the vote and the resolution itself: “Israel rejects this shameful anti-Israel resolution at the UN and will not abide by its terms. At a time when the Security Council does nothing to stop the slaughter of half a million people in Syria, it disgracefully gangs up on the one true democracy in the Middle East, Israel, and calls the Western Wall “occupied territory.” The Obama administration not only failed to protect Israel against this gang-up at the UN, it colluded with it behind the scenes. Israel looks forward to working with President-elect Trump and with all our friends in Congress, Republicans and Democrats alike, to negate the harmful effects of this absurd resolution.”

If Obama is not a Muslim why is he is so willing to make a deal with Iran but tells Israel to go uck itself?

BUT Trump accepting a call from Taiwan is bad and breaks years of the one china policy agreement.

originally posted by: PlasticWizard
I saw a video earlier of an interview with young Barry where he says his mother was a Muslim. I'll try and find the link.

Thats the problem. Obama is making a deal with extremists.

That is a problem. I'm cool with Muslims, just not the backstabbing or extremist ones. That goes for all religions and races.

They were not 'kidnapped' they were legally detained.

They were a military unit so yes, gunpoint is how you do it.


They used Chemical Weapons. THAT WAS A ACT OF WAR.

Supplied by other countries. The Iraqi stockpile was made by good ole Uncle Sam.

All countries have a right to guard their borders, land and maritime.

Your President can choose his own religion. It is his God given right.

posted on Dec, 26 2016 @ 12:25 AM
link
I agree with obama and the un...Israel are taking the piss and other people's land by force.
Oh and proof? that word is thrown around a lot especially when it is not proof.

By the USA... as they invaded Iran's territory! Funny how you want to twist the facts!

No doubt, kinda funny till you realise that is actually how far removed from reality some people are.. a lot of people apparently. 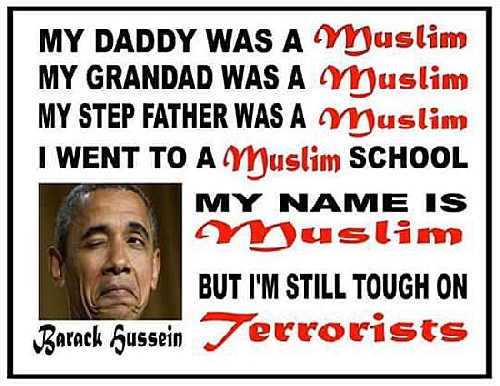 posted on Dec, 26 2016 @ 02:48 AM
link
What I always find funny about all this "Obama is a Muslim" tripe, is that the string of leaders before him were hardly what one could call Christian. Unless of course, lying repeatedly, stealing, coveting what others have and war are now considered Christian values!

posted on Dec, 26 2016 @ 02:52 AM
link
In many Muslim countries Obama would probably be put to death on the suspicion of being gay.. If some of the videos and Jone Rivers statement was correct Michele would probably get the hole right next to him to receive her fair share of the stones.

I do not care if he is Muslim or whatever as long as he puts America first... Which you had to wonder these last 8 years at some of his decisions. Obama has been no friend of Israel right or wrong for whatever reason.. That will definitely change with Trump.

Good news is hopefully he will go to the great retirement community with a supreme golf course next month and other than MSM covering something he has said about the direction the country is heading under Trump we will not have to put up with his B.S.

Good thing he's going out, nobody cares anymore. But lets switch now to Trump is a Nazi. This will be the new thing next month, just soon enough so lets all dance and be happy, this will never end

Trump is a incestuous pedophile, you know. It's obvious by the comments he has made about his daughter. It's on youtube, so it's undeniable. And look at the pics of her half naked on his lap with his hands practically groping her crotch. Disgusting. Lock him up!

Hee hee. This is going to be fun.

So it's wrong to apprehend people trespassing?

I'll have to remember that.

Why shout?
No, I'd say held at gunpoint whilst apprehending trespassers would be fairly standard, what would you expect?

A hamper delivered by scantily clad women and a kiss for trespassing?


They used Chemical Weapons. THAT WAS A ACT OF WAR

What the hell are you on about? Acts of war during a civil war is an act of war? Seems like common sense to me, again what do you expect? Charge of the feather dusters?

Assad under supervision removed ALL chemical weapons deemed to be commiting war crimes if used.


If Obama is not a Muslim why is he is so willing to make a deal with Iran but tells Israel to * itself?

It's about time a US president didn't use the power of VETO to protect atrocious acts committed by Israel.

Obama isn't a Muslim, your post is full of fallacies and the recent unilateral decision regarding Israel doesn't make it so. I'm guessing the leaders of every other nation who supported and VOTED for this decision is Muslim too.

Or is it just Obama because "Obama" and he hates Israel?

He can take calls from anyone he likes. Until he is sworn in that's all he can do. Personally I think he's going to listen to the war hawks and make a pig's ear of diplomatic relations with multiple nations but that's an opinion neither here nor there yet.

Here have a beer seems you need it or maybe lay off it?

Maybe the US is waking up to the fact that Israeli settlements are an affront, and their continued expansion is a real barrier to peace.

I am a supporter of Israel. They are the only democracy in a sea of intolerance and belligerence, and have a right to exist. However, Israel needs to take a clear step towards gaining the moral high ground and that is not going to happen if they have policies that are antagonistic and plain wrong.

Who cares if Obama is Muslim or not - so long as he isn't acting in an extremist way or promoting his religious beliefs in office, then fine.

Also, Israel is just as much a terrorist state as Palestine is, if not more so, depending on your view of how their treat the 'hosts' of their occupied land.

It's about time someone gave them a slap and told them to stop whining. They aren't the victim. They are the aggressor and I'm glad, at least for now, the US is taking a step away from them.

So American atheists are actually Christians if their parents were Christians? Got it!

originally posted by: Britguy
What I always find funny about all this "Obama is a Muslim" tripe, is that the string of leaders before him were hardly what one could call Christian. Unless of course, lying repeatedly, stealing, coveting what others have and war are now considered Christian values!


And don't forget, Republicans were attacking him over his controversial Christian Pastor Jeremiah Wright before they settled on the "he's a Muslim, hurr hurr hurr" crap. Surely they remember Wright, who was the main Pastor at the church Obama attended for roughly 20 years in Chicago?