Russian exotic weapons, you can END the war in 2 weeks, hydroneuro - sound

posted on Dec, 25 2016 @ 01:01 AM
link
Anyone who spent any time researching military hardware and chem-bio development knows that both Russia and USA and even China have at disposal classified exotic weaponry

With the US being in front of it.

These secret exotic weapons are secret for a reason, in case of real war and need for real homeland defence these weapons are the surprise cards to be played

Now hear me out

Unlike past proxy wars, this time it isn't in Russia's interest to just have a stalemate, they really want to win in Syria. Why don't they ship in the equipment and crew straight from Russia and CLEAR OUT front lines

Sure they have just cleared Aleppo but this is soooo sloooow

City by city, block by block, OMG I can't watch this anymore

Russia has nerve gases that can kill in matter of 5 seconds, or put you to sleep in 2 seconds

Russia has ELF weapons that can induce seizures and blindness

Russia has sound weapons that would drive you mad in matter of seconds, enemy subjected to this starts to run on mass just to escape

SO why not end this war

How about a hydrogen bomb for God's sake, just clear out the front lines already........geeesh I can't watch this war anymore

What ? You don't like hydrogen bombs ? You think that's not cool.

FINE, launch a few rockets and put them all to sleep, nice and gentle.

Would that be invitation to US to start going exotic crazy too since Americans have even greater abilities ?

Maybe they don't want Israel foaming at the mouth since all of this is close to Israeli borders ?

Maybe aliens told Ruskies and Yankees, keep it civil or we'll swoop down teach you both a lesson ?

For a guy so vilified in western media, Putin is showing remarkable restraint again and again.

If I were Putin I would use Hydrogen bombs on ISIS by now, those guys want to go to God anyway

i think this is the point Ben Carson was trying to make at debates which most people are not getting, if military is given the green light to end the war swiftly, THEY CAN

What I remember is that according to something I once read is that back just before the Chernobyl disaster the Russians were developing a radar based disintegration technology, there own form of star wars if you like.

It apparently require the output of the Chernobyl reactor, so I wonder if there is a link there to that, to power it as it's weaponize'd signal required extreme amount's of power and amplitude.

A target drone, aircraft, satellite or missile would be radar locked, the radar then would output a broad radio spectrum of different wavelength's a little like a radio mass spectrometer and the absorption of the wavelength's would be analyzed in the return echo signal to create a radio spectrum absorption profile, the inverse complex conjugate of this absorption spectrum would then be transmitted at the incoming target at extreme amplitude (nuclear reactor powered) and this in turn would cause a harmonic destabilization of the object at the atomic level, the molecular structure would gain increasing kinetic resonance and super heat and disintegrate in the air.

So it does make you wonder what they have now, of course stealth would have been it's Achilles heel if you think about it.


If I were Putin I would use Hydrogen bombs on ISIS by now, those guys want to go to God anyway

Great idea, let's use nukes in Syria. What a disgusting thought regarding innocent lives, not only that, I'm sure the faux outrage from the US and friends would go into overdrive and we would have a nuclear war...and all just because your life sucks and you have a death wish and zero empathy.

Yeah right...under government surveillance...lol... What makes you think that you are so important?

HELL I'd be MORE worried what OBAMA woulds have done with ANTIMATTER from CERN !

Well YOU heard 'im GO dig up all your interferometer weapons we BOTH must turn them in...
edit on 25-12-2016 by cavtrooper7 because: (no reason given)

Do you think perhaps 'the nuclear' will solve your concérns?
I dont understant the op.

posted on Dec, 25 2016 @ 03:10 AM
link
Its possible Russia is trying to keep the World on its side by being the good guy and by playing to the rules, if they were to say use exotic weaponry that is banned for use in war the public opinion of the world would quickly sway against it. Modern warfare is about winning peoples minds, if it can keep stepping back when provoked and attacked and win the public minds then its hard for the West to go full blown against it.

Russia knows the West is baiting it into a full blown war, the proxy wars are now done with Russia drawing a line in the sand at Syria. The economic wars are pretty much done with everyone losing and the cyber warfare is still sporadically occurring with the propaganda machine in full swing blaming Russia for everything.

The only thing to happen now is for full blown "Hot" warfare which no sane person would want.

Not dreaming of lollipops and gingerbread men?

Thanks for all the education of the myriad craziness of death and destruction.

Maybe being followed (pls check in with your head doctor) is playing tricks with your mind.

Best wishes for a speedy recovery.

A lot of the things you describe are actually over-advertised junk. They don't do a satisfactory job in the real world. It's all about getting paid for research, development and manufacturing. Once everyone's been paid they're happy. Try to use it and you wonder how you could have been such a fool as to pay for it.


Maybe aliens told Ruskies and Yankees, keep it civil or we'll swoop down teach you both a lesson ?

Geneva Convention. basically answers your question.
There are rules to warfare you know.


I don't recall ever making it before. Perhaps you know better. If so please enlighten me that I may indulge in a little introspection. Also, why do you ask?

the claims of wunderwaffen

the excuses trotted out for why they are never used

posted on Dec, 25 2016 @ 06:38 AM
link
the front lines dont exists its urban, it would mean wiping out civilians and also the government forces

I must have heard it from others if you haven't said it before. It seems such a common brush-off.

There are many clowns in the surveillance business. They do stuff every working day. We who push the boundaries find ourselves followed and surveilled. Sometimes it's a little annoying, annoyed people can act unreasonably, so they tend to look ashamed and scurry away at the first opportunity when they realise they've been noticed.

Your statement indicates you don't know why the OP may be of interest. It's serious for those of us who try to make a difference. Laughing, as in lol, is a childish reaction.

No offence meant but I would suggest you think carefully about your own life and ponder on the fact you know next to nothing about others.

He tried to unite patched bikers worldwide and that led to the Waco Biker Massacre. 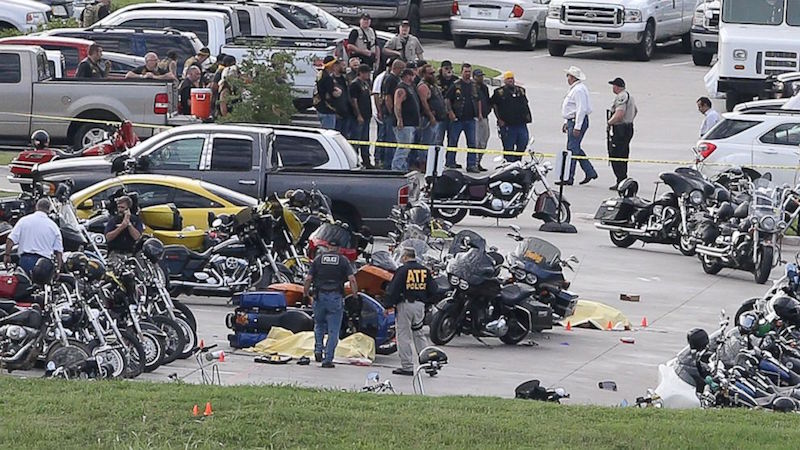