what reality are you living in???


and the banksters are god

???occupy wall street ring any bells???
what about this one:

You guys are just totally distorting my point here, even if not you're intention. We would all EXPECT Fox to push the war beat for Dubya. This whole thread about that period would be a non-story. The Big Story bout all this during that era the Liberal Media channels, and the 2 main liberal media newspapers were all primary ringleaders. The very same outlets that have been pushing the precise stories I've observed you guys running wild foaming at the mouths all years are the very same that sold us Bush's war then, went on to act like they were anti-war when that became the Democrat's comeback charade of a routine, and now hep push Obama;s war in Syria, and a civil war at home, and its time you guys break free from their narrative that had us on the brink of nuclear war with Russia, have the Middle East in total devastation, millions of peoples lives destroyed, every group here fighting over NOTHING, etc, et al, so forth and so on.

Everyone's being played, especially if they're marching to the tune of the MSM. And what liberal storyline in this site ever isn't straight off of CNN? "FAKE NEWS"? The "PropOrNot" 'fake news' blacklist site even has liberal anti-war news outlets listed it in it as Russian state sponsored "fake news" outlets for being critical of Hillary's war in Syria. And the sick part of that is that kind of perspective, where people are rabid against her, I hardly ever catch a hint of that sentiment in this site. Instead, its just pro-Hilllary HATE-Trump for being a jerk etc etc etc all the same exact crap same exact perspective as I'd expect from someone who just watches CNN. And maybe this isn't everyone in ATS, but for the ones I see around it's few and far between whom aren't cookie cutter molded. Supporting censorship, defending Hillary & Obama on being brutal war mongers, blaming the conflict on Russia, skipping past the scope of the WIkileaks and making the entire debate about it allegedly being Russia, all of the above being used as the excuse to censor fake news (even though Obama will be out and the MSM will be for the most part running with the GOP talking points again unless they're total NWO scum).

The democrat's I remember from a decade ago would kill themselves in the face of this.

When both parties are both big government and big business all is lost.

originally posted by: IgnoranceIsntBlisss
a reply to: dawnstar

Apparently in your attempt at making history fit into your anti Democrat agenda you conveniently forget what really happened.

posted on Dec, 24 2016 @ 11:16 PM
link
Actually, the section of this bigger piece I was working on that brought this list project on, the way I'll be writing that section to where this is intended to be linked in, in in an entirely different context. And I probably should have written the intro along those lines.

And then again this was a quick and dirty supplemental, and I got to say I've been beat up all year in seeing the Democrat's became the Warhead Party . Seriously on a whole other wave length than 10 years ago. Maybe many of 'them' were too young to remember then I dont know. But I'm seriously compelled to keep trying to remind 'them' of who 'they' used to be.

If I had more time, and less disappointment in all that, I'd probably have better delivery. The Democrat's seriously need to break free of the spell of the DNC, Obama, Hillary, MSM, etc. The Republicans had by the time Bush was out. For the Dem's to be doubling down on their Corporatocracy cronies is seriously disturbing.

originally posted by: IgnoranceIsntBlisss
a reply to: olaru12

I've been following your threads and your agenda is so obvious and transparent. Pushing the Rush and Hannity BS program message and trying to make it look fair and balanced....but failing

in the face of what??
fake news...gee, the "fake news" in my opinion has been going on for quite some time and has already done way too much damage. gee, now that we are going to have another reign of republican, conservative rule, they will do something about it?? guess who's voice is gonna be censored... give you a clue it's not gonna be the trump supporters!
the banks and their many games to defraud the american people...
well guess what... it's the republicans that want to give take us back to what we had during bush that caused the last bust during bush.

now if you want to say that when it comes to those who hold power, the dems and the republicans are just the two sides of the same coin, I will buy that, but then, you are accusing the liberals...
NOT THE FASCISTS!!

Oh, I guess they mixed it with COD. The full music video been blocked from youtube all year.
edit on 24-12-2016 by IgnoranceIsntBlisss because: (no reason given) 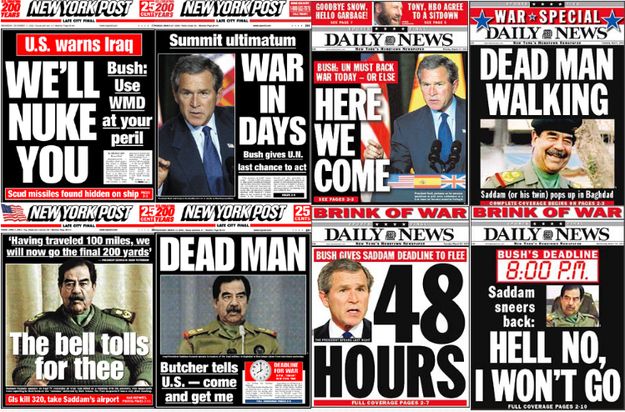 I remember how ats was back in the bush years...
bush wasn't a liberal back then, matter of fact the liberals on this site were getting knocked all around by all those "compassionate, conservative, republicans".
much like they are now really.
if we weren't with them, we were against them!!
torture, no fly lists, patriot act.... oh no, don't speak out against them or you are in league with the terrorists!!!
then suddenly, everything blew up in the neocon's face... the world economy tanked in their watch, the people got tired of the wars and they found it much harder to occupy these countries than it was to overthrow their governments, and they lost the elections...
and suddenly.... Bush was a liberal!!! nope, couldn't take responsibility for their own actions, had to throw their own under the bus like they had all the liberals..

at least this time if things blow up in your faces, and they probably will.... there's a good chance that you will be right when you say trump was a liberal!! but then, you will have to explain how he conned you all into believing that he wasn't.

Is it even possible in your reality that a staunch critic of the liberal media and Democrat machine NOT be a Republican?

Back a decade ago I was every bit as staunchly against the Neocon's aka Republican's and their war as I have been against Obama and His.

Now, after Obama had his 8 years, he went full Neocon in the Middle East, and despite the ruthless opposition Bush received from ye Democrat's, now you all bow and scrape and lick His boots over going full Bush.

My intent with how I framed this post was to remind you all that Democrat's are supposed to be against destroying the Middle East, and to remind you that the Liberal Media MSM is a farce. DINO = Democrat In Name Only. Meaning you guys need to snap out of this insanity the MSM and Federal Government / Military have you all brainwashed.


Now, after Obama had his 8 years, he went full Neocon in the Middle East, and despite the ruthless opposition Bush received from ye Democrat's, now you all bow and scrape and lick His boots over going full Bush.

really, because it seems your intent is to blame everything bad, regardless of who created the mess, on the liberals..

and just who is "you all" that is licking his boots?? does obama wear boots in the white house??? oh, never mind doesn't matter.but that "you all" is me, is it? I mean, I've consistantly have spoken out against obamacare, although I do point out there was a major problem within the healthcare system before obama care began. and I've challenged the war mongers (who still seem to be mostly the conservative, compassionate christian republicans) to find the danged money and tell us where you plan on getting it from before you start that new war!!
call them facists, call them neocons, but bush and gang were not liberals.

He has attempted to backtrack from his OP title....funny to read.

Unless you're part of the MSM (or the DNC/RNC or BushCo./ObamaHillaryCo.) then quite acting like this is about YOU.

The MSM brainwashes everyone and then criticzing the MSM becomes a direct attack on the brainwashed masses? This is insane! 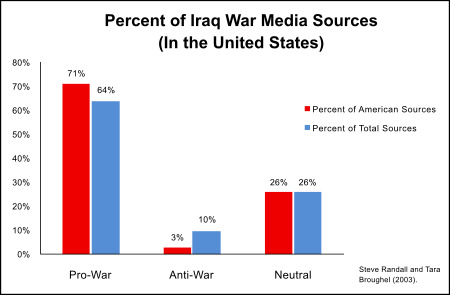 Amplifying Officials, Squelching Dissent
FAIR study finds democracy poorly served by war coverage
Since the invasion of Iraq began in March, official voices have dominated U.S. network newscasts, while opponents of the war have been notably underrepresented, according to a study by FAIR.

Sources were coded by name, occupation, nationality, position on the war and the network on which they appeared. Sources were categorized as having a position on the war if they expressed a policy opinion on the news shows studied, were currently affiliated with governments or institutions that took a position on the war, or otherwise took a prominent stance. For instance, retired Gen. Wesley Clark, a hired military analyst for CNN, was not categorized as pro-war; we could find no evidence he endorsed the invasion or was affiliated with a group supporting the war. However, retired Gen. Barry McCaffrey, an NBC analyst, was classified as pro-war as a board member of the Committee for a Free Iraq, a pro-war group.

edit on 11-1-2017 by IgnoranceIsntBlisss because: (no reason given)