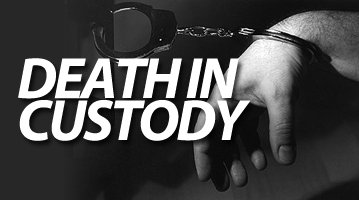 The Bureau of Justice Statistics released its findings on arrest-related deaths on Thursday, which estimated about 1,900 people had died while being arrested in 2015. That estimation was based on media reports and police reports for June, July and August of 2015.

Of those deaths in June, July and August, 64 percent were homicides, defined as willful killing of another, 18 percent were suicides and 11 percent were accidents, according to the Bureau of Justice Statistics. Homicides include those ruled justifiable, such as in cases of self-defense.

The Bureau defined arrest-related deaths as any deaths that occur while a person is being detained by law enforcement in an official capacity, when their freedom to leave is limited by an officer prior to or during an arrest, and any death in a lock-up or booking center.

The Bureau started with media reviews, which found 1,348 potential arrest-related deaths in the United States from June 1, 2015 through March 31, 2016. That came out to an average of about 135 arrest-related deaths per month. Those media reports identified 379 deaths in June, July and August 2015, but by reaching out to law enforcement agencies to confirm certain deaths the Bureau found there were actually 425 deaths during that period, a 12 percent difference.

The Bureau of Justice Statistics projected the 1,900 arrest-related deaths for 2015 by relying on media reports and assuming the 12 percent difference across the year.

Those numbers are ridiculous. I wonder how off they actually are? It's amazing to me that these incidents are purposefully tracked.

Several hundred million people have not been in police custody in a 12 month period.

Not good at math, eh? You must be terrible at assessing risk in your life.

posted on Dec, 20 2016 @ 08:12 PM
link
I was drinking one night which was the last time I drank in 96. I was privy to corrupt LEO's both federally and locally. I had been put in a cruiser due to an altercation at the bar. I started running off the mouth about these individuals and this mighty cool officer took me behind a mall and let me sober up before taking me home. He said, "I know the officers your talking about and if I take you downtown and you talk like that they will kill you". I actually knew better but the alcohol was talking. Liquid courage and all.

I don't doubt for a minute some individuals meet with accidents because they run their mouth a bit too much.

originally posted by: LifeMode
Those numbers are low. 1900? We have several hundred million people here. That's only 3.1 a month per state. Not bad at all.

I think this "nothink tank" or whatever it is, is also counting people who were killed, and then arrested. Weird methodology isn't it.

originally posted by: carewemust
"nothink tank" or whatever it is

You mean the Department of Justice?

Did you bother to even read the article and its source? Obviously not.

With the exception of June,
the number of deaths was fairly consistent across months,
ranging from 87 to 156 arrest-related deaths—an average of
135 deaths per month.

BJS conducted a survey to confirm and collect more
information about the 379 deaths that were identified
in June, July, and August 2015. The survey asked law enforcement
agencies and ME/C offices to confirm or deny
those potential arrest-related deaths and to identify other
deaths meeting the ARD program scope that were not
identified through media review. Preliminary survey findings
indicate 425 arrest-related deaths occurred in the United
States from June to August 2015. Using information captured
from media sources from June 2015 through May 2016 and
assuming another 12% identified directly from agencies, an
estimated 1,900 arrest-related deaths occurred.

originally posted by: carewemust
is also counting people who were killed, and then arrested. Weird methodology isn't it. 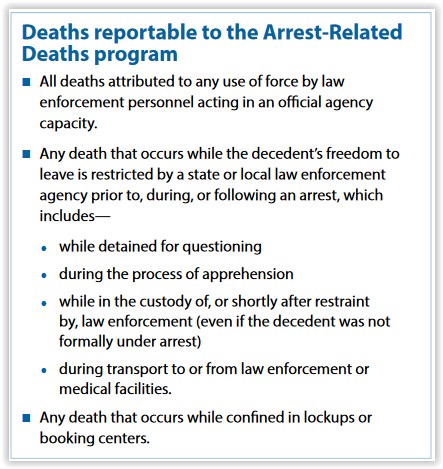 posted on Dec, 20 2016 @ 08:31 PM
link
For some strange reason around here, more people seem to be pointing guns at cops. I think it is assisted suicide myself. Maybe it is because they watch too many violent shows where criminals shoot at cops or something, or depersonalization or something. If you are pointing a gun at a cop, be prepared to get shot. If you go after a cop, be aware that you may get shot, they have a right to defend themselves if someone is coming after them with a weapon or attacking them. This is not Walker Texas Ranger on TV, cops do not duke it out.

I'm reminded of a case several years ago here in central Texas that made the national news. An elderly grandmother of, I believe 72 years old was pulled over for a simple traffic violation. Rather than complying with the office, she argued to the point that she was to be arrested rather than simply be given a ticket. Then it escalated into a resisting arrest charge which resulted in her being tazed to the ground. She didn't die, and she will probably complain to this day that she was in the right and the the officer was wrong in the way she was treated.

Today, the public frequently no longer feels the need to comply by what an officer demands. Unfortunately, minorities and the young (not to mention the mentally unstable) frequently go that route as it is their right to resist. The consequences are often not to their advantage.

So I reject any simple solutions to this problem by claiming that obviously law enforcement is the bad element here. It is more nebulous, more complex situation that has to do with the attitude of the public more so than the cop holding the tazer or the gun. Yes, unfortunate shootings happen and they should get the attention they deserve. But too often today the simple facts of the matter that eventually come forth are that the so-called victim was themselves at fault and should not be held up as victims of overt police violence.

posted on Dec, 20 2016 @ 08:36 PM
link
The real question is what number are innocently killed. I venture that number is less than 25 in any given year. Even that might be high and then that is being very liberal with "innocent".

There is no epidemic of cops just wantonly shooting and killing people.

So that leaves one third to what? Incompetence?

originally posted by: Aliensun
So I reject any simple solutions to this problem by claiming that obviously law enforcement is the bad element here.

I'm not making that sweeping pronouncement. But there is certainly enough evidence that far more unjustified occurrences take place than should.

originally posted by: Aliensun
It is more nebulous...

Which begs the question, why is it so nebulous? It's not brain surgery to require sufficient tracking and reporting of these incidents. In my opinion, it's not done, because they don't want it done.

I really don't understand how we don't have mandatory reporting to the federal government of deaths of people in encounters with law enforcement, in law enforcement custody, etc. Crime reporting is also piecemeal and severely lacking. It's 2016, we have databases for everything but we can't accurately track things like people dying at the hands of others and themselves?

Good point! In my birth state, you have to report how many larger non-human animals you shoot. Law enforcement should at least be held to the same standard when it comes to human animals.

posted on Dec, 20 2016 @ 09:55 PM
link
I follow a strict rule and I've passed it along to my kids : If you are arrested, follow instruction and Keep Your Mouth Shut except for these words... "I Want A Lawyer". Don't give them a reason to get shi**y, because they are some who are just hoping you'll mouth off and give them an excuse to "subdue" you because you were being "threatening".
Translates into "I'm a bully who is a little coward at heart and need to beat your ass to make me feel like a man".
I honestly hate to say it, because many are just average guys trying make a living....but I don't trust ANY of them. I look at them, the same way they look at us...They treat all of us with suspicion, because you can never tell who will go off the deep end.
Same goes for them.
edit on 20-12-2016 by DAVID64 because: I screwed up, ok?

Finally! Something you and I completely agree upon.

This doesn't happen because I think it provides too much accountability for them.

originally posted by: eluryh22
a reply to: loam


Hey, that's kind of like what they do with temperatures and climate models!

Not too long ago here in the UK someone died of a heart attack whilst being arrested. He was being aggressive due to having a heart attack and the police forcefully arresting him.

Died right in front of his father.

It was considered a tragedy (it was) and the officer who arrested him was, well let's just say he didn't keep his job. It never made the national news.

Although the US is huge compared to the UK, the figure seems high... I know incidents like the one I just mentioned naturally prompts investigation here and sometimes demands the need for better training even if it is a rare occurrence.

It just seems a bit screwed up that it's acceptable death within custody is justified in any way, it isn't is it?

Even prisoners of war should be treated fairly, deaths should definitely be investigated.

I know the police have a different role compared to those here, I just can't help but feel some don't give a damn about your human rights or those afforded to you by your constitution.

Your first bullet-point in that image says that the report counts ALL people that were killed by law enforcement personnel, acting in an official capacity.

The TITLE of the report says that all the deaths were "Arrest Related".

If an officer kills someone before arresting them, then how is that death arrest-related? That's why I felt that they were arrested after they were killed, which then makes the TITLE of this study accurate. Otherwise, it isn't an accurate title.

Is it likely that some innocent bystanders were accidentally killed by law enforcement? That first bullet-point would include them too.