EC Voting Almost Over, Can We Talk About Russian Intervention Now?

page: 1
27
<<   2  3  4 >>
log in
join
share:
theantediluvian
+10 more
posted on Dec, 19 2016 @ 04:15 PM
link
As of a half an hour ago, with the EC voting completed in 43 states, President-elect Donald J Trump had 259 electoral votes to 156 for Hillary Clinton. As predicted by myself and other non-hysterical posters, there was no great number of faithless electors. The much hyped fake "coup" scaremongering proved to be just more clickbait for the easily clickbaited.

Now with the EC paranoia behind us, will the hysterical denialism over Russian interference during our presidential election also become a thing of a past? Will we be able to have reasoned discussions about the evidence of the Russian goverment attempting to effect the election? How about their continued attempts to influence US politics? The implications of this sort of meddling and manipulation and what the appropriate response should be?

Or is still too soon and too likely to trigger some folks? 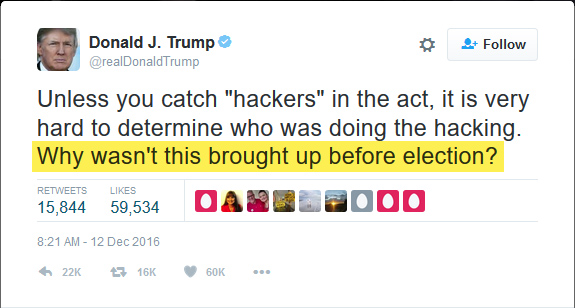 Ironically enough this is what VP-elect Pence was saying back on October 16th:

On Sunday, Pence for the second time in recent weeks broke from Trump on Russia, this time on that country's possible involvement in email hacks tied to the U.S. election, saying Moscow should face "severe consequences" if it has compromised U.S. email security.

"I think there's no question that the evidence continues to point in that direction," Pence said. "There should be severe consequences to Russia or any sovereign nation that is compromising the privacy or the security of the United States of America," Pence said on "Fox News Sunday."

Didn't the left such as CNN claim that hacks could not influence the election? They were so haughty. The irony.

Really? It seems to me like the people who's panties were most 'bunched' are you and the regressive left. Talk about making a lot of fuss over nothing.

Nikola014
+6 more
posted on Dec, 19 2016 @ 04:19 PM
link
The Russians obviously got electors drunk, which is just another way in which they influenced this elections

The rest of his picks seem like stooges for the Kremlin.


But other than that it's just another day in Washington.
Anyone who expected the EC result to go any other way but Trump's is delusional.

Yes, let us talk about it. When democrats get on board with simple measures to eliminate the potential for voting fraud among undocumented citizens ( ID's for instance ) I will start to take them more seriously when they make claims of election fraud.

Arizonaguy
+20 more
posted on Dec, 19 2016 @ 04:22 PM
link
I would have no problem getting behind condemnation of Russia IF the Obama admin and it's backers would admit that they did the same thing in Israel. Otherwise, you all can take a leap.

MysticPearl
+18 more
posted on Dec, 19 2016 @ 04:25 PM
link
Sure, let's talk about how the Obama administration apparently can't protect itself from basic hacking by foreign governments.

There's still no evidence Russia hacked or influenced the election, but if it were to be true all it suggests a complete failure from Obama's security team.

Now with the EC paranoia behind us, will the hysterical denialism over Russian interference during our presidential election also become a thing of a past?

So that's a "No?" You're still too easily triggered? Noted.

So far we've got 3 pro-Kremlin votes of "No" and one triggered Trumpkin.

Actually so far we seen 5 flags for warmongering against Russia.

And last time I checked.

Russia is ran by and ex kgb billionaire oligarch is isn't concerned with 'feelings'.

Strawman. Your cohorts have gotten too used to using them lately.

Says no one but the denialists and the St.Petersburg paid trolls.

A dried up, stale meme that became a useless right wing mantra on day two.


Then again, it's you, isn't it Neo!
No one sane expects a coherent or reasonable discussion with you.

Only the left gets triggered. I love how if the right fears something might be rigged in the election you call it "paranoia", but if the left does it you applaud it, spread it and then continue to mock the right as "in denial".

DISRAELI
+12 more
posted on Dec, 19 2016 @ 04:31 PM
link
a reply to: theantediluvian
As far as I can tell (being an outsider) the Russian intervention seems to have consisted of stepping in, gratuitously, to force open cupboard doors and reveal the skeletons inside.
The most effective ways of making this more difficult in future would be
stronger cupboard doors
fewer skeletons

The only strawman here is from those trying to create the boogieman from Russia.

CLinton did 'win' the popular vote.

So you realize it's a problem but partisanship won't allow you to address it? Obama will be out of office in a month, Putin will probably be running Russia until he dies.

The Obama administration didn't "do the same thing" in Israel but if this is really something that HONESTLY concerns you, perhaps we could discuss it as well as the influence Israel exerts over US politics? You sure sound passionate so by all means, lead the way.

Could you translate that from triggerish to English please? I think you're short circuting.

It's the only logical explanation.

This has got to be the dumbest thing I've ever read.
& the last dumb thing I read was probably your previous post.