The Russian ambassador to Ankara, Turkey, has been seriously wounded in a gun attack and taken to hospital, according to Turkish channel NTV.

Andrey Karlov has represented Russia in the country since 2013.

The gunman is still at large.

Initial reports suggested he was visiting a photo exhibit in the capital when he was shot in the back.

Photo of scene from Hurriyet: 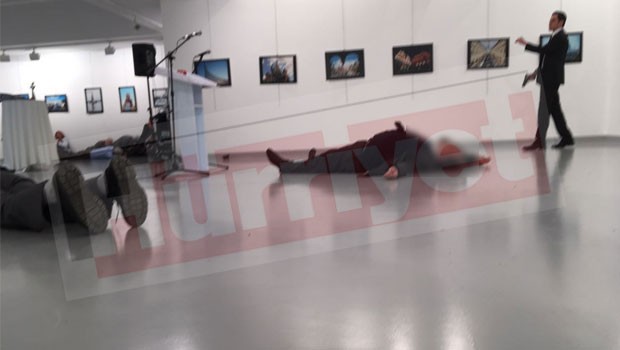 Google translated the Hurriyet article to try to tease out some additional details but it seems that picture might actually be the attacker. It seems that the Russian ambassador was speaking at the podium with a Turkish official and a man who was either part of the security detail or thought to be (or maybe just assumed to be by bystanders?) opened fire. Here's a poorly translated excerpt:

Hurriyet happened photojournalist Hasim Kilic said: organized by the Russian embassy in the photo had exhibition. A man in a black suit was standing behind the ambassador, who we thought was our protection when the embassy was speaking. And then he fired at the air. Then the ambassador shot. The attacker said more about Aleppo. Then he wanted people to go out. As the people went out, they fired a few more hands into the body of the ambassador. I guess one of those invites came to one of the invites. He said that the Contemporary Arts Center's security was entering by showing a police ID. There were about 100 people in the guesthouse and they were completely evacuated. As the people ran away, the ambassador fired a few more hands.

As you can see, it appears the person had law enforcement identification. He was saying something about Aleppo and I'm going to go out on limb here and say that Mr. Karlov is likely to be dead.
edit on 2016-12-19 by theantediluvian because: (no reason given)

Now we observe what Russian will do... World is just awful !

posted on Dec, 19 2016 @ 10:55 AM
link
Reports coming out on Twitter that the gunman was saying something (paraphrasing) like "you killed innocent people in Aleppo/Syria" after/during the shooting.

originally posted by: dollukka
Now we observe what Russian will do... World is just awful !

There's not a lot they can do I'm afraid.

Pretty horrible affair. I'm sure this event is a major toll on his loved ones. Sad indeed.


You don't have the guts to off yourself?

OT: It seems this is a terrorist related who wants to stop recent warming in Russia - Turkey relationships.