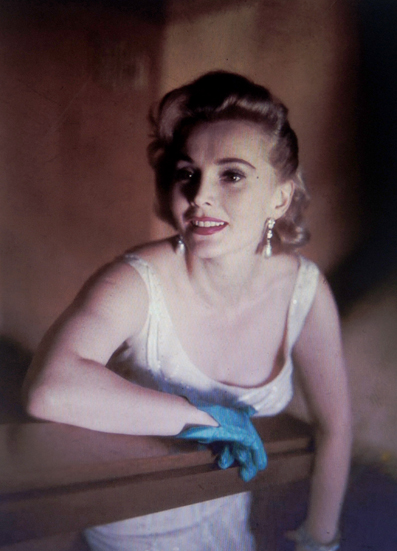 Zsa Zsa Gabor died at home of heart failure after suffering of bad health for a few years now. She was 99 years old, 2mths short of turning 100, as we know now, although she always refused to put the year of her birth next to February 6.

Apart from her acting career, Zsa Zsa Gabor was best known for her extravagant Hollywood lifestyle, a very glamorous personality (she was one of the first true socialites), and her many marriages, having had nine husbands.

Zsa Zsa had two sisters, elder sister Magda was also a socialite, and her younger sister Eva was an actress and businesswoman. The sisters, in their heyday, were known as glamour personified. In 1936 Xsa Xsa had been crowned Miss Hungary.

Zsa Zsa had one daughter, Francesca Hilton (grad aunt to Paris Hilton), who died January 5, 2015. Zsa Zsa's last husband never told her about her daughter's death, out of concern for her physical and emotional state.

Earlier this year Zsa Zsa expressed her wishes to move back to Hungary during 2017 to live out the rest of her life there. Her husband said, he would make her wish come true, He intended to arrange a big party this coming summer to celebrate Zsa Zsa' 100th birthday, after which she would return to Budapest.

These are just some brief moments from her long life. I personally love her best for her undaunted opinions and remarks on love, sex, marriage and husbands which she leaves behind as famous quotes.

A glamorous personality lost by an age gone by. I hope she's in a better place ... and happy there.

posted on Dec, 19 2016 @ 02:32 AM
link
Whoa ...did i mistake her...thought she had passes before Rivers. Might be because those dames were from my time. What...a Hollywierd loss! Oh my my too soon i say. Overrated sometimes.... I had always thought Magda was the real stunner.

wow what a year for celebrity deaths...

Magda Gabor actually was the least well known. her beauty was very natural. i'm amazed by her too. What a smile she had. But Eva Gabor, also an actress, was fairly well known, but died, i thik, in the 80's.

posted on Dec, 19 2016 @ 04:39 AM
link
I had always heard Pamela Anderson was related to her but im unable to find any proof. Anybody able to confirm?

posted on Dec, 19 2016 @ 05:52 AM
link
My dad is a retired research scientist. His secretary grew up with and was friends with the Gabor girls in Hungary. She also was a beauty, and we heard some pretty wild stories from the war days. Her favorite was Eva. She said Eva was very nice, but Zsa Zsa was kind of a bitch. The Gabor sisters likely went through some tough times then too. Its been along time but I remember her talking about Nazis stopping them to take their truck, but let them go when they say how small the engine was

I can swear she died some time ago.

This makes me sad; but she always kind of creeped me out because the first movie I saw her in was "Picture Mommy Dead." Maybe in her memory I'll see if I can hunt it down online and watch it again.

You might be thinking of her sister, Eva, who died back in the 1990s. I only remember because I always feel sorry for twins who lose their twin.


"I'm disappointed. I can't believe it," Gabor said, moments before the premises were cleared because of a bomb threat. "I can't believe that in a country as great as ours that a 6-foot-4 policeman can beat up a lady of 5-foot-4 and use dirty language as if she was a street walker. I think Russia can't be worse, or communist Hungary."

The strange, oftentimes uproarious Zsa Zsa Gabor trial was handed over to posterity on Friday, with a jury convicting the actress of slapping a police officer, driving without a license and possessing an open container of alcohol--a flask of Jack Daniels--in her $215,000 Rolls-Royce.

She certainly appeared to be a feisty older woman! Married 9 times I think I heard on the news.


Fox noted, however, that Gabor's age--reportedly 66--will be considered in her sentencing, as well as her history with the law. "There is a prior record," he added. "She was convicted in Britain of hitting a police officer with a pocketbook. She was fined $5,000."

A co worker described her as a 'Kardashian' of that generation.
Perhaps she was.
edit on 19-12-2016 by TNMockingbird because: forgot a quote

Very true, my friend! Faulty memory at its best.