Jessica Lynch: One of the Pentagon's ultimate absurdities in the annals of FAKE NEWS 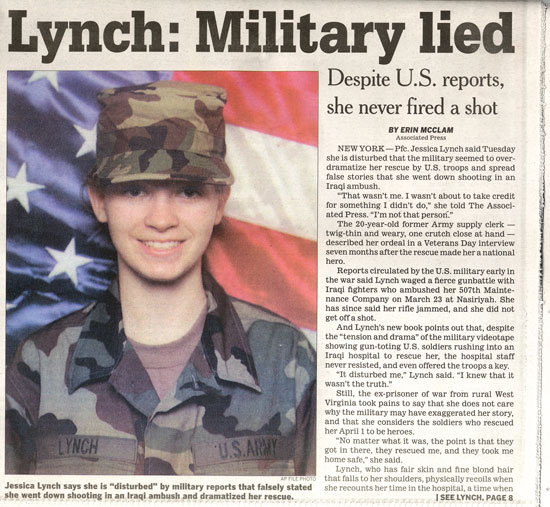 While going through the vast timelines of .gov & MSM propaganda campaigns over at History Commons I couldn't miss this saga of a FAKE NEWS campaign put out by the Pentagon back during the war in Iraq.

The Big Lie Of Jessica Lynch
Jessica Lynch. You know the one. The sweet, American-pie 19-year-old soldier and kindergarten-teacher wanna-be whose army squad took a wrong turn in Iraq and was, apparently, ambushed.

And some of her comrades were killed and she was taken prisoner, full of stab wounds and bullet holes, and she was whisked off to a ragged Iraqi hospital and held for eight days by vicious Iraqi guards and ostensibly abused, and later supposedly "rescued" in the most daring and macho made-for-TV moment of the war by elite teams of hunky U.S. Army Rangers and U.S. Navy SEALs. Wow.

Except that it never really happened that way. Except that Lynch herself doesn't remember a single thing and all the nurses and doctors and eyewitnesses on the scene say the Iraqi fedayeen guards had fled the day before the "rescue," and there was no danger whatsoever, no resistance of any kind, the U.S. forces could just walk right in, and they knew it. And the hospital doors were wide open, and the nurses and doctors had gone out of their way to provide decent care for our precious Jessica, considering the circumstances, and doctors even tried to return Lynch to U.S. forces themselves. And despite U.S. claims, Lynch had no knife wounds or bullet holes at all, just a few broken bones, and the dramatic and violent "rescue" was really just inane and silly and entirely faked and yet America bought it, hook, line and Rumsfeld, because it was on TV.

This story would be almost hilarious if it weren't done using an actual real life individual, whom was a hapless victim of the entire FAKE NEWS charade, and the war itself for that matter.

Lynch faulted the U.S. government for creating the story as part of the Pentagon's propaganda effort.

Soon after her rescue, Pentagon officials disputed a report appearing in the Washington Post that Lynch had fought back, and the first official report of Lynch's actions during her capture released by the Pentagon weeks later said that she did not appear to have fought back against her captors, in contradiction of earlier Pentagon press releases. According to one former Pentagon official, the stories of her supposed heroics that day were spread by the news media, and Congressmen from West Virginia were instrumental in pushing the Pentagon to award her honors based on reports of her actions during her capture.

Months after returning, Lynch finally began speaking to the public. Her statements tended to be sharply critical of the original story that was reported by the Washington Post. When asked about her heroine status, "That wasn't me. I'm not about to take credit for something I didn't do... I'm just a survivor."

Despite the letters of support she received after her testimony before a House oversight committee, Lynch says that she still gets hate mail from Americans who accuse her of making up the heroic acts attributed to her. "I was captured, but then I was OK and I didn't go down fighting. OK, so what?" she says. "It was really hard to convince people that I didn't have to do any of that. That I was injured, that I still needed comfort." en.wikipedia.org...

It's simply asinine how the DOD, CIA, White House, etc would ever have the cahones to come out talking about censoring FAKE NEWS when they are the gods of it.
edit on 18-12-2016 by IgnoranceIsntBlisss because: (no reason given)

When Arrowsmith 35 went down in Afghanistan on Dec 17 2013 they lied about it too.

CNN went and reported a bunch of over dramatic crap that never happened.

I don't know what the point is to lie about such things. Families deserve the truth.

Oh yeah, how could I forget Pat Tillman?!?!

Before the families were informed CNN released a bunch of false information about the attack on AS35. They are ratings whores who deserve the worst things to happen to them.

posted on Dec, 18 2016 @ 07:49 PM
link
They couldn't very well admit they utilized so many resources on a "pass around girl" from the barracks could they?

It's a swiftboat operation. She is the future Congresswoman and will use her POW status as a campaign slogan. Bet on it.

I remember hearing the rumors about all that nonsense when we were there. No one had any real info so it was mostly jokes about women drivers getting lost. My unit made it up to Nasiriyah around April 5th or so and it was already over.

We didn't encounter any resistance. Though we hit a back hoe with an AT-4 one night thinking it was a tank. They gave us NVGs after that.
edit on 18-12-2016 by watchitburn because: (no reason given)

posted on Dec, 18 2016 @ 08:18 PM
link
In other news, the "Battle of Bunker Hill" didn't take place on Bunker Hill. It was Breed's Hill. The Roswell crash was an alien spaceship (or something) and not a weather balloon, and William Randolph Hearst blew up the USS Maine. 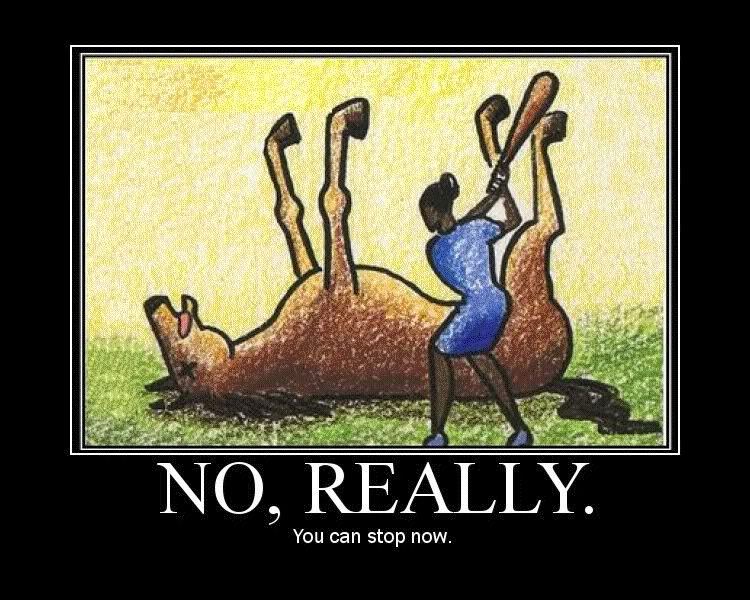 Maybe not so much fake news as just a desperate smokescreen.

Not sure why the link isn't working. Search 'joe vialls battle of baghdad' to find it.

The Battle of Baghdad started that night when the 3/7 Cavalry was engaged by Iraqi forces at the Baghdad airport. I immediately knew they had covered up. There are 20 different indicators I put on the introduction of my website of why I knew it was being covered up, all of which I picked up as you would in your own area expertise if you knew something was being covered up. The biggest clue was Jessica Lynch. The media covered up the biggest U.S. battle in decades by contriving a human interest story. The Jessica Lynch story lasted until the Army had taken Baghdad and they were ready to pull down the statue of Saddam. It was a total propaganda job.”

Capt May: At the end of it all, with the U.S. forces running low on ammo, somebody from somewhere gave authorization to use a neutron warhead over the Baghdad Airport . Now I got this multi-source through Army people who were there, Marine people who were there, and Arab journalists who were there or who talked to people who were there. The important thing is that the American boys did not know what had happened. They were never --the details were never filled in. But what happened was the American forces went and buttoned up inside their armored vehicles. Armored vehicles have pretty good protection against radioactive transmission. They have a good transmission factor, it is called in professional terms.

Capt May: Since they were inside and buttoned up, the Iraqis were outside and exposed, and the way I got it from the Iraqi side through Arab journalists, was they thought they were doing good until all of a sudden they started melting. So at that point a nuke went off over Baghdad Airport , maybe a series of nukes. And we think neutron is enhanced radiation, as I am sure you know Mr. Turner.

Turner: Yes, I am aware of that. But it wasn't a fission device, it wasn't the big bang, it was a neutron warhead.


excellent case to drive home the point you're making S&F!

But I can say with total certainty that we didn't have enough armored vehicles to hold all the US servicemen there.

Add in that the information on casualties does not support it either, and I am perfectly comfortable saying that the Capt May in your source is full of s**t.

originally posted by: watchitburn
a reply to: Kester

But I can say with total certainty that we didn't have enough armored vehicles to hold all the US servicemen there.

Add in that the information on casualties does not support it either, and I am perfectly comfortable saying that the Capt May in your source is full of s**t.


A workfriend was a Ranger at the airport. He laughed at the fact that when Bagdad Bob was on the news saying the Americans are not coming you could hear the Rangers gunfire at the airport in the background.