posted on Dec, 15 2016 @ 05:58 PM
link
I did some research into the minds of the creative while standing on the shoulders of a Hungarian Psychologist named Mihaly Csikszentmihhalyi and his work on flow or the so called "Zone".
It was a truly enlightening work that anyone should actually take the time to read.

I did some cross references into other fields of expertise, to see why they fail more often than succeed, and the common factor is;" The Creative Persona is a drug addict ". 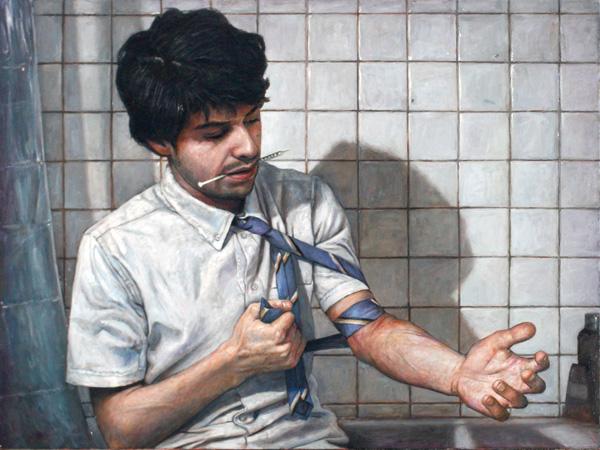 Etymology
The word aesthetic is derived from the Greek αἰσθητικός (aisthetikos, meaning "esthetic, sensitive, sentient, pertaining to sense perception"), which in turn was derived from αἰσθάνομαι (aisthanomai, meaning "I perceive, feel, sense")

One crucial element with Aesthetics is that its very subjective, it gives a "creative persona" an environment of self exploring and a journey, however you also create an environment that is hazardous.

A work of art has a higher value if it comes along with a "uniqe and tragic story" or with a "character".
The unfortunate event is that a certain type of people are all to often parasitic towards their nature and creation to fill their own simple place with a higher purpose and meaning.

Offer an addict money and he will use it to fill that simple need, and a drug addict finds ways to fund their drug habits.

It’s no secret that drug addiction can drive people to do things that are completely out of character. When addiction takes hold, scoring drugs to avoid withdrawals is a 24/7 job. And there’s no glamour in that kind of career path. Little girls certainly don’t dream of becoming prostitutes who trade sex for crack rocks. And you’ll never find a little boy who’s eager to pursue a life of crime as a way to fund his heroin habit.

While it’s common to hear of addicts turning to prostitution, burglary, and car theft as a way to earn drug money, thousands find alternate funding routes. Some of these “jobs” are legal; some aren’t. Legalities aside, there’s no denying that addiction can make people do crazy things. [....]

Aesthetics is for the artist as Ornithology is for the birds.
— Barnett Newman

How addiction changes our brains

Experiments on mice show that drug abuse leads to permanent changes in the brain. Meet one of the scientists who is trying to reverse this damage and treat addictive behaviour.

Addiction in the Brain

More people want to see you fail rather than succeed, its in our simple nature. Fills in one of the "Seven Deadly Sins" called "Envy".
But an inheritance from a strong character of a mother figure, the lack of funds and a curious mind with a confined space, will have a higher possibility to shine.
--

posted on Dec, 15 2016 @ 07:45 PM
link
Argh, that poor mouse! If I had my head shaved, electrodes shoved into the remaining gray-matter residing in my skull, and wires trailing out the top of my head to some device, I would be madly clicking the button for relief, too! Don't we have enough evidence of how drugs (INCLUDING ALCOHOL) affect the brains of those who chronically abuse them without torturing animals?

I'm going to spend more time with this. I appreciate the topic but I'm not sure I follow what you've laid out completely.

I watched the videos but haven't had a chance to read through everything you've cited, but one thing caught my eye.

The wiring in the grey goo can change but the reptilian cortex ( instincts ) stays the same, survival.

I've almost exhausted my knowledge on the subject here, but this does pose an interesting question. The reptilian level of brain management (medulla, pons, and midbrain) are responsible for survival, but during addiction, isn't maintaining the addiction by getting and taking drugs part of survival? I wonder what it all means.

And all this neglects to account for social influences, which must be at least as important as neurological influences. It's a fascinating world to explore. Personally, I'm in it to try and learn something about how I "tick" as a creative person.
edit on 15-12-2016 by MiddleInitial because: (no reason given)

i need to look into that

posted on Dec, 16 2016 @ 06:46 AM
link
I've long been in the understanding that A: Just about anything can be taken to addiction levels equatable to drug addiction and B: Every single person is an addict about something.

The most common is people's addiction to other people. Often under the guise of "love", people will do anything to be with another. Frequently, the choice is a bad one as there is no shortage of unhealthy relationships out there. Many cannot seem to deal with being alone.

But addiction comes in all forms:

Money
Working
Food
Shopping
Gaming(my own, also known as escapism, like any addiction)
Religion
Health
Social connection
Attention
Control
And even, of course, frequenting sites such as this one

Addiction is a fascinating feature of humanity and simply no one is exempt from it in some form although I suspect smaller 3rd world tribal societies don't suffer from it as much. It has to do with our society. This has been proven in some experiments like Rat Park where given a haven-like environment, obsession with filling some void is lessened at least. I don't think anyone considers this mess we've made to be a haven-like society for humans.

Gaming is a substitute for intimacy or the lack of

I gotta say "Hardly" to that one. I'd much rather save a virtual princess than hear one who thinks she is one whine on about her nails.

Heh. And I'm going to continue playing a lifetime of video games. It's a first you know. Humans have been banging incessantly for millenia. Been done. Sooo mammalian.