The Lost Bones of Thomas Paine Tom Paine wrote the words that set fires burning in the minds of men. These were the flames of revolution, liberty and the hopes that all people would be equal under fair laws, fair pay and free of the rule of kings. ‘The Father of the American Revolution’ became one of those historical charismatics – the lightning rod. His name was known across the Eastern seaboard of the Americas and across Europe as he became the burning torch of Liberty.

Like a flame, he burned brightly and was ultimately dowsed and drowned by religious intolerance – cast down as an atheist. Relegated to the status of heretic by his Quaker community, he died, dirt poor, in obscurity on a farm outside of Greenwich Village in June 1809. Only six people attended the funeral; a Quaker minister, a woman and her two children and two ex-slaves who had walked 25 miles to bear witness.

Perhaps he trimmed his sails according to the prevailing winds of the time? Although he was rejected, by some, as an atheist, his early writings attested to a belief in ‘one God’ and rejected the religions that sought to control the expressions of Faith.

Once hailed as the "father of American Independence," his friendship cherished by the great figures of the Revolution—Washington, Jefferson, Samuel Adams, Lafayette, and many others—he spent his last days in obscure poverty, shunned by his former friends and reviled by his enemies as an atheist! He was denied the right to vote because he was not a citizen. The government refused him the paltry pension which he had been promised. And finally, when he realized that death was approaching and he asked to be buried in the Quaker cemetery at New Rochelle, New York, even this request was denied.

Peter Porcupine and the Bones of Thomas Paine (pdf)


Ten years after his passing, an old rival, William Cobbett (an Alex Jones predecessor), arranged for a grave robber to disinter the remains and ship them to England. His views had altered with the passage of time and he hoped to see Paine being buried, with respects, and a great statue being erected in his honour.

Paine’s life was a series of unlikely events and even his bones would continue the pattern of unpredictability. Cobbett’s ambitions drew the same attention as poor Tom’s funeral with not enough people caring enough to give monies. The anonymity of the Greenwich grave was nothing compared to his next resting place – he was boxed up and left in an attic.

From this point, history is as obscure and inscrutable as it often is; the bones have become the stuff of rumours and myth. Where are they? Nobody can say for sure. History has a habit of striking the chord of irony and so it became for Paine. The bones of the man whose writings changed the path of human history and challenged religious dogmas were allegedly sold as trinkets. Legend has it that some were made into buttons and the rest are lost in time. Even his headstone has gone:

"After Cobbett violated the grave, and removed the bones from the remains of Paine, the headstone as broken, and pieces successively removed by different visitors; one large fragment was preserved by a lady in an opposite cottage, in which Mr. Paine had sometimes boarded; but this fragment gradually suffered diminution, as successive visitors begged a piece of what they could no longer steal. To preserve the last remnant the lady has had it plastered up in a wall."

The Adventures of Thomas Paine's Bones by Moncure Conway

His skull is reported to be in Australia and held by a family who claim to be descendants. So far, there’s no definitive evidence to confirm it’s his.

Paine’s bones are lost and his influence lives on. Given what is known of the man, I like to think he would have appreciated the humour. After all, won’t all of us fade into anonymity? The only legacy we leave is what remains in the minds of the living.

posted on Dec, 11 2016 @ 02:53 PM
link
a reply to: Kandinsky
Perhaps he should have done a Jeremy Bentham and bequeathed his body to be on public display. Then there would have been no argument.

Paine was a great man who didn't get the honor he deserved during his life. Most interesting is that two ex-slaves walked 25 miles to attend his funeral. Was it he that gave the two slaves their freedom? If so, it shows the great character of the man.
I haven't read the PDF but i will. 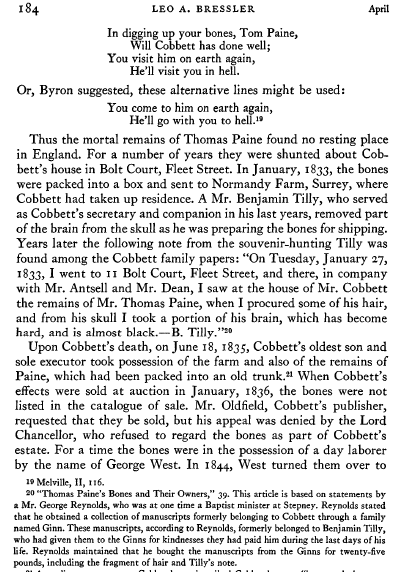 Cobbett's idealism seemed detached from social conventions. Selling relics of grave-robbed goods would be a no-no even to those who admired Paine's writings. His son scratched the Cobbett name on the skull to show provenance.

It's like a thought experiment. Would you choose an anonymous death and historical recognition over celebrity and adulation in this life?

He died alone and his missing bones are somehow symbolic of the importance of ideas over material things.

I was aiming at something else when I wrote the OP and lost the way. It happens!

posted on Dec, 11 2016 @ 05:48 PM
link
Hell, you read Paine today and it's far more captivating than anything like Das Kapital or suchlike.

He nailed the flaws of the system of government at the time perfectly.

atheist do not believe in god.

Deist believe in god.
What they don't believe in is the corruption/ control of organised/institutional religion.
www.god-and-country.info...
definition of religion: "Religion is an organized collection of beliefs, cultural systems, and world views that relate humanity to the supernatural, to spirituality and, sometimes, to moral values."

As a religion, Deism, without an attributed morality or a set of dogma/observances, is about as minimalistic as a supernatural deity based religion one can get, but under the definition present above, it still qualifies.

The incredulity, with which a reasoning person approaches the matter of Paines death, and the subsequent treatment of his mortal remains, cannot be understated. Who would have thought that a man who helped revolutions flourish on not one, but two continents in what we, today would probably call a short life, would wind up not simply loathed, as a criminal or as a traitor, or as a monster even, but simply ignored?

One of the most influential figures on the world stage, and yet shunned at the grave side, despite having called the forefathers of a nation his compatriots, despite having helped deliver two nations from the coil of tyranny and oppression.

Even his written works alone should have made this mans funeral the most attended, his death the most mourned, his wake a party of legend and myth, but no. Derided in death, after being shunned in life! You could scarcely credit it! This might not be a popular thing to say, and no doubt some will take great issue with what I am about to suggest, but I feel it is wise to try and contemporise this situation, the better to grasp the sheer magnitude of it. In order to do so, I will use two modern examples of people who rock the boat as a matter of necessity and believe in freedom so broadly and unashamedly, that they put themselves in danger of prosecution or worse to state their case for it.

If Julian Assange, or Edward Snowden, two men who have sacrificed an awful lot to give freedom back its wings, were to die tomorrow, their funerals would not, unless some EXTREME funny business were afoot, be some of the most extensively attended affairs you could hope to witness, and if not the services themselves, then the processions preceding those events. Those who believe that freedom should be more than a carrot, swung before a population to make them work, would be unable to ignore those men, no matter what one might personally think of them, because these men have shown utter dedication and firm belief in the principle behind freedom, liberty, and justice as a pure concept, as a more advanced and perfect concept than the law.

They would not go unmourned.

What can have happened, between Paine and his contemporaries, that he could have died in such inauspicious surroundings, that he could have lived the last years of his life as bitterly lonely as he must surely have done, without the support or camaraderie of those who lead the nation his words helped give birth to?

I for one find it very sad.

Might I leave you with some quotes to go with your posting.

“He who dares not offend cannot be honest”. Thomas Paine

A long habit of not thinking a thing wrong gives it a superficial appearance of being right. Thomas Paine

"Titles are but nicknames, and every nickname is a title." — Thomas Paine

I'm torn between different perspectives. A man of such positive influence should have been suitably buried and it could be pointed out there are mausoleums full of historical nobodies. Westminster Abbey stores the bones of lesser personages and people have been sainted for less.

On the other hand, what are our bones worth and is the measure of man determined by the extent of his tomb or the height of a statue?

Devil's advocate...maybe it's more fitting for the ideas to have immortality even though their vessel has been broken and cast to the four corners.

His quotes were cans of whoopass to his peers and must have stung many.

This one defines a lot of the current political discussions imo:

“Whatever is my right as a man is also the right of another; and it becomes my duty to guarantee as well as to possess.” ― Thomas Paine, Rights of Man

One more for the road (clink); idealism and a goal:

“When it can be said by any country in the world, my poor are happy, neither ignorance nor distress is to be found among them, my jails are empty of prisoners, my streets of beggars, the aged are not in want, the taxes are not oppressive, the rational world is my friend because I am the friend of happiness. When these things can be said, then may that country boast its constitution and government. Independence is my happiness, the world is my country and my religion is to do good.”
― Thomas Paine, Rights of Man

I wholeheartedly agree. And whoopassed i'm sure they were

Thank you for that, truer words from a good Man of stature were never spoken during his time.