Worked Detroit for a while...crazy stuff

posted on Dec, 9 2016 @ 11:13 PM
link
Worked a "steam" job in Detroit once. Got stationed there. We were replacing old steam lines in central Detroit. Some of these lines were wooden lines from the late 1800's. It was a crazy job. Never saw as much crime as we did on that job. People would steal anything...absolutely "ANYTHING"

It was a shame. I would go out in the morning and the radio would be "singing" about stuff which got stolen...every night...on the way in to work in the morning at about 5am. They stole everything...just everything. It was unimaginable. I have no idea how they sold the stuff they stole, but I'm sure they did. We had heavy equipment (Cats and big gear...they'd steal everything imaginable).

We worked the job for years, replacing the steam lines and supplying heat to the people of Detroit. It was a good, but hard, job.

One night, I got a call...they (Detroit PD) found the bulldozer, the "D-8". It was down a street they wouldn't go down...a "crack" street. It was parked between two houses. My job was to go get it.

I had two of our low-boys standing by, and a big winch truck. It was scary. Every other house was burned out. It was sad really. Beautiful old Victorian homes, just burned out shells. We came down the street in force, I could see the crack-heads looking out the windows. Amazingly one of our mechanics actually got that dozer started.

This older gentleman came out as we were loading it. At first he was saying "I had nothing to do with this, but I saw it...and it's been sitting there for several months". He was a nice old guy. This Caterpillar D-8 bulldozer had been parked next to his house for months...over 3 miles from where it was stolen from. He was skeered. We came with big recovery equipment, big winch trucks, heavy haul tractors...lots of flashing lights, mechanic trucks, oilers...(shaking head). At the end of the day it was sad really.

We recovered that bulldozer. I don't know why anyone stole it, or what they thought they would be able to do with it . The irony was, three days before we recovered it the insurance company paid it off. It never even made it off the trailer before going to the auction yard.

And that, my friends, is a true story.

posted on Dec, 9 2016 @ 11:33 PM
link
Learned that lesson myself. New Orleans, Katrina. It did not matter if it was chained or bolted down. They would steal it. Stole a couple of industrial lights sets and Bobcat from us. And every flooded house, they were gutting all the copper wire and AC units for the copper lines. Didn't even care about the contents except some meth heads taking jars of change they found. Just sad the depravity of people. There was plenty of free food,water and shelter even medical help for about 8 months.

I mean, can you imagine stealing a Caterpillar D-8???? There's no way they could have hauled it. They must have hot-wired it and drove it down the street...for 3 miles!!

On the other hand, stealing an 85,000 lb. piece of iron is a WHOLE different matter!! And making it "disappear" for over a year is simply amazing!! 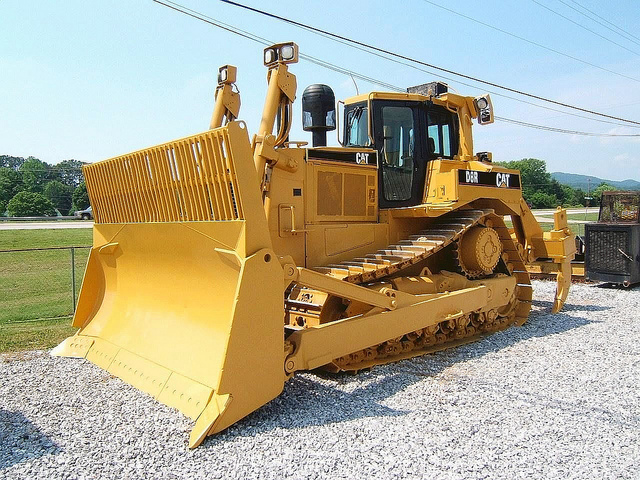 How did they know how to drive it?

Why didn't they crush some cars with it?

Dude I bet that thing would chatter the teeth of people standing in their living rooms as it drove by. How the hell did they get away with that?

The old guy who came out that day said it rattled his windows and shook his entire house, but they pretty much kept their blinds closed and didn't look out after dark.

He said he saw it sit there for months, but thought it was part of some job. They drove it right down the street. It just sat there collecting dust and moss between those houses.

These people are just terrified in their homes. They ignore everything, else they get burned out.

How they knew how to drive it (and hot-wire it) I have no idea, but I've seen weirder stuff!

posted on Dec, 10 2016 @ 01:53 AM
link
The insurance company paid up a few days before it was found and available to be auctioned off?

Honestly, I wondered about that also, but my job at the time wasn't to "think". My job was to follow directions.

It was an Italian company...so I could believe anything.


It was an Italian company...so I could believe anything.

Anyway, if that was the case, posting it wouldn't be wise. But I don't think they would leave it in the streets neither.

posted on Dec, 10 2016 @ 03:42 AM
link
I didn't realize how big it was, thought it was like a D 7 dozer. I bet the neighbor guy you spoke with saw the driver if it shook his house. Who would not take a look if your house was shaking. I get that he keeps his blinds shut and minds his business but come on, your house is shaking!

If it is a local somebody had some experience, likely a fired construction worker.

Sorry, but whenever someone mentions again that Merkel did call upon us the "Great Plague", I might do a reference to this thread.

Because it seems that there are real no-go-areas in civilized countries. I haven't seen one here, but that seems to be only me, not the newspages like infowars etc..

Yeah, I grew up in Detroit. Back in the late 80's I use to rent storefronts for rock bands to rehearse in. It was just about 5 blocks south of the Pointes in a really cool art deco building, actually featured in a history magazine. Hookers, drug dealers, low life's were all around that neighborhood. Half the time the signal and street lights were out at night. If I had to walk out of there, that first 5 blocks was the worst threat.

During the day, if you walked to the nearest store the cops would harass you because you were white and they thought you were kids from Gross Pointe there for the drugs. But that never stopped the meter maid from ticketing your car on the street in front of the stores, until we smashed the meters. It's a good thing we were so crazy back then, we did get some respect from the locals. We had to look out for ourselves as the police would take an hour to answer a call if they came at all.

We never got shot at though and were actually treated pretty well for such a bad neighborhood. Once a box of hand tools got stolen from the front door area when we were loading stuff in. Another time they broke a window trying to smash a video camera we used to watch the cars. One band got their van broken into because it was parked just back away from the store front lights. But we had people there all hours, a few guys actually lived there for awhile. Ultimately the worst thing that happened was a brawl due to some gambling gone bad at one of our parties. We all beat the crap out of each other. It wasn't long after that we closed up business. It lasted about two years before that.

No, not really. It just means all sorts of crazy stuff happened.

What year was this?

It sounded a little like some of NYC in the 70's.

Yeah stealing is bad, but I would not come down so hard on the people. Its a bad situation.

Its probably easier to start than a modern car. Maybe some kids did it for kicks.

posted on Dec, 10 2016 @ 08:58 AM
link
Im honestly surprised the tracks didnt destroy the asphalt as they drove it away. Even at our shop when we get bigger tracks machines if you turn too hard it just eats the asphalt right up.

Yep, big dozers like that will definitely leave grouser marks in the pavement, but it had been over a year. We did see some right by where it was parked, were they turned to get into the lot, but other than that there was nothing really. It was an old dozer at the time with some pretty worn tracks, but still I expected to see more.

We don't think they drove it the whole way there, it would have attracted too much attention. They must have loaded it onto something and hauled it at least part of the way.