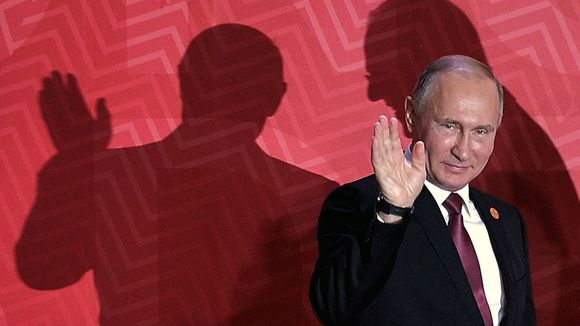 In a story published about an hour ago on The Washington Post's website — citing "officials briefed on the matter" — it's being reported that the CIA briefed Congressional leaders last week and in their assessment, the CIA has concluded that not only were agents of the Russian government behind the DNC emails hacks but that the primary purpose was to influence the election in favor of President-elect Trump.

Furthermore, the authors' sources state that this was the latest closed-door briefing in a series of briefings going back to September and that a bipartisan "gang of 12" was convened by the Obama administration to evaulate the intelligence reports and give their advice as to whether the administration should formally name the Russians as the responsible party.

Intelligence agencies have identified individuals with connections to the Russian government who provided WikiLeaks with thousands of hacked emails from the Democratic National Committee and others, including Hillary Clinton’s campaign chairman, according to U.S. officials. Those officials described the individuals as actors known to the intelligence community and part of a wider Russian operation to boost Trump and hurt Clinton’s chances.

“It is the assessment of the intelligence community that Russia’s goal here was to favor one candidate over the other, to help Trump get elected,” said a senior U.S. official briefed on an intelligence presentation made to U.S. senators. “That’s the consensus view.”

The CIA shared its latest assessment with key senators in a closed-door briefing on Capitol Hill last week, in which agency officials cited a growing body of intelligence from multiple sources. Agency briefers told the senators it was now “quite clear” that electing Trump was Russia’s goal, according to the officials, who spoke on the condition of anonymity to discuss intelligence matters.

The CIA presentation to senators about Russia’s intentions fell short of a formal U.S. assessment produced by all 17 intelligence agencies. A senior U.S. official said there were minor disagreements among intelligence officials about the agency’s assessment, in part because some questions remain unanswered.

For example, intelligence agencies do not have specific intelligence showing officials in the Kremlin “directing” the identified individuals to pass the Democratic emails to WikiLeaks, a second senior U.S. official said. Those actors, according to the official, were “one step” removed from the Russian government, rather than government employees. Moscow has in the past used middlemen to participate in sensitive intelligence operations so it has plausible deniability.

The Democrats were unanimous in their opinion that the White House should act, there was a split among the Republicans with at least two of them opposing any effort to name Russia — one of them being Mitch McConnell.

According to several officials, McConnell raised doubts about the underlying intelligence and made clear to the administration that he would consider any effort by the White House to challenge the Russians publicly an act of partisan politics.

Some of the Republicans in the briefing also seemed opposed to the idea of going public with such explosive allegations in the final stages of an election, a move that they argued would only rattle public confidence and play into Moscow’s hands.

McConnell’s office did not respond to a request for comment. After the election, Trump chose McConnell’s wife, Elaine Chao, as his nominee for transportation secretary.

The article also quotes Nunes, who I believe it would be safe to assume was likely a part of any secret briefings, calling the evidence circumstantial:

Some key Republican lawmakers have continued to question the quality of evidence supporting Russian involvement.

“I’ll be the first one to come out and point at Russia if there’s clear evidence, but there is no clear evidence — even now,” said Rep. Devin Nunes (R-Calif.), the chairman of the House Intelligence Committee and a member of the Trump transition team. “There’s a lot of innuendo, lots of circumstantial evidence, that’s it.”

It would seem that Democrats in Congress aren't thrilled with President Obama's response and that it's portions of the latest CIA assessment that seven Democratic Congressmen are urging the administration to release to the public.

So we've got three WaPo journalists on the byline and they're claiming multiple sources. The White House and CIA declined to comment, President-elect Trump's transition team and Senate Republican Leader Mitch McConnell's office didn't respond to requests for comments. They quoted Rep. Adam Schiff (ranking Dem on HIC) though:

I think it's safe to say that this all happened. Should the White House have disregarded dissenting Republicans? The election is over, should we hear what the CIA assessment is? Will the investigation continue under the incoming Trump admin?

Added image to top from related USA Today article because... pictures.
edit on 2016-12-9 by theantediluvian because: (no reason given)

Odd, some sources say the CIA provided the information to Wikileaks.

Why would Washington Post break this story? And also, wouldn't they wait until they decided how to react before sharing this information with the public and therefor Russia?

I'm not discrediting this, as anything is possible. Just staying as skeptical as hearing the CIA leaked some info to Wikileaks which sounds equally as odd.

Anything is weird and possible in my mind. Will wait to draw a conclusion with more info.

originally posted by: theantediluvian
In a story published about an hour ago on The Washington Post's website — citing "officials briefed on the matter" — it's being reported that the CIA briefed Congressional leaders last week and in their assessment, the CIA has concluded that not only were agents of the Russian government behind the DNC emails hacks but that the primary purpose was to influence the election in favor of President-elect Trump.


Ok. So, say the Russians used their tech to influence the US elections in favor of Trump.

How is this any different from what the CIA does in many foreign nations around the world?

Everybody learns from the US, and copies what the US does, because the US is the most successful nation on earth.

If somebody copies you, isn't that a form of flattery?

I would be highly suspicious of a news story that claims to be revealing something secret from within the intelligence community.

John Podesta's email was hacked because he lost his iPhone in DC.

And as per usual, this article is all puff and no substance. What is a 'secret assessment' and why is it ok to talk about it publicly?

This is pure allegation.

posted on Dec, 9 2016 @ 09:02 PM
link
Real world leaders that haven't lived in a money bubble all their lives can see Trump coming a mile away. The ego of Trump that he's praised for will be his downfall, as it always invariably is. The ego is the easiest thing to use against somebody.

How serious are you expected to take a president that tweets his ideas instead of having a press conference? Trump delegitimizes the office of the president just by how he chooses to convey himself.

I doubt this is lost on savvy foreign leaders. And it will be used against us given the chance.

Can't say your right or wrong.

I can say, be leery. This has been the new narrative and its evidence is scarce.

schuyler
+7 more
posted on Dec, 9 2016 @ 09:04 PM
link
Wikileaks disagrees. And the fact that the Washington Post says something is reason enough to doubt it. Having said that, it;s a reasonable position for Russia to take. Hillary's antipathy to Russia has nearly gotten us into it. Trump can look at Putin mano-a-mano and say "Look, let's chill and work this out. ISIS is our mutual enemy." Putin and Russia can work with Trump. Of course they favor him. It's just like when the West favored Gorbachev. I don't blame Russia a bit. They made the right call. But saying they did the hacks is a stretch, especially in view of the fact that Wikileaks said they were done by the CIA.

posted on Dec, 9 2016 @ 09:06 PM
link
The things they discussed in emails should have never been discussed in email. Hillary and her staff should have known but they scoffed at the OPSEC training and ethics training. Just said # it. That training is required by ALL FEDERAL EMPLOYEES. The training is to prevent what happened to them.They thought they were too good for it. Turns out they were WRONG. They needed it more than anyone else.

I have been a Federal employees over 23 years. No way would I ever discuss the things they did. I actually read over every email I send and make sure there is nothing in there that could cause any rift. If I need to discuss something more sensitive I use other channels, never email.

End of the day Hillary, her staff and the DNC are feeble minded when it comes to email. No way around it.

When is Putin up for reelection, or did he do away with elections and crowned himself dictator? If there are still elections in Russia it's time for American internet trolls to do their best to sway that #. Although, if there are elections there I'm sure they are rigged but worth a shot.

The WaPo and NY Times ... just glance back through their pages and re-read ALL their lies. OMFG!!

I could see that just as easily as someone being disgruntled with what's happening leaking it too. Anonymity will keep them safe from persecution.

Where did you come up with John Podesta's email was hacked because he lost his iPhone in DC? What is a "secret assessment?" It would be a CIA assessment (report, briefing, whatever you choose to call it) that was provided to members of Congress in secret, behind closed doors.

It wouldn't be okay to talk about it publicly. That's why it's a leak from unnamed sources.

I know there's a lot of worship for Trump but his election isn't some new chapter in reality before which anything that occurred has lost all relevance. Wanton partisanship doesn't change objective reality. If it can be proven within a reasonable doubt that the Russian government was behind either the DNC or Podesta hacks — or both — during the US Presidential election, then it will most likely fall on the incoming administration to determine what the appropriate response will be.

Unlike Khrushchev, you do not want to bury us. You have other things in mind. We will see in the near future what you want from us.


Oh yeah. Because they couldn't be lying or working some type of long game.

Wait till the CIA tells you. Seems legit.
edit on 9-12-2016 by underwerks because: (no reason given)

It will not keep them safe from anything if the journalists are subpoenaed and refuse to reveal their sources. They can be held in contempt and jailed for not doing so.

posted on Dec, 9 2016 @ 09:13 PM
link
While I would not be surprised if this was completely true and it raises even more suspicions due to the ties Trump and his campaign already have with Russia, I think we need to wait to see what happens next.

If it's true and the Trump WH squashes the investigation, I have no doubt we will hear about it quickly.