President Barack Obama has ordered a "full review" before he leaves office of the cyberattacks that plagued this year’s presidential election, a top White House official said Friday.

The announcement by Lisa Monaco, Obama’s counterterrorism and homeland security adviser, follows repeated demands from congressional Democrats for more information about the digital assault that the Obama administration has blamed on Russia.

I’m not looking to start a war, but considering the way people converse about politics on here and to prevent this thread from closing prematurely, it went into the Mud-Pit.

After Stein recently failed in her attempt to uncover evidence of fraud or manipulate the electoral process, "General Obama" now has to step in and put his stink on it. Look out!

"We may be crossed into a new threshold and it is incumbent upon us to take stock of that, to review, to conduct some after-action, to understand what this means, what has happened and to impart those lessons learned," Monaco told reporters at a breakfast arranged by the Christian Science Monitor.


Sounds like a bunch of bananas if you ask me. Obama’s counter-terrorism and homeland security adviser would not say whether the findings of the review would be made public, but you can bet that if anything was found to undermine Trump’s path to presidency, it will be shouted from the highest rooftop. Currently, only Congress and “a range of stakeholders,” will have access to the results.

The Obama administration in early October accused the Russian government of directing a digital campaign to disrupt the U.S. election. As part of this effort, U.S. officials said Moscow-backed hackers infiltrated the Democratic National Committee, the Democratic Congressional Campaign Committee and other political organizations.

Emails and documents from some of these groups ended up leaking online through WikiLeaks and other suspicious websites and hackers that researchers alleged were fronts for Russian intelligence services.


Correct me if I’m wrong, but the only poor and barely substantiated example of "influence" during the election was the increase in “fake news" websites and the people's inability to decide fact from fiction. If the public was fooled that easily (not surprised), just imagine what else they've been led to believe by their own government and their fake, "State sponsored" sources of information.

At Friday’s event, Monaco struck an ominous tone about internet-related dangers, calling them among the most significant national security issues facing the new administration. President-elect Donald Trump’s team will "inherit a rapidly growing threat in this space across all dimensions," she said, including intrusions from both "hacktivists" and "criminal actors."


I also thought Russia had been cleared of having any involvement with Assange and helping WikiLeaks produce material. This has been discussed here on ATS. Trump, at the moment, seems to agree.

This part I don’t understand…

The president-elect’s ongoing denial of Russian involvement may have, in part, spurred Obama to act. Administration officials told NBC News that “Obama is concerned that Russia will go unpunished for the behavior unless he acts.”


Both Feinstein and Schiff had this to say months ago. Their sentiments have now been met with support from one of the highest-ranking Democratic leaders, kicking this whole thing into overdrive.

“Based on briefings we have received, we have concluded that the Russian intelligence agencies are making a serious and concerted effort to influence the U.S. election,” the pair said in a statement.


Right now, it’s one big storm in a teacup and the Democrats are not backing down, even with Stein's last attempt to uncover evidence of wrongdoing. The support is growing...

The chorus for action ebbed and flowed over the last few months, with Democrats calling on GOP congressional leaders to launch various probes into the Kremlin’s involvement and on the White House to share with the public how it reached its conclusion.

But the campaign surged back into the spotlight this week, when House Minority Whip Steny Hoyer and the highest-ranking Democrats on several national security-focused House committees sent a letter to Obama asking for administration officials to brief all members of Congress on Russian efforts to influence the election.

A spokeswoman for House Minority Leader Nancy Pelosi (D-Calif.) on Friday said the White House review "complements the efforts of House Democrats," which also includes a bill from Reps. Elijah Cummings (D-Md.) and Eric Swalwell (D-Calif.) that would create an independent commission to study the election hacks.


For what it’s worth, some Republicans are joining the party...

In addition to the Democratic pressure campaign, several Republican committee and subcommittee chairmen have promised to hold hearings on the cyberattacks.


And if all of that wasn't enough, Obama is looking to wrap up his presidency by enacting policy that will intend to keep America safe from cyber-terrorism in the future. Great, because tweaking our own electoral process and upgrading the equipment used is pointless. As long as the hack originates from inside the US and not from an unexpected or unmanageable "third party," it's all good.

“More than that, the administration must begin to take steps to respond forcefully to this blatant cyber meddling, and work with our allies in Europe who have been targets of similar attacks to impose costs on the Kremlin," Schiff added. "If we do not, we can expect to see a lot more of this in the near future."


If the meddling is so blatant, where's the evidence?

Anyway, I thought ATS would appreciate the update. I think it's going to get really bad before it potentially gets better or even worse, stays bad. Lets hope for the best and prepare for the worst.

posted on Dec, 9 2016 @ 02:06 PM
link
Hey why not, it's not like the election is over or our country is in extreme debt. Thanks once again and hopefully the last time for continuing to run up the national debt and waste everyone's time.

He should just go hit the golf courses until Trump gets in office. He knows us taxpayers will foot the bill.

As much as the US interferes in other countries elections, I find it highly hypocritical that so much butthurt is being expended towards a nation that may have interfered with ours.

News headlines from the main page of each source:


One of these 6 is different than the other 5...can you guess which one? a reply to: eisegesis

posted on Dec, 9 2016 @ 02:10 PM
link
We all know it's rigged. Very, very, very rigged, believe me. That's what people tell me, rigged really and when we find out who the riggers are, it will be amazing, believe me.

Never again will there be such a whiny POTUS... 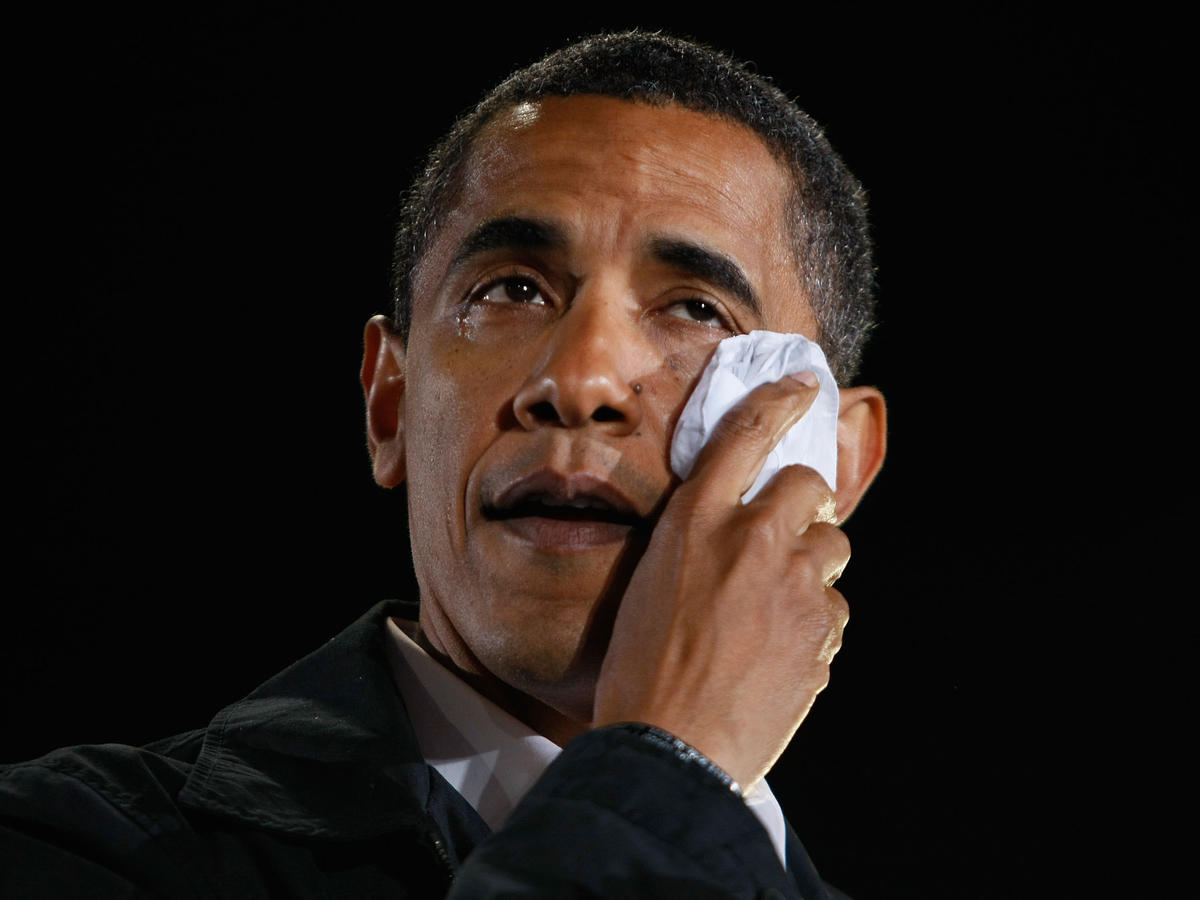 A last ditch effort to start WWIII? He is the only one I have heard of that still hangs on th the theory that Russia hacked the election.

originally posted by: ketsuko
a reply to: eisegesis

That's exactly what this is.

Obama waited until days before the electoral college vote to do this.
Just enough time to solidify the doubts in the minds of people who already were believing the suspicions, but not enough time to be proven false.

He also waited until the failure of Stein's attempts to remove the electoral votes via stalled recounts.

They have not given up.

I find it funny that Trump said the election was rigged and his followers were ready to go to war over it.

I'm so sick of the hypocrisy that this election has brought out in people.
edit on 12/9/2016 by AlbanArthur because: (no reason given)

posted on Dec, 9 2016 @ 02:16 PM
link
Oh yea! This is going to be unbiased. While he's at it, maybe he can investigate the "calibration issue" with the voting machines in Pennsylvania. (one of which I personally witnessed) A true "calibration issue" would have had votes on both sides screwed up, but it was only Trump votes being changed to Clinton. Trust me, if any Clinton votes were changed to Trump, our Leftist media would have shouted it from the rooftops.

originally posted by: AlbanArthur
a reply to: olaru12

I find it funny that when Trump said the election was rigged and his followers were ready to go to war over it.

I'm so sick of the hypocrisy that this election has brought out in people.

Liberals don't go to war...wars have winners and losers...

Democrats engage in quagmires, not wars...

originally posted by: AlbanArthur
a reply to: olaru12

I find it funny that when Trump said the election was rigged and his followers were ready to go to war over it.

I'm so sick of the hypocrisy that this election has brought out in people.


The main focus is not whether or not the election was rigged but the timing of the effort to try to sway electors and/or start a war over baseless accusations.

originally posted by: ketsuko
a reply to: eisegesis


I'm going with an even mixture of both your points. When I saw the news clip the first time, that's exactly what I thought.

Having been away for at least a month, isn't the election over? Aren't people more interested in pizzas, gates and all that other kind of unknowable stuff?

This might help you understand what's going on a bit.

So true lol. I think any president would order an investigation. Mind you this is obama we are talking about he could find a cure for cancer and most on ats would hate him and make stuff up about him.
But trump can do no wrong can he? not release his tax not put his company in a blind trust etc but they don't care they refuse to see his faults.
Pity really we az ats members should be questioning and pointing out his faults but many are blind or willfully ignorant because he said stuff which appeals to them even if it is just smack talk to get in power.
Question them all ATS don't follow blindly like sheep.