Dinosaur Tail Discovered Trapped in Amber is Once in Lifetime Find

page: 1
118
<<   2  3  4 >>
log in
join
share:
EchoesInTime
+69 more
posted on Dec, 8 2016 @ 03:44 PM
link
The amazing specimen was discovered at an Amber Market in Northern Myanmar near the Chinese border. The tail is from a 99 million year old dinosaur known as a young Coelurosaur. They come from the same group as the predatory velociraptors and the tyrannosaurus.

Scientists are touting this a a once in a lifetime find because it is the first time part of a mummified dinosaur skeleton has been discovered. Scientists believe it was chestnut and white. The smallest details are visible and in three dimensions.

McKellar said the creature would have had a whip-like tail like a mouse but covered with contour feathers similar to those that give shape and color to birds. "The more we see these feathered dinosaurs and how widespread the feathers are, things like a scaly velociraptor seem less and less likely and they've become a lot more bird like in the overall view," he said. "They're not quite the Godzilla-style scaly monsters we once thought."

The sparrow-sized creature could have danced in the palm of your hand. The amber, which weighs 6.5 grams, contains bone fragments and feathers, adding to mounting fossil evidence that many dinosaurs sported primitive plumage rather than scales.


It is described as being a sparrow sized creature and i wasn't aware that dinosaurs could be this small.

Ryan McKellar, a paleontologist at the Royal Saskatchwan Museum in Canada said that soft tissue and decayed blood were found within the amber but no genetic material has been preserved. 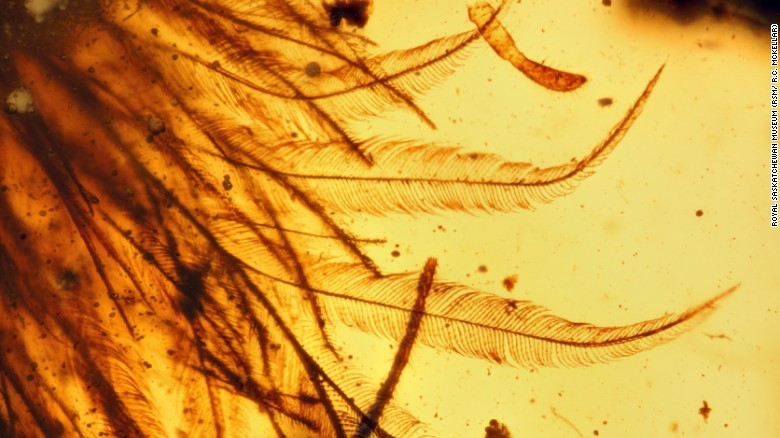 "The new material preserves a tail consisting of eight vertebrae from a juvenile," said Dr Ryan McKellar of the Royal Saskatchewan Museum. "These are surrounded by feathers that are preserved in 3D and with microscopic detail. We can be sure of the source because the vertebrae are not fused into a rod or pygostyle as in modern birds and their closest relatives. "Instead, the tail is long and flexible, with keels of feathers running down each side." It means the feathers are definitely those of a dinosaur and not a prehistoric bird

Jurassic Park here we comes. The DNA was preserved aswell?

(you get the distilled version) 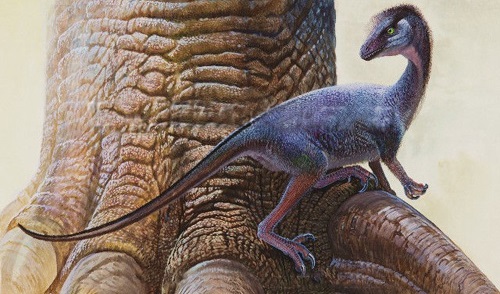 Where they found the piece is both interesting and sad. I'm not sure why such amazing specimens are collected and then sold as jewelry, but the local government must either not be aware or doesn't care to understand their significance.

It was one of more than a dozen amber samples with significant inclusions that were collected by Xing and his research team in 2015 at a well-known amber market in Myitkyina, the capital of Kachin state.

Two of the other samples contained the dinosaur-era bird wings published earlier this summer.


Below is the "dinosaur-era" bird wing that was found at the same time. 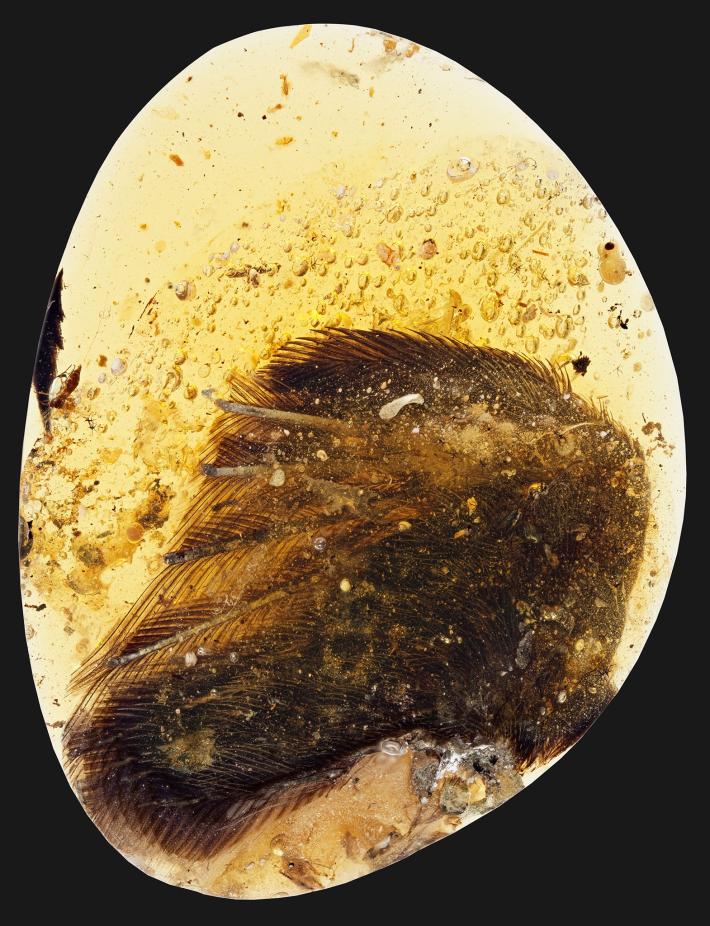 Picture: This nearly 100-million-year-old wing tip features bones, soft tissue, and feathers preserved in amber. It was nicknamed "Angel" because it was originally intended to be used in a pendant called "Angel's Wings." 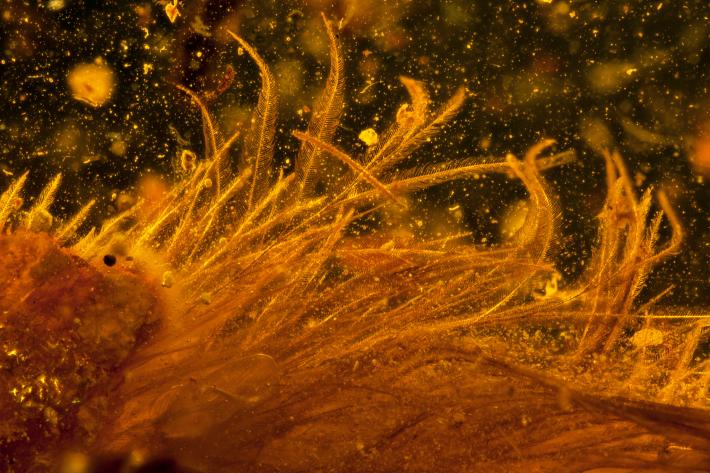 The piece of tail measures 1.4 inches and is covered in delicate feathers. The color is said to be chestnut brown with a pale or white underside.

CT scans and microscopic analysis show eight vertebrae from the middle or end of a long, thin tail. Scientists are guessing that the tail was made up of more than 25 vertebrae.

The majority of Burmese amber is used in jewelry and carvings, and the "Eva" sample had already been subject to shaping by the time it was collected by the researchers.


Makes you wonder what has already been found, shaped and sold. Pieces like this are priceless to researchers, but a novelty to people with money. What a shame. Anyway, good find and great pictures! 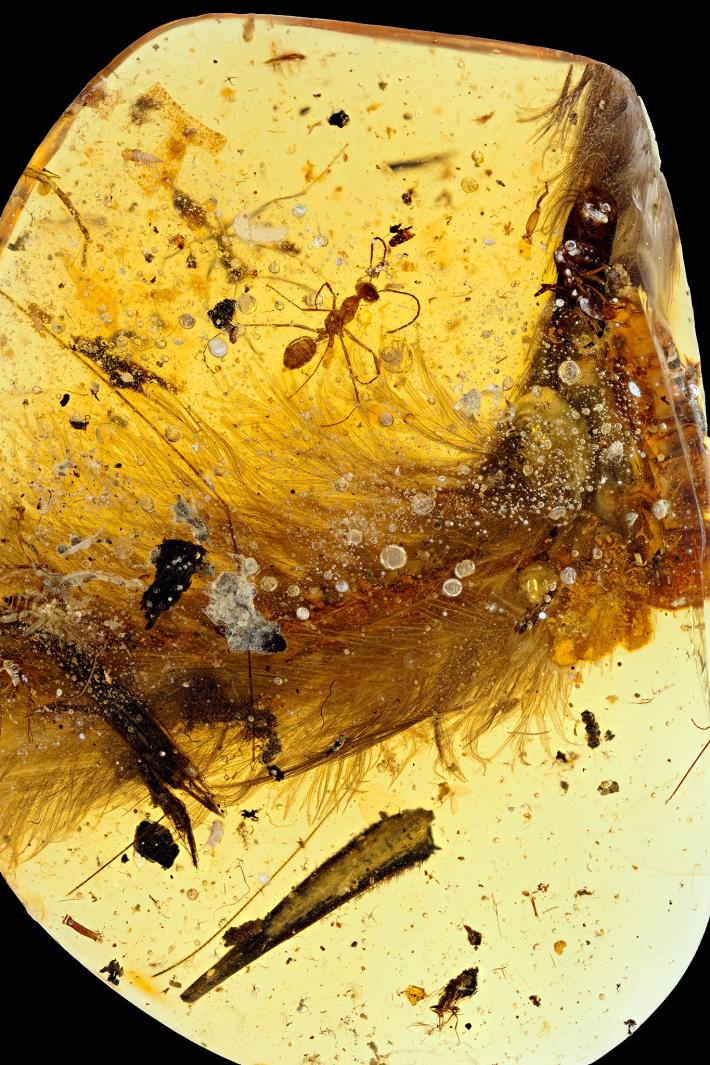 Here are some more fascinating examples that have been found. Don't forget though, dinosaur fossils and similar "hoaxes" were planted on/in the Earth in order to test our faith, lol. 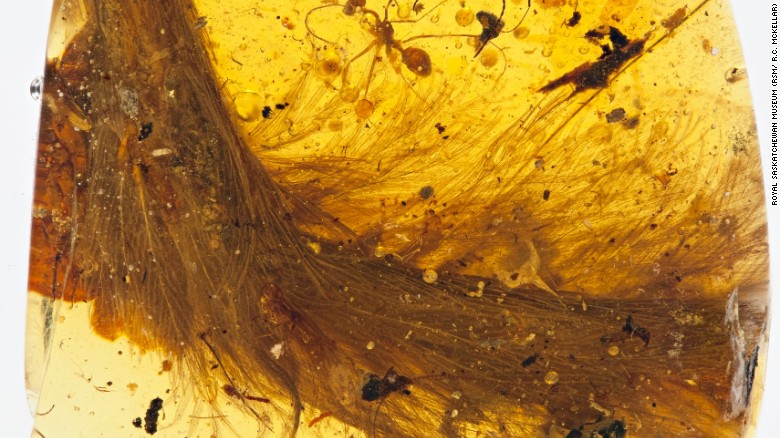 Good detail of the feathers.

posted on Dec, 8 2016 @ 04:01 PM
link
For those that raise multiple species of chickens and other foul....it has been obvious that a great many, if not all Therapods were Thunder Chickens, not thunder lizards. Now Brontosaurus and brachiosaurus, diplodaucus etc...I cant explain those, but therapods like t rex and velos were certainly avian.
edit on 8-12-2016 by BlueJacket because: Sp

The links says that no genetic material was preserved. I'm surprised at that since it was so well preserved.

Is it just me or does it look like a caterpillar or beetle is by it.

I always wondered if the makers of Jurassic Park where inspired by the focusing head movement of chickens, like displayed in the raptor scene where the raptor uses one eye to focus on something. The movement is eerie similar to a chicken, also walking, especially in packs.

But, are we going to ignore the fact that ants have not changed what so ever for almost 100 million years?

Well, crocodiles didn´t change much, too. There are plenty of examples where we think there was not much genetic change.

posted on Dec, 8 2016 @ 04:12 PM
link
yes why are the insects so tiny? i thought pretty much everything was bigger hundreds of millions of years ago???

originally posted by: Arnie123
Whats up with the Ant you think?

I was thinking the same thing, are those prehistoric ants ?

originally posted by: tribal
yes why are the insects so tiny? i thought pretty much everything was bigger hundreds of millions of years ago???

Only certain time periods were they larger, when the oxygen levels were almost to the point where things were igniting in flames sporadically all over the place.
edit on 8-12-2016 by strongfp because: (no reason given)

I have several chickens and ducks. There is absolutely no question in my mind that they are descended from dinosaurs. I know that they're birds, but they are so reptile like. My daughter and I joke about it all the time. Every time we see another article about a feathered dino found, we just look at each other and smile. To us it's obvious. We have an aviary full of little dinosaurs.