posted on Dec, 7 2016 @ 06:10 PM
link
With the stock market headed to the moon, perhaps this is an appropriate timed thread... or maybe premature... I can't time it precisely.

Just in case anyone hasn't heard of the PPT, here is a wiki:
en.wikipedia.org...
I'm not really trying to start a discussion about what the PPT does, I just thought it was a catchy title for my first new thread posted on ATS.

I am trying to show why the stock market should plunge, using 4 simple charts, and basic algebra.

I open with a graph, using data from the USA Bureau of Labor Statistics.

Here is USA's most famous measurement of prices, the Dow Jones Industrial Average, from 1913 to 2010, measuring its percentage change.

In 2009, scouring stock graphs, I saw a strong inverse relationship, between the measure of the USA dollar and stock prices, especially from August 2008 to November 2008.

The following graphs show a measure of the dollar on the top (NYSE: UUP) and stocks on the bottom (NASDAQ) for 2008.

When I see an inverse relationship, I figure it is reasonable to assess a cause and an effect. The assessment that comes to me is: a weak dollar is the cause and higher prices are the effect. Observing the last century, I conclude the relationship is not a perfect match, 1 to 1. Still, I have to start with an assessment.

The first question I have: if the dollar had held the same level of purchasing power, since 1913, what would have happened to stock prices? To calculate this, multiply stock prices of today, by what's left of $1.

Does this mean, if, and only if, the dollar had held its same purchasing power since 1913, the Dow would have only gotten to around $400?

To check an assessment I search for matches.

This first assessment says, the Dow is an accurate measure of 2 things:

What matches this growth rate?

Roughly, population went from around 75 to 300 million.

So, multiply the average Dow prices, by the amount that $1.00 eroded to at each plotted point to adjust for inflation.

Then translate the changes to percentage amounts. Reflecting changes by a degree of percentage shows the graph in clearer perspective. 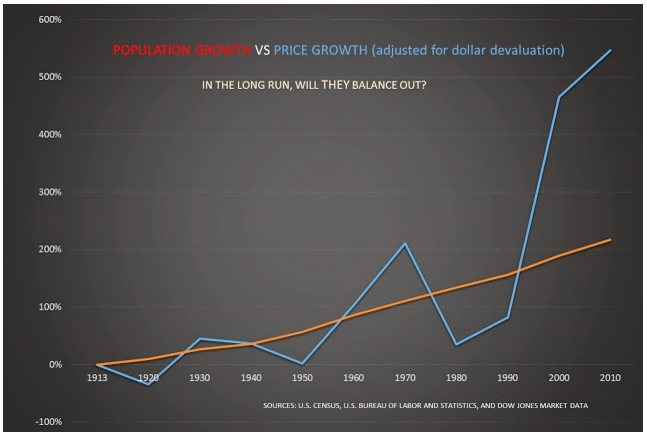 At first, drastic deviations in stock prices from population appear to confound the conclusion. I maintain the belief, that this is a sound expectation, and, though the last 100+ years have been greatly off track, prices and population will eventually align to each other.

Over 10 year intervals, the increases and decreases of prices show as severe, and have drifted far greater or far lesser than population; but prices have eventually been pulled to population. The volatile graph, I compare to perception, and the smooth graph, I compare to actuality. In spite of the volatility, I am certain of the belief: perception will align to actuality.

Now, I express the SHORT-TERM target I compute of the stock-market (our most popular measurement of asset prices).

I follow the Nasdaq more closely than the Dow, so I choose to shift to this broader index at this point, (but the Dow goes further back, and is similar to the Nasdaq, so was used as the initial basis for this thesis).

Then, considering the purchasing power of the dollar:

by 1940, corrective actions had strengthened the dollar to near 0.70;

since then, excessive actions have caused the devaluation of the dollar to 0.04; I am guessing, corrective actions could eventually cause it to increase to 0.12 (an increase of 3 times);

So, if my belief becomes true, and, so to speak, perception (as in prices) can more closely align to actuality (as in population), Nasdaq might align to $352.

That this action will strengthen the dollar’s value from 0.04 to 0.12 I estimate by drawing a typical trend line.

Why should the dollar become strong at this point? Graphs with decelerating losses generally reach a point where they flat line. I believe there will be a nice increase, as the trend levels out.

The dollar currently appears to me as being at a critical inflection point. In all of 2014 it showed strength.

At the end of 2014, it seemed to me as being clear, the major question was not: will the dollar have a major increase in value (when junk loans go sour); but when will this major increase be complete?

posted on Dec, 7 2016 @ 06:22 PM
link
The market is being inflated heavily right before a massive correction.

originally posted by: Darkmadness
The market is being inflated heavily right before a massive correction.

Hasn't the stock market been heavily inflated for its entire history? 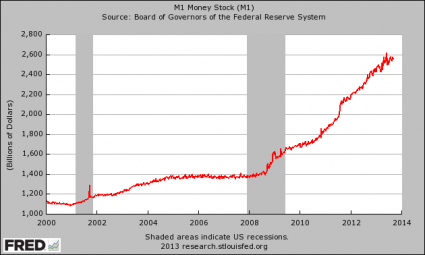 posted on Dec, 7 2016 @ 07:12 PM
link
The markets are front run by NSA supercomputers with unlimited funds to ensure theres always a buyer for whatever crap gets dumped the only corrections you'll ever see are allowed ones.PPT is pre-2008 the rabbit hole goes much deeper now.

originally posted by: khnum
The markets are front run by NSA supercomputers with unlimited funds to ensure theres always a buyer for whatever crap gets dumped the only corrections you'll ever see are allowed ones.PPT is pre-2008 the rabbit hole goes much deeper now.


Sounds like someone fell in the rabbit hole all the way to the bottom....


Its worked , what twice?(actually more)

These things require an operational and effective PPT.

So, it's mandated by the supreme law of the land.

originally posted by: lordcomac
Hot air balloon economics. The next deflation will be bad for everyone- Here's hoping I'm out of the city by then.

As companies have expanded their geographic reach, those operating in big cities have come to not produce much, but just move already made products around, or provide a service that is not a product. The ratio is like 80% service and 20% production. This may be due to efficiency improvements in production technologies, causing less need for production manpower. But the improvements in technology haven't eliminated the need to find a job to get paid.

Anyway, the point is it takes relatively few people to produce the goods needed to sustain all people.

So why should a stock market correction make you want to get out of the city? Wouldn't we still have all the goods we need to sustain all people?

Its not like a stock certificate is a good, is it?

originally posted by: glend
Does your calculations account for the increase of USD in circilation by 300% since 2000. All things being equal this should have caused a 300% collapse in the wealth of USD.

There has been inflation since 2000; my rent has doubled since then. Similar for home prices, since 2000.

Recently, USD has gotten stronger, relative to other currencies, since 2014. This seems like a deflationary signal to me.

originally posted by: khnum
The markets are front run by NSA supercomputers with unlimited funds to ensure theres always a buyer for whatever crap gets dumped the only corrections you'll ever see are allowed ones.PPT is pre-2008 the rabbit hole goes much deeper now.

Why should the NSA care about stock prices? Are stock certificates a good?


Its worked , what twice?(actually more)

Is the financial security of a country and its currency a national security issue?
Snowden interviews suggest it is.
edit on 7-12-2016 by khnum because: (no reason given)

originally posted by: AMPTAH
PPT comes right out of the Constitution of the United States ..."..to ensure domestic tranquility...etc.."

These things require an operational and effective PPT.

So, it's mandated by the supreme law of the land.

originally posted by: khnum
a reply to: InachMarbank

Is the financial security of a country and its currency a national security issue?
Snowden interviews suggest it is.


What do you mean by financial security of a country and its currency? How do you define this?

Ill give you an example if someone say Russia was to send a cyberpacket to destroy Wall Street to stop it you would have to monitor banks and Wall Street in real time,which they do among many other things.

And the stock market is about to crash.

You know that if it crashes, massive wealth will be wiped out, banks will fail, corporations will shut down,
and people will take to the streets to riot and protest. Unrest will spread all across the land.

What would you do?

If there's action that you can take to maintain national "tranquility" and the people's "welfare" you must take that action, because you've sworn to protect these things.

So, you press the PPT button, and viola, the stock market fall is halted.

By putting a "floor" on how low the stocks can fall, you maintain the SIX principles in the Constitution.