I am not sure if discussed yet figure guys might find interesting. It's a bit bizarre, these are really neat outfits though so I give them that. Apparently people in Europe are dressing like Krumpus or likeness of "evil" baphomet type outfits and tease the children. Having fun and being scary is one thing but from videos I've seen so far is they're actually hurting some kids which makes you wonder what the over all purpose of this is.

Is this a new fad, brothers of Europe? What do you guys think..

A lot of people here see Chrismas very religiously. Strange how this has played into good / evil.

Right now cause of Pizza Gate a lot of world is on Child Watch. I am not trying to offend anyone but anything luciferian/children should be observed with close eye in this "New Age" world.
www.independent.co.uk... 5 teenagers injured in Salzburg, Austria

They both go out together (according to the folklore) and Instead of St Nick giving out coal (as per one folklore), it was Krampus punishing the kids for misbehaving.

About as sinister as a monster under the bed.

Yea, I can see that. Kids shouldn't be hurt though for it. Unless...Krampus is real. Maybe this is hoax to darken our Christmas?

The video above is innocent enough. If people are having fun, great.

Anyone on here been to one of these events? It's different look on things. Lately Krampus made a huge impact... I am 30 years old and only know of Krampus last 2-3 years. It's new fad.

A part of Luther's breaking away from Catholicism included the elimination of the Saints. To provide children with a tradition similar to St. Nicholas, Luther introduced Chirstkind, an angelic spirit who presented German and Swiss children with presents. Those who follow this tradition see Kris Kringle as a rendition of Christkind.

According to my mom, the story goes he wasn't kind to kids that didn't behave. Read the link...
edit on 5-12-2016 by intrptr because: BB code

Krampus has been around a lot longer than the last few years lol. It's kinda like the clown thing. People have jumped on it for "shock value".

I don't know what you mean by "darken our Christmas".

I only know some of the tales and not even completely. The Kris Kringle and Christkind is a new one for me.

I guess their Krampus is like our "creepy clowns" of late....?

Something I think about from time to time is how the collective "we" seem to be shifting from admiration of heroes to admiration of the anti-hero.

Take some of the more successful shows over the past several years. There was the Sopranos which, in my opinion, ranged from boring to wildly entertaining (depending on the season/episode). People "liked" Tony Soprano but if one were to describe a real person who performed the same actions, they would likely consider that person a monster.

Same with Ray Donavan which is another show I found (past tense... no more Showtime for us) to be extremely entertaining. As with Tony Soprano, the main character here is really a complete scum-bag. Lies, cheats on his wife, physically assaults people, the whole nine yards.

I'm not trying to say that Hollywood controls people or vice-versa. I'm just saying something that I think about from time to time. Perhaps it's just me getting older.

posted on Dec, 5 2016 @ 07:51 PM
link
no one knows were the story of Krampus really came from but its old. it was never Santa vs. Krampus. Santa rewarded good children and Krampus punished the bad kids. the video is most likely from Austria were they have been doing this for a very long time. all it ever was is just a scare tactic for kids to be good. they don't worship Satan. it is no different then saying some one is going to hell for being bad, they just do it in costume.

It's soooo not a new thing. If you never heard of the Krampus growing up, your childhood was lacking.

Might be Europe's seasonal version of America's creepy clown phenomenon.

So wait, which one is "Satan's Claws"? 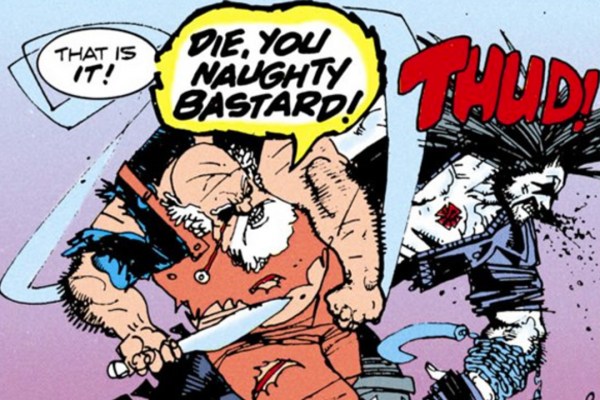 
No doubt. We teach our daughter that Santa is actually the Holly King, returning from the great hunt with gifts. The eight reindeer represent the eight sabbats, etc. The virgin birth of the new year (solstice) is an obvious connection for her to make, of course. In other words, we celebrate Christmas (Yule) in a very culturally-similar way to other Americans because Christmas is such a blend of various traditions and religions. If you walked into our home on Christmas morning, you'd have no idea we were a house of heathen witches, muahhahahahaahaha!

The Krampus doesn't really fit into our beliefs but she likes to believe in him, too.

posted on Dec, 5 2016 @ 08:05 PM
link
i think the worst Christmas characters to ever dress up as is from the dutch. Google search in images Dutch Christmas. it is hard to believe that in 2016 adults still dress up as Zwarte Piet, and no one really calls them out on it.
edit on 5-12-2016 by cancerslug because: (no reason given)

Pretty much every "tradition" nowadays is ripped off from a multitude of other cultures and religions then twisted until it fits whatever it is you want it to. Then commercialised to sell as much as possible.
edit on 5122016 by TerryDon79 because: (no reason given)

The one that's not Krampus lol.

Pretty much every "tradition" nowadays is ripped off from a multitude of other cultures and religions then twisted until it fits whatever it is you want it to. Then commercialized to sell as much as possible.


Yep. Time to throw the money changers out of the peoples temple...

Edit: Someone said we set aside the laws of God by our traditions. Tradition is a familiar rut.
edit on 5-12-2016 by intrptr because: Edit:

Thanks for the chuckle...

Oh, that's Santa vs. Lobo. I couldn't resist but squeeze that in here lol!

From Lobo's Paramilitary Christmas Special. In his bizarre twisted world (I guess its osme parallel universe or something), the Easter Bunny (representing all of the other holiday characters) hire Lobo to whack Santa. For getting all the jazz and being a chump. 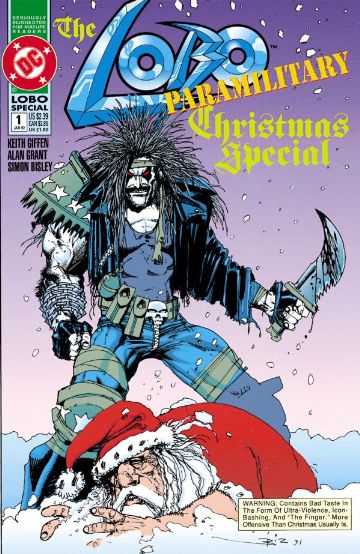 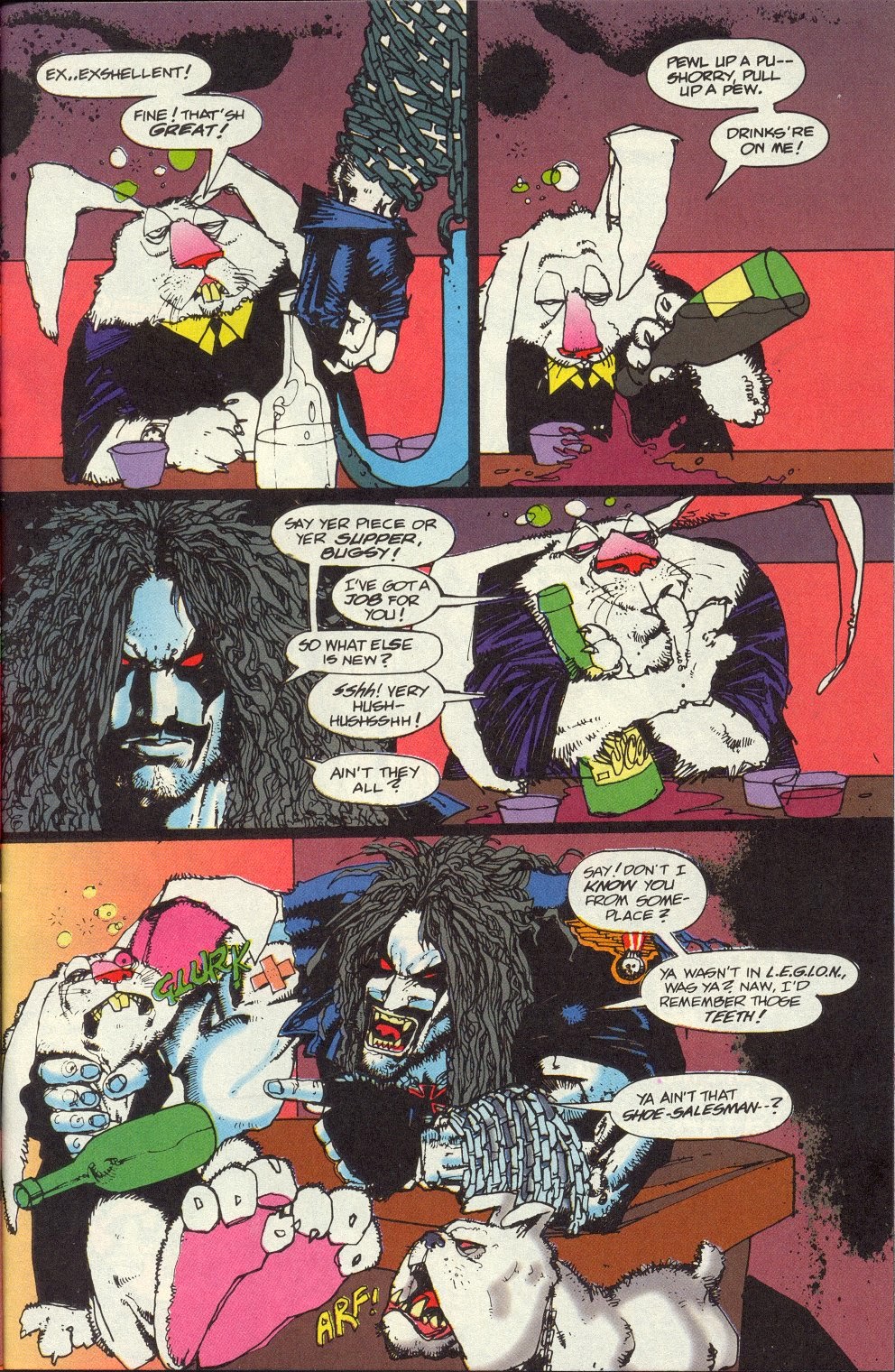 Did It Not Occur To Anyone That Jolly Old St. Nick Has Eight Reindeer, One For Each Continent... And An Elf For Each Reindeer.... And Eight Sacks For The Toys....

Who Wouldn't Want Christmas Day Off... Especially When We All Think Its A Jesus Thing And Only Need Santa For Our Greedy Present Wanting Souls. Jesus Does Not Give. But He Makes Us Give. Santa Is Clever....
edit on 6-12-2016 by Pinocchio because: (no reason given)