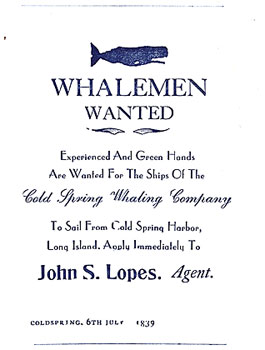 Ahoy there mateys! Calling all experienced whalemen and green hands for a high seas adventure! Though Moby Dick is a formidable foe, I have faith that we shall succeed in our hunt and find everything we seek. Prepare to read the greatest novel ever written in English.

Let's begin here tomorrow evening. Please read Etymology, Extracts (a bit dry in my estimation but don't worry, the excitement is right around the bend), and Chapter 1, Loomings. Take notes and come ready for some fun. BTW: This book is really funny, so I hope you keep that in mind as you go.

Some things I'd like to discuss tomorrow night are Ishmael's character, tone, and possibly symbolism/foreshadowing. But I also would like to encourage any one of you to lead when you wish or add anything to our study that you care to add. Feel free to post questions/prompts to the discussion here before we begin, along with any other advice, sentiments or concerns that you have.

We're all in this together..

We are about to embark on a thrilling maritime adventure! I hope you're ready!

Here's a link (thanks to Dan00 for finding it) to an online version of the text in case you don't have the hardcopy:

Project Gutenberg: Moby Dick; Or, The Whale by Herman Melville


Some further reading regarding Melville's life leading up to his writing this novel, at the age of 31 years old.

MOBY DICK Book Club Part 3 When Truth is at least as strange as fiction.
edit on 4-12-2016 by zosimov because: (no reason given)

posted on Dec, 4 2016 @ 09:48 PM
link
Moby Dick's character was inspired by a real albino bull whale that had earned a fearsome reputation for attacking whaling ships in the South Seas. The whale was given the name Mocha Dick. If you're interested, you can read more about him here.

Great song btw!! So glad to have you on the crew!

Fun fact: Ray Bradbury wrote the screenplay for the 1956 rendition of Moby Dick starring Gregory Peck
edit on 4-12-2016 by zosimov because: (no reason given)

When I first read this a little over a year ago now, in the midst of a stormy sea of my own (another story), which this book greatly helped me to successfully navigate, 3 things jumped out to me right off the bat.

The one, is that of an apparently white American sailor of the early-mid 1800's, calling himself Ishmael (which brings to mind a brown skinned man of Arabic descent), and two, this, which seemed to me rather prophetic in relation to modern times.

And doubtless, my going on this whaling voyage, formed part of the grand programme of Providence that was drawn up a long time ago. It came in as a sort of brief interlude and solo between more extensive performances. I take it that this part of the bill must have run something like this:

"Grand Contested Election for the Presidency of the United States."

"WHALING VOYAGE BY ONE ISHMAEL. "BLOODY BATTLE IN AFGHANISTAN."

That was a strange coincidence. Story was written in 1951. Seems rather prophetic (need to check out the history at that time).

Thirdly, as I was being led straight to the contemplation of the ocean regarding it's strange and almost mystic allure to people of all kinds, along with a good explanation of his desire to set off on a whaling voyage, I also had the sense of being forced to consider the possibility that there were two narratives running parallel to one another, the other one of which was of an allegorical nature, as if the whale and endless processions of the whale, while forming a phantom menace in the minds eye, is also a "hump" and a "snow hill in the air", as the chapter ends.

It makes me wonder what he's really up to in the telling of this story, which reads as if reading the book version of a lost video horror story, with a maritime-inspired foreboding not unlike the movie Jaws, as we flyover the scene, and are equally drawn, as he was, in sympathetic harmony with the promise of an ocean voyage.

Where is he hoping to take us?

Which only lends to the whole story, the desire to read on bravely, but questioningly, and wondering if he isn't speaking in metaphors half the time with an almost hypnotic aim and intent.

posted on Dec, 4 2016 @ 11:48 PM
link
So as a green hand, any idea of my wages on these whale boats.
Never taken to the ocean before, well not one that would have me away for more than a couple of days.

Yeah so I googled it
No whaleman was ever paid a wage, except in unusual circumstances. If, for instance, a full ship had to take on additional hands on the way home, their share of the profits would be zero (since they had not participated in the whaling) and they were paid a monthly wage. Ordinarily, each man, from the captain to the cabin boy, received a percentage of the profits— called a lay—at the end of the voyage.

I, too, wonder where Melville will lead us. And do believe there is a deeper layer (or several) to the text. I hope we can peel away the layers and get to the heart.

Great find! I'm so glad you are on board and can't wait to hear your insights.

What kind of story IS this?!

Is there a catch, or a trap being set?

And indeed, he does reference a trap in the opening of Chapter 2.

Great find! I'm so glad you are on board and can't wait to hear your insights.

Here to learn from others, though never go as a passenger, just a salt

Ha! Remember, if the seas get rough, you can always shut the book and come up for air.

Better a trap than a harpoon

originally posted by: Raggedyman
.. though never go as a passenger, just a salt

What's with the title and heading of that imaginary Bill of Providence?

Question: Was there a greatly contested Presidential election in the USA around that time, along with a resulting bloody battle in Afghanistan?

Ishmael? That is an Arabic sounding name, perhaps a reference to the black sheep in the family, orphaned?

..or was it a "bill" that he, the author, managed to send to the future, so powerful was this book and the story contained herein that it, that little piece of imagined prophecy ended up coming true..?

Ok, it appears there's a rational explanation, so in answer to my own question.

John Quincy Adams is elected president (1824-28) in a contested election that ends in the House of Representatives on 9 February 1825.  Speaker of the House Henry Clay uses his influence to elect Adams, an action bitterly resented by candidate Andrew Jackson, whose 99 electoral votes make him a logical choice.  Adams names Clay his Secretary of State.

Anglo-Afghan Wars, also called Afghan Wars, three conflicts (1839–42; 1878–80; 1919) in which Great Britain, from its base in India, sought to extend its control over neighbouring Afghanistan and to oppose Russian influence there.

And doubtless, my going on this whaling voyage, formed part of the grand programme of Providence that was drawn up a long time ago. It came in as a sort of brief interlude and solo between more extensive performances. I take it that this part of the bill must have run something like this:

"Grand Contested Election for the Presidency of the United States."

"WHALING VOYAGE BY ONE ISHMAEL."

So that answers that, a coincidence, but it's still curious how history can repeat itself.

Note/Factoid: Timeframe for story is set around 1830-31 or at about the mid-way point between the contested election and the start of the Anglo-Afghan Wars.

posted on Dec, 5 2016 @ 07:22 AM
link
Ankh, great job putting a date on the voyage! And the coincidence is spooky.. perhaps he did travel forward in time to warn us about the voyage we are about to embark upon.

posted on Dec, 5 2016 @ 04:44 PM
link
You will have to be patient. The copy I thought I had seems to have disappeared. I just got home with my new copy a while ago. I will be working through the assignment this evening.

One thing I have picked up from the bits I've skimmed so far: it seems to me that the whale men of Melville's day and the crab fishermen of today might have a bit in common.

As I am a Deadliest Catch fan, expect that my commentary my be peppered with such references. I will try to illuminate when and where I can, but for example - the already mentioned bit about no wages is right in line with how crab fishermen get paid.

They are given a cut of the boat's profits at the end of the season. How much of a cut is often determined by how experienced the hand is.

Hi ketsuko, I hope you're enjoying the read!

Very apt analogy (although I don't watch the show). I'm pretty sure whaling was a dangerous, exciting job with little monetary reward.

I still have to take care of my kids, and thought I would aim to start in three hours or so? I hope that's an alright time for everyone.

Could you maybe pose a series of questions for the first 3 chapters?

I'm interested in trying to get to the root of the allegorical aspects of the story and what he's hoping to lift the mind's eye to ponder over and reflect upon.

What's the assignment to get this party started?