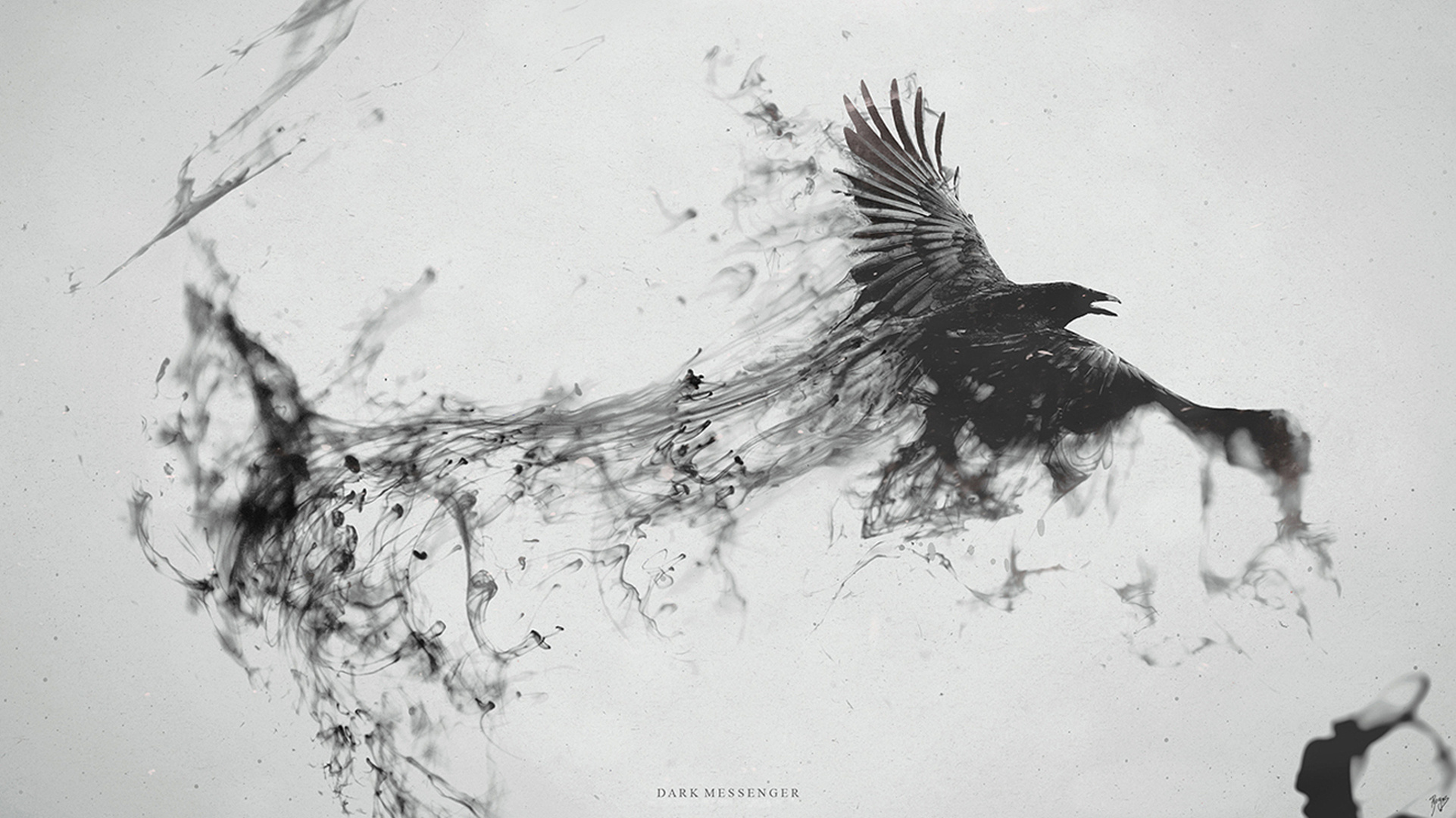 I stumbled upon a Crow wooden like door when i was searching for something else in the great halls of mystery and magic, i entered this room, most cause of curiosity, but mostly cause my gut feeling said;" This is important". So i sat for a while going through the books looking for a common tale to tell.

I can tell a small tale before jumping into the mythology.

"They know what death is and know to fear it"

Crows view death, at least in part, as a 'teachable moment, they learn our faces and do so by interacting with their dead fallen brethren.
--

For the Celts, the crow was sacred and meant the flesh torn by fighting. As he eats carrion, the welsh poetry uses the metaphor "the crow pierced you" to say "you have died". They thought crows escorted the sun during his nocturnal path, that is to say in Hell. So they were a symbol of evil, contrary to swanns, symbolizing purity. The crow was sacred for the Celts. He was associated to the creation of Lugdunum (Lyon), city of the God Lug. Lug is the great solar god. He has the form of a crow and is assimilated to Apollo.

In Celtic civilisation, he has prophetic functions. Bodb, Goddess of the war, takes the form of a raven to observe the battlefields. The crows' fly and cawings told the future. The crow was also linked to Bran, God of the sailors (bran means crow in gaelic) : the sailors had crows on their boats. They released them at sea. They flied in the direction of the earth. The same idea is in the Bible (after the flood Noah released first a crow),in India and in Norway.

The Morrígan ("phantom queen") or Mórrígan ("great queen"), also known as Morrígu, is a figure from Irish mythology. The name is spelled Morríghan or Mór-ríoghain in Modern Irish.
The Morrígan is primarily associated with fate, especially with foretelling doom and death in battle. In this role she appears as a crow, flying above the battlefield. The Morrígan has thus been likened to the Valkyries and Norns of Norse mythology.
--

In Babylon, the crow was the name of the 13th month of the calendar. In year 17 of 19-year cycle, the intercalary month was named Araḫ Ulūlu.
The Babylonian calendar was a lunisolar calendar with years consisting of 12 lunar months, each beginning when a new crescent moon was first sighted low on the western horizon at sunset, plus an intercalary month inserted as needed by decree. The calendar is based on a Sumerian (Ur III) predecessor preserved in the Umma calendar of Shulgi.
--

For the Greeks, the crow was too gossipy. That's why Athena replaced him with the owl, to stay with her. The crow was also devoted to Apollo. The god sent him to the aquatic world, to bring back water. The crow discovered a fig tree whose fruits were not ripe yet, so he waited near the tree to eat ripe figs instead of accomplishing his task . He was punished for his disobediance and egotism : Apollo placed him in the constellations, but the hydra prevented him from drinking the cup : he is condemned to thirst.
Crow foretold the future
--

In the Bible, the crow is sent by Noah to search earth after the flood. But the crow didn't told Noé that the flood was finished. So he is considered selfish. Saint Golowin thought that in Paradise, the crows had multicoloured wings. But after Adam and Eve were driven away from the Paradise, the crows started to eat carrion. So they became black-feathered. At the end of time, the crows will find their beauty again and sing harmoniously to praise God.
The crow also brings bead to man, alone in the desert.Prophet Elie, Saint Paul hermit, Saint Antoine... Saint Vincent had been defended by crows against the attack of carnivores; the crow is also seen at Saint Benoît's feet and in Saint Oswald's hands. Here, he symbolizes divine providence. He is also linked to Saints Boniface and Meinrad : their two tame crows allowed to find their corpses.
--

In the Middle-Ages, it was said that crows neglect their young; as he eats carrions, he is seen as a bad omen.
--

In India, in the Mahâbhârata, the messengers of death are compared to crows. In Laos, the water soiled by crows can't be used for ritual purification.
--

It is mostly in nomadic civilisations (hunters and fishers) that the crow has a positive meaning. He lost this meaning with the sedentarisation and the agrarian developpement.

For Tlingit Indians (North-West of the Pacific), the crow is the main divine character. He organises the world, gives civilisation and culture, creates and freeze the sun.
--

For Haïda indians (North-western coast of the Canada), the crow will steal the sun from the sky's master, to give it to the earth's people. Raven has also a magic canoe : he can make it change its size, from the pine needle size, to big enough to contain the whole universe.
--

North America
In North America, he is the personnification of the Supreme Being. When he flaps his wings he creates the wind, the thunder and the lightning.
--

In Mithra's cult, he can fight evil spells.
--

Scandinavians Legends
Scandinavians legends show two crows, perched on Odin's seat : Hugi, the Spirit, and Munnin, the Memory. They symbolize the principle of creation. In the same way, these birds are the companions of Wotan ("the God with the crows").
--

The crow has also a role in the asiatic mythology : in China and in Japan, he shows love and filial gratitude.According to chinese legends, ten red crows with three paws flew away from the East Blackberry Tree to bring light to the world. But they brought an unbearable heat to the Earth. Yi The Good Archer killed nine of them, and saved the world. The last Crow is now in the Sun.
--

The major meaning of this black bird is to be a guide and the Gods' messenger.

In Black Africa, the crow warns men that dangers are menacing them. The crow is their guide and a protector spirit.
--

For Mayas, he is the messenger of the God of lightning and thunder.
--

In the mithraic cult, Sol(the God Sun) entrust the crow with telling Mithra to sacrifice the bull.
--

Japan
In Japan, crows are also divine messengers, and in China they are the faerie queen Hsi-Wang-Mu's messengers. They also bring her food and are a good omen.
--

The Crow - Myth
The Morrigan
Babylonian Calendar
Shulgi
Tlingit Indians
edit on 20161129 by tikbalang because: image

I really enjoyed the opening
and the information.

Thank you, i tend to forget what i do sometimes, and forget where i found the notes, so i gather them together..

I didn't know most of that,, just know death has a crow called (dust) with him everywhere he goes,, something like that.
edit on 29-11-2016 by DarkvsLight29 because: (no reason given)


Edit again lol, think dust is just the Crow from Darksiders 2 lol, although seems to be deaths eyes from above etc, seems a little to do with the mythology of the Crow?
edit on 29-11-2016 by DarkvsLight29 because: (no reason given)

posted on Nov, 29 2016 @ 08:00 PM
link
An Morrigan (the Morrigan) is associated with a lot more than "Fate". She is associated with sovereignty of the land, divination and prophesy (that is distinct from fate) war, lust, magic etc.

As I've said before, Indo-European mythology can be complex. You've got a couple of IE cultures listed there

You've not read the thesis (it was a PhD thesis, which has since been published). The author stuck to culturally similar groups for her comparisons.

The IE mythology is not complex actually, it's very simple, finding its nature is the tricky part..

Actually it is complex. Its why people like Dumézil, Mallory, etc can write large books about it, the interpretation of it, and such topics. You always seem to default to implying that IE is simple.

I'm not gonna say trust me when i say it's not complex, but it is.
Your gifted mind betrays you in this field, remember Bruce Lee and the water?

I can write a huge story about it, but I can also narrow it down to a few words.. people still hold that secret very dear, the reason why Himmler went to Tibet..

Yet came empty handed even though he just had to watch..

I've never watched any Bruce lee movies. Not my thing. To begin with my martial arts are those of Fairbairn

I study IE mythology for fun. I am pretty sure you've not read that much about them, beyond cursory glances. So it may seem simple too you. But if you delved in to Dumézil or better Mallory, you'd find they are rich, and complex.

I did study it extensively, Was part of my curriculum.. I'm not judging you in any way, you find a path in the rich and complex stories, I discarded them for something else.

Then you know about Dumézil, Mallory, etc. You claim you "Discarded them for something else", yet you never really say what that is, unless you mean Abrahamic mythology

To do it with a Abrahamic style, Ambition is the same as the cardinal sin greed..


John 14:6 - Jesus answered, “I am the way and the truth and the life. No one comes to the Father except through Me"

Finding the true path means you have to succumb to our lord and savior.

Oh so now you admit your Abrahamic bias.

Your gnosis is your gnosis, not mine. It is unprovable.

You also just quoted a religious fairytale at me, after belittling one I quoted all those posts ago.

At least you are being honest now Good for you.

I however will stick with the way of my ancestors thanks.

Its a riddle and its a parable.

I'm aware, and it does not apply to me