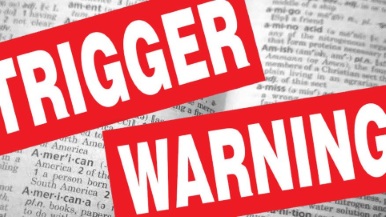 Talk about over the top satire! If only they or this noise was a laughing matter. Everything involved, for the MSM to take this posture it is tantamount to them doing a perpetual marathon of a standup routine of bad atrocity & genocide jokes as a one way street from their safe space into yours. The part that its on par with the trigger warning stickers the SJW's set about labeling all the "offensive" books in the libraries, well that makes the whole charade into a slapstick caricature of the Orweillian variety.

The very idea of this iniative itself is impossible, even if it wasnt coming from the MSM. Because it is, the fact is even if the entire ATS site here every word herein was dedicated to just chronicling their lies over the past 3+ generations we would only have a tiny fraction of it covered, and that's not even counting the millions of obituaries they are just as responsible for as any other player involved in the countless government, political, military and corporate misdeeds they mind warped us into supporting, and help cover the bulk of it up via a bag of tricks longer than the "FAKE news" sites list they've trigger warned us about.

Kinda depends. Everything seems to be a fricking trigger these days.

Can't tell up from down anymore.

I believe what was actually said (drawing off memory here) on the PropOrNot site was that ATS is a reliable repeater of Russian propanda. Depending on whose fronting a few of these "fake news" sources, that's quite likely to be true. That said, I think that PropOrNot looks like a joke. There's no explanations given, there's no distinctions made — there's nothing but a couple stupid lists. It also seems ridiculous to list forums or social media. If that's the case, Facebook, Twitter, YouTube and hell, Instragram all should be on the list as they're probably the biggest conduits for the spread of "fake news" there are.

As for people being triggered. What is this thread #50 of essentially the same stuff?

Meanwhile, the flood of disinformation that the "mainstream media" has seemingly just caught wind of, has been building for some time now and it's very real. For all of the problems with the "mainstream media" (which I suppose we really should define?) I'll still take even the mainstream right — Fox, National Review, NY Post, The Weekly Standard, Daily Caller, TownHall, Redstate, etc (even The Blaze) — over a bunch of WordPress blog sites run by unknown people from unknown locations who can shutdown and open up shop under some other stupid name like USAPatriotPoliticsWire.Com in the span of an hour if they draw too much attention for a completely fabricated story.

The answer to mainstream media woes is to hold media outlets, editors, journalists/reporters, etc accountable — not to deny there's anything going on because you're still butthurt that they didn't fawn over Trump like Brietbart, RT and Sputnik.

THE LIST pushed and legitimized by no less than the Washington Post and countless other MSM news sources, you mean.

posted on Nov, 28 2016 @ 01:25 AM
link
Doesn't it seem that the people are being trained to accept these 'triggers' as part of the social experiment we are being played for. All the social and civil unrest the past few years seems very manipulated.

Who are the countless other sites? I've seen it derided in a few?

Looks like a few sites had articles about Washington Post's article. When you search "PropOrNot" under Google News, three of the first 5 are critical (The Intercept, Fortune, Daily Caller), one is Washington Post and the fifth? Well that's an article on AlterNet by Sidney Blumenthal's son Max.

A shady website that claims “Russia is Manipulating US Opinion Through Online Propaganda” has compiled a blacklist of websites its anonymous authors accuse of pushing fake news and Russian propaganda. The blacklist includes over 200 outlets, from the right-wing Drudge Report and Russian government-funded Russia Today, to Wikileaks and an array of marginal conspiracy and far-right sites. The blacklist also includes some of the flagship publications of the progressive left, including Truthdig, Counterpunch, Truthout, Naked Capitalism, and the Black Agenda Report, a leftist African-American opinion hub that is critical of the liberal black political establishment.

Despite the Washington Post’s charitable description of PropOrNot as a group of independent-minded researchers dedicated to protecting the integrity of American democracy, the shadowy group bears many of the qualities of the red enemies it claims to be battling. In addition to its blacklist of Russian dupes, it lists a collection of outlets funded by the U.S. State Department, NATO and assorted tech and weapons companies as “allies.” PropOrNot’s methodology is so shabby it is able to peg widely read outlets like Naked Capitalism, a leading left-wing financial news blog, as Russian propaganda operations.

Nah, let's all pretend like this is some super official list for the nonexistent censors to justify faux outrage.
edit on 2016-11-28 by theantediluvian because: (no reason given)

Not a few. Many, including the NYTimes.

Most repeated the story, VERY few were critical. When time permits, do you wanna bet I'm right by listing the top 25 or so media outlets?

Didn't it come after the Ron Paul fake news list?

Who is really triggered then if that was the case?

ATS is definately a conduit for Russian propaganda, most here don't mind or care though, they do when it's pointed out though!

Yeah it's absolutely being manipulated and I agree with the trigger thing being experimental. They've always done trial runs via the gov. The Millitary and pot/drugs is one example of the extent they're willing to go tot he detriment of the public, unbenownst to them. No one should be used in this way, it's disgusting imo.

ATS is a discussion board, not a news site. I have followed these boards on and off since '99 and I observe no Russian prop. What I've witnessed has been opinions coupled with links to news, real or fake.
Opinions from around the world.
Four years ago there was no talk of the red scare. Why now? Cause Trump won?
Face it, you lost. For better or worse he is our president now, let it sink in.
Btw I'm a italian-puerto Rican from New York, no Russian spy here.
edit on 28-11-2016 by VinylTyrant because: (no reason given)

Denying that fact is like denying the sky is blue.

If pro Russian posters overly post pro Russian sentiment that does not equate to the entire site overrun.
Americans are so fed up with the path we've been led down that it actually leads many to agree with Putin of all people, imagine that.
The easy scapegoat for our continuous demise is Russia. Sad really.

My apologies for assuming your position. I thought I remembered you taking a different stance but may have been mistaken.

posted on Nov, 28 2016 @ 05:29 AM
link
Are people denying ats has not had its fair share of fakes news put in the forums? just looking at the hoax bin says otherwise.

Does CNN.com have a hoax bin?

My desktop is currently down, so i cant much run data like Im used to doing in here. 😭😭