posted on Nov, 27 2016 @ 09:52 PM
link
Great article about the B-52 reengining saga. Changing an engine type on an existing platform is always problematical for various reasons. One good example is the DC-8. They took the Dash 60, with JT3D engines, and turned them into the Super 70, with CFM56 engines. They found that they actually lost some performance on takeoff due to the new engines, even while saving in fuel burn, and reducing the noise footprint.

But then you run into the serious problems associated with changing the engine types. The KC-135 had to have an Engine Failure Assist System (EFAS) added to the aircraft, because if they lost an engine on takeoff, the pilot wouldn't be able to react fast enough to save the aircraft. Which ties in directly with the major problem the B-52 would encounter. When the B-52 was designed, it was designed for high altitude flight and bombing, so it was designed with a high tail, and small rudder. The tail had to be tall to offer directional stability at high altitude. The rudder and elevator, contrary to most aircraft that have a 25% chord to give sufficient effectiveness, the B-52 has a 10% chord on both. This is because it was found that the rudder and elevators would exceed the critical Mach number before the wing.

But when the F model was redesigned to the G model, the aircraft was to be used to fly at low level, which meant the tail had to be cut in half, and widened to reduce flutter conditions at low level. This means that the stability at high altitude is reduced, especially during in flight refueling. The rudder, as it is now, can only compensate for an asymmetrical condition caused by an engine out on takeoff, under a very small speed window, and only with certain engines. If they don't immediately put in full rudder, then minimum control speeds can increase as much as 25 knots. The TF33 engines currently in use, had to be derated, because if they were operated at full power on takeoff, then the rudder wouldn't be able to compensate for an asymmetrical condition if an engine failed.

All of this plays a big role in the way forward for replacing the TF33 engines on the B-52. If they were to go to a four engine setup, the rudder would need a complete redesign. It would not be capable of controlling the aircraft in an asymmetric condition. If they do a one to one replacement, they'd have to either derate the engines again, or design a new rudder.

It seems that the USAF cannot get through a year without being inundated with calls to replace the engines on the B-52. Recent calls from Air Force Global Strike Command,[1] Boeing, General Electric[2] and Pratt & Whitney[3] have renewed the vigor of the program despite the general lack of funding and enthusiasm for large dollar aircraft procurement. Fuel savings and increases in capability are touted as the driving factors in these programs. However, for the B-52 these arguments show little merit when they are studied with any depth.

Where it concerns the B-52, we are fortunate that there is a long and well documented history of the design process. Not only do we know the specifics of the design, we know why it was designed a specific way. Its strengths and weaknesses have been well vetted through a half century of combat. That history can guide us towards a full understanding of what a re-engine[4] program may entail.

Upgrades to existing systems are done for a variety of reasons. Typical upgrades are used to correct a deficiency or to create a required capability. There have been cases where upgrades are done to ensure a particular system remains viable in a new environment. Sometimes upgrades solve logistical problems as certain parts are no longer produced and an upgraded system is necessary to continue using the whole aircraft. For example, in the early 2000s the B‑52 upgraded its 1970s‑era beryllium ball inertial navigation system with a modern ring-laser gyro system in order to correct a failed supply line, not to increase its navigation performance.

posted on Nov, 27 2016 @ 10:04 PM
link
Interesting. I was cross country road tripping last week and stopped to tour the museum at Barksdale (have a few crappy phone pics I can post if anyone's interested). Sitting out by one of the hangars right off the flight line was a -52 that looked like it was having engines replaced. The vertical tail structure had been completely removed also. Coincidence? I, ummm, might have a pic of that plane too. It was a Sunday that I visited, and there wasn't any activity to see.

As I mentioned in another thread, I worked on the F-4G. The F-4 was a special aircraft, but her time was over. The BUFF's time has been over for quite awhile. She should have been retired after Desert Storm, and the strategic bomber fleet should have been upgraded back then... but, alas, the USAF has become the domain of the fighter jocks...

originally posted by: Zaphod58
a reply to: shagg

A modern fleet should not have to cannibalize parts to maintain FMC (Fully Mission Capable) aircraft... this has been happening for decades on older airframes...

The B-52 fleet is required to have 76 aircraft in the inventory at all times. Ghost Rider (1007) had been in Type 1000 storage in the Boneyard for seven years. When 0049 was written off, they had to pull an aircraft from the Boneyard, but it had already been stripped of some parts to put into the supply chain, and didn't have the required upgrades that had been done since it went into storage.

They flew it to Barksdale with a crew of three (AC, copilot, radar nav) at low altitude and low speed, and began taking parts off 0049 to restore the removed parts, and the upgrades, and putting them on Ghost Rider, before it went to Tinker for complete PDM. The choice was to remove the parts from the supply chain, and put the parts from 0049 back into the chain, or take them from 0049 and put them straight into Rider, and leave the supply chain intact. It made more sense to take them from one aircraft and put them into the other. At the time it was done, Ghost Rider was nowhere near FMC. Hell, it wasn't even PMC yet.

...which is still 18 years older than me. I retired after 20+ years; anyway you do the math, they are a seriously aging fleet...

Yes and no. The design is old, but in actual life cycle terms, the airframes are only about halfway through it. The economic service life is between 32,000 and 37,000 hours. The life cycle is determined by the upper wing surface, which based on fatigue testing should be somewhere between those hours. The current fleet is nowhere near that yet.

posted on Nov, 28 2016 @ 05:29 AM
link
Wasnt there an algorithm developed for transports to reduce drag by various fillets and streamlinings?Could this be developed for the BUFF?

Clearly my favorite B-52 ever. 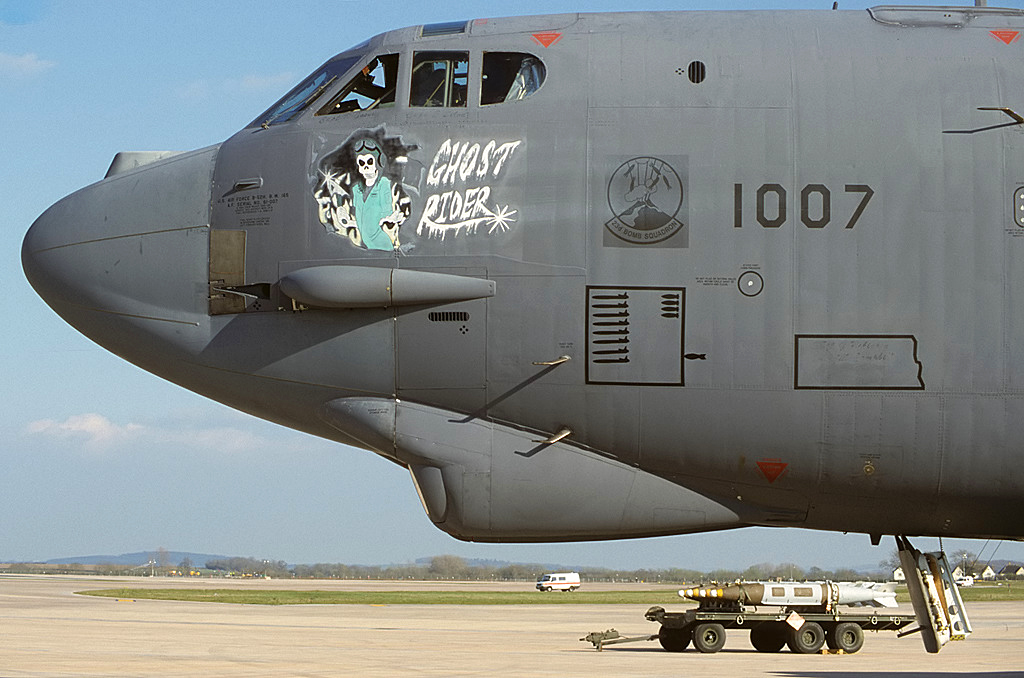 Ghost Rider rises from the grave to ride again

They're trying various things with different aircraft now. They have a C-17 that currently has the strakes removed. They're also looking at smoothing the gaps between engine and mount, etc. It Should work on any aircraft, depending on which method works best.

posted on Jun, 18 2018 @ 03:24 PM
link
This was the easiest thread to bump, but new news on the new engine front. Pratt&Whitney has announced that they're going to offer a member of the PW815 family, which was developed for the Gulfstream G500 and G600. They were originally planning to offer reengineered TF33s, replacing the fan and combustor with modern materials among other changes.

posted on Jun, 18 2018 @ 07:20 PM
link
a reply to: Zaphod58
Thats one of several new modern engines that will slot in nicely and meet the size, thrust and weight footprint. I assume they will need a new or redesigned nacelle and cowling though whichever engine ends up being selected. It will be interesting to see what this does in the way of reduced fuel burn and therefore range or ordnance increases. Noise will also be vastly reduced. I imagine therefore the structure and skins wont need quite as regular maintenance as they do with the old engines.

Part of the contract will be the nacelle changes required. They're to be kept to the bare minimum required under the contract.

Or how large it would have to be to have full rudder authority if they went to a four engine setup, and lost an outboard.

It would be interesting to revisit the idea of a 747 bomber. You would need to have bomb bays fore and aft of the centre wing box as opposed to the B-52's single large mid bay, but that's what you get if you start with a low mount wing as opposed to high mount. Rudder authority in a 747 is not an issue with engine out conditions. You would probably start with the freighter model and go from there. Even with the two bays though you could probably carry anything in the current arsenal with a very deep magazine for JDAM, SDB, JASSM etc. In terms of qualifying systems and proving mil spec compliance, I would imagine that much of the work going into the 2 new VC-25's could be grandfathered across to a bomber variant of the 747-8. Its not going to happen but its not a bad idea for a modern bomb truck/arsenal plane set up.