Andrew Breitbart knew about the pedophilia and sex slaves

posted on Nov, 27 2016 @ 05:16 PM
link
Below is a twitter post that Breitbart made to Podesta in 2011 filled with vile regarding this. If you look down further on the link you will see another post to Podesta referencing Acorn with from 2010

It is hard to tell if he is accusing Podesta of the acts or accusing him for helping someone in acorn who was. Maybe both

If you recall Acorn came down in 2009 when leaders were charged with Fraud. Podesta later appointed Steve Kest to some position at Center for American Progress. Kest helped cover up the Fraud. Add this because I don't know exactly who Breitbart was targeting at Acorn.

Needless to say, he knew a lot more than he was telling

It seems like it was an open scret among the ruling elite for many years, just like Epsein's lolita express/island.

originally posted by: ketsuko
Something helped convert Breitbart from a leftist.

When was that? I never knew he was left.

WARNING: Crude Language
I'm only posting these links for others to verify the information they contain. This is about the ACORN scandal and whether or not the hidden camera tapes and the interactions filmed, indicate that there is something going on behind the scenes. Immigrants were being flown in, many underage and ACORN was cool knowing that they were being used for prostitution.

The Tides Foundation, George Soros, American Center for Progress are all Open Borders pushers. Do they really care so much for the poor and angry immigrants they import—my answer is NO! Immigrants are pawns.

Those ACORN tapes and the attitude of ACORN workers toward the idea of bringing young girls across the border illegally tells us that. It’s all about their political agenda and about winning. With perfect timing I just got an e-mail from reader B.L. with this quote from Clinton about a Vast Right-wing conspiracy.

Yesterday, Clinton was asked on ‘Meet the Press’ (Limbaugh calls it ‘Meet the Depressed’) if he feared a Republican takeover of Congress in 2010 and he confidently said no:

“There’s no way” that could happen, Clinton said, adding that “the country is more diverse….”

Back to Breitbart who is morally outraged, as most of us are, at the idea of ACORN workers not batting an eyelash at the part of the scam involving underaged girls from El Salvador illegally entering the US. Here he suggests Mr. Fix-it Podesta may have a harder time with this scandal.

Plus, unlike Mr. Clinton’s war-room blame-the-messenger excuse – “it’s just about the sex” – this year’s ACORN scandal won’t be pushed aside, because this time it includes 13-year-old sex slaves from El Salvador.

I hope he is right, but I wouldn’t be so sure. Thirteen-year-old girls from El Salvador are a twofer for some Democrats. Think about it! Useful now, but in 5 years they could be counted on as reliable Democratic party voters.

Here is some more information, reader discretion advised. Wikipedia can produce a lot of dead ends. Do your research.

In July and August 2009, Giles and O'Keefe visited ACORN offices in Baltimore, Washington, D.C., Brooklyn, San Bernardino, San Diego, Philadelphia, Los Angeles, and Miami. Giles dressed as a prostitute, while O'Keefe wore white khakis with a blue dress shirt and/or tie and claimed to be her boyfriend. Giles and O'Keefe recorded the encounters using hidden cameras and pretended to be seeking advice on how to run an illegal business that included the use of underage girls in the sex trade.


The outcome of their little experiment caused quite the stir...

The edited videos were released on Fox News and the website BigGovernment.com from September into November 2009, generating extensive, negative publicity for ACORN, and leading to the U.S. Census Bureau and the IRS ending their contracts with ACORN, the U.S. Congress suspending its funding - and ACORN losing most of its private funding, despite several independent investigations that by December 2009 began to reveal no criminal activity by ACORN staff had taken place.


The connection? Podesta may have intentionally covered it all up.

The next day, Clinton Chief of Staff John Podesta, the Democratic Party’s top fix-it guy with control over much of the left’s well-funded vast attack machinery (think George Soros, the Tides Foundation, et al.), was among a small advisory group placed in charge of investigating the matter.

With the mainstream media continuing to ignore the evidence on the tapes, Mr. Podesta is now clearly in charge of feeding them information about his well-structured investigation into the investigators. The ACORN internal probe is a “war room” aimed at destroying the messengers and is not meant to clean up major corruption.

Since Mr. Podesta was appointed to investigate ACORN, the only thing investigated has been the investigators, Mr. O’Keefe, Ms. Giles and the publisher of the journalism behind it, yours truly. 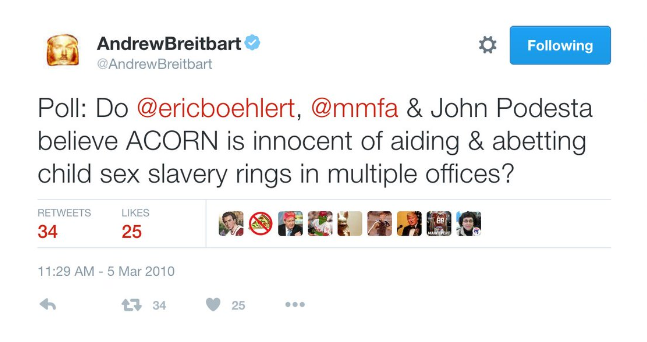 What a coincidence! Breitbart's coroner dead from arsenic poisoning?

Michael Cormier, 61, passed away on April 20, the Los Angeles Times reports this week. Although Cormier’s death is only being publicized now, the timing of actual passing actually came within hours of the release of the preliminary autopsy report of Breitbart.


No wonder the elites are afraid of Breitbart News. There seems to be some loose ends that need tying up.


Arsenic poisoning....Happens all the time.

Perhaps Obama, Hillary and podesta split the bill on the hit. edit on 27-11-2016 by pianopraze because: adjusting images to fit page

Every day... Without suspicion.

originally posted by: liveandlearn
a reply to: eisegesis

Oh, yes, I don't forget things easily, and that was one of the first things that came to mind with Pizzagate was the sting on ACORN. It didn't take much digging to turn up that Podesta was the one who did their internal investigation, too.

Then I remembered that flood of unaccompanied illegal minors.

Where did they all go one wonders?


This was right before he was killed... er... had a heart attack and died a couple years ago.


It shows Podesta is hip deep in the pedo-ring and is aiding and abetting to say the least.

Hmm... wonder if this is why Trump is supposedly backing off prosecuting over server... Bannon has known about this for years.

The coroner was poisoned... er... died with poison in his system that might or might not have killed him THE DAY HE RELEASED the autopsy of Breitbart.

Given Bretibart was going after Podesta and indirectly Hilary and Bill....


After Breitbart died suddenly of heart failure on March 1, it didn’t take long for Internet conspiracy theorists to accuse President Barack Obama of murdering him.

Now, the recent Los Angeles Times report that Michael Cormier, an LA County forensic technician, may have died due to arsenic poisoning has reignited conspiratorial fire, given that Cormier died on April 20, the same day as the release of Breibart’s autopsy.

Law enforcement sources told the Times that the presence of poison in Cormier does not necessarily point to a homicide as the substance may have entered his system by accident. However, the police haven’t ruled out foul play, and Cormier’s cause of death has been deferred pending further tests.

Don't know exactly what it was but it was apparently about Obama. Some videos I have read. None the less, there were certainly many reasons of off him.


Source of your suspicion ?