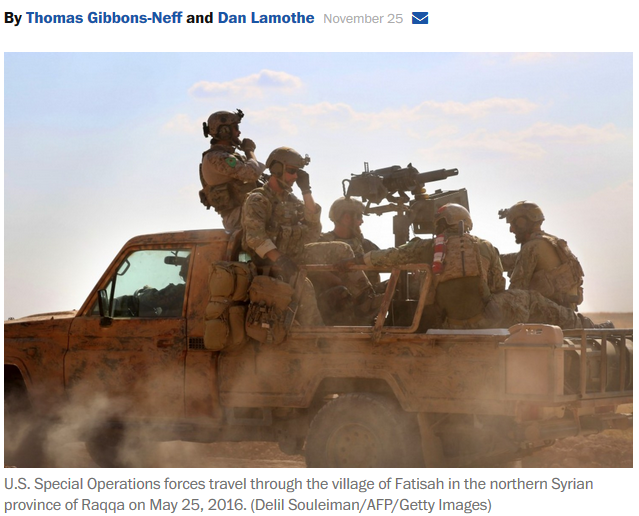 So, Obama has decided to give JSOC a blank check to operate around the globe to counter any "terrorist threat" against our country. Thanks to propaganda laws, anyone and anything can be called a terrorist threat by the entire establishment media peddling fake news. I don't really know what to say. I have always said to myself, "If a target needs striking, lets strike!" But how do we confirm these are even legitimate targets, and not personal vendettas being carried out on the whim of a crooked politician from an allied nation?? I guess we will never know, and likely neither will the soldiers who will carry out their orders without question. We just have to take fake establishment news at their word and believe a terrorist is a terrorist when they say it is.

I think there should be some more public debate on this in congress.


The Obama administration is giving the elite Joint Special Operations Command — the organization that helped kill Osama bin Laden in a 2011 raid by Navy SEALs — expanded power to track, plan and potentially launch attacks on terrorist cells around the globe, a move driven by concerns of a dispersed terrorist threat as Islamic State militants are driven from strongholds in Iraq and Syria, U.S. officials said.

When finalized, it will elevate JSOC from being a highly-valued strike tool used by regional military commands to leading a new multiagency intelligence and action force. Known as the “Counter-External Operations Task Force,” the group will be designed to take JSOC’s targeting model — honed over the last 15 years of conflict — and export it globally to go after terrorist networks plotting attacks against the West.

The new JSOC task force could also offer intelligence, strike recommendations and advice to the militaries and security forces of traditional Western allies, or conduct joint operations, officials said. In other parts of the world, with weak or no governments, JSOC could act unilaterally.

It remains to be seen if the new organization will generate tensions between Special Operations Command and the generals in charge of U.S. forces in places such as the Middle East or Europe. In his March congressional confirmation testimony, Thomas suggested that assigning more authorities to SOCOM would allow for “synchronized operations” against nonstate threats that span geographic boundaries. But regional commanders, all four star generals, guard their turf carefully.

Maybe this could be a good thing?? I lack enough legal information to really understand the ramification of this. I hope if it goes forward, it is for the best. Thoughts and opinions are welcome.

posted on Nov, 27 2016 @ 05:50 AM
link
Can't see it being exactly welcomed when at any time any place of the world the US believes it can turn up and do what it wants above the authority of the sovereign nation its deciding to send troops into.

What happens if they decide to lets say raid some place here in the UK and all we know is that theres a bunch of guys with military gear attacking some place and we roll in the SAS/SBS etc and things get murky very quickly politically.

The US government has been in a long time argument with the Irish authorities about access to some emails, could they send them in to retrieve them?
edit on 27-11-2016 by Maxatoria because: (no reason given)

posted on Nov, 27 2016 @ 06:21 AM
link
Translation: Since now gun totin . bible carrying conservatives are considered terrorists , and thanks to my other legislation , I can now hunt them down (re: drone their a**) anywhere in the world for any reason. Without due process.
edit on 11/27/16 by Gothmog because: (no reason given)

originally posted by: Gothmog
Translation: Since now gun totin . bible carrying conservatives are considered terrorists , and thanks to my other legislation , I can now hunt them down (re: drone their a**) anywhere in the world for any reason. Without due process.

Yea, I believe this is nothing more than to go after Ex Pats who are speaking out from outside the country, to diminish the success of the globalists and Corporations. Obama seems to have sat on his thumbs welcoming anyone and everyone who hates the US to come on in while doing nothing serious to combat radical Islamists.... Hell, the UK is now talking about NOT leaving the EU!!!