Location of the town of Palomares.

On the morning of January 17 1966 a B-52G on a mission part of the operation Chrome Dome commenced its second scheduled air to air refuel returning from the USSR borders on his way to it base on North Carolina. The Bomber started the refuel from a KC-135 coming from the Moron air base in southern Spain. Without any indication of the Boom operator to prevent a dangerous situation, the boom and the bomber suffered a midair collision resulting in the explosion of the KC-135, killing the entire crew of the refuel plane and three of the bomber’s men, as the B-52 broke apart midair, four men were able to parachute to safety as the plane ultimately crashed near the fishing village of Palomares.


Debris of one of the planes over tomato fields.


The payload of the B-52 was scattered, three H bombs landed around the town and a fourth landed 5 miles offshore in the Mediterranean.

Even as the B28 nuclear bombs carried by the B-52 had parachutes to safety land in case of an emergency, two of the devices malfunction and the conventional explosive exploded on impact, contaminating a 2-square mile area. A search operation with the help of RAF located the 3 crash sites on land and in 24 hours the 3 bombs were recovered.

The fourth bomb was not located for months; with the help of mathematical model, and directions from a local Fisherman that witness the crash, Francisco Simo Ort latter known as “Paco el de la bomba” or Bomb Frankie, in common tongue, a combined search of the navy and air force located and retrieved the final bomb in April.

Paco, with good Spanish ingenuity, under maritime law, as the one that identified the location of the salvage, claimed salvage rights of the recovered bomb in the first district federal court of New York. As customary in such cases Paco asked for 1 to 2 percent of the value of the bomb, valued in $2 billion. The air force settled for an undisclosed amount out of court, but in later years the conspiracy surrounding Palomares started as Paco denied to receive any compensation (the conspiracy claims that Paco is cheap and don’t want to buy drinks with his 20 million, nah I just made that out , Paco and the claim are real).

With the bombs secured the focus passed on the cleaning of the irradiated area contaminated by deadly plutonium and americium. 700 us airmen participated in the cleanup effort, for this, 3 inches of the topsoil was removed and sealed in over 4800 barrels that latter were sent for storage in a US facility. The operation was hasty and sloppy.

“There was no talk about radiation or plutonium or anything else,” said Frank B. Thompson, a then 22-year-old trombone player who spent days searching contaminated fields without protective equipment or even a change of clothes. “They told us it was safe, and we were dumb enough, I guess, to believe them.”

Mr. Thompson, 72, now has cancer in his liver, a lung and a kidney. He pays $2,200 a month for treatment not covered by the air force because they still claim there was not harmful radiation on the site.
edit on 26-11-2016 by Indigent because: trying to get picture size right, but failed in the end

posted on Nov, 26 2016 @ 08:31 PM
link
As the cleanup process elongated the locals started to panic about the imminent doom, as Spain is strongly dependent on tourism the main concern of the locals was not the possibly painful death by radiation, but the lack of tourist visiting the sunny coast of Spain. To calm the people, then dictator Francisco Franco send then tourism minister Manuel Fraga accompanied by US ambassador Biddle Duke to take a relaxing swim in the Palomares beach.

Local heroes Duke and Fraga getting their superpowers


Asked by a reporter on the scene if Duke detected radioactivity in the water Duke replied with a laugh: "If this is radioactivity, I love it!", and despite being dead since 2012 some Spaniards claim the radiation made Fraga immortal, the strongest conspiracy theory is that the photo op was actually carried out 20 miles south of Palomares in Mojacar.

The other big concern of the incident was the economical impact to the tomato farmers of the area, so good old franco just ordered to sell the crops without any label indicating it came from Palomares.

Site as can be found on present day. The area is safely secured by a fence; ever since the locals have to take an annual examination in Madrid, some of them have not been checked in decades.

While radiation readings are not specially alarming outside the fence just slightly removing the soil inside the fence still yield strong measurements, locals fear that on windy days dust from the site carries radiation. By the other hand reports indicate that most of the participants in the clean-up effort have had cancer.

A permanent solution to clean the area is still being negotiated between US and Spain and in 2012 secretary of state Hillary Clinton stated:

"Secretary Clinton has said this will be resolved before her mandate is up," and. "'I am personally committed,' she said."

Many conspiracies arisen from the incident, from the believable to Aliens.

Firstly, doubts about camp Wilson, the temporal base US made on the side, made locals believe the Americans were not searching for the bombs, but in reality, an UFO crashed on the site and they were recovering the crash, many eyewitnesses of the crash claimed the saw a third object beside the 2 planes that collide midair, a disc shaped UFO that crashed on the sea.

The strong military presence was attributed to the possibility USSR could try to recover the devices for their technology; another allege party interested in recover the tech was the Spanish government, that at the time had a program developing nukes and there are claims they dispatched a general to retrieve the trigger mechanism before Americans could arrive to the scene.

It is claimed that for a time US did not inform there were nukes on the incident and they pretended to carry out the salvage in secret, Spain only found out by a mistake of the ambassador, probably the reason he was send to the irradiated waters.

It is also claimed the plane carried a fifth bomb that never was recovered.

Two of the bombs can be seen in the National Museum of Nuclear Science & History in Albuquerque, New Mexico. 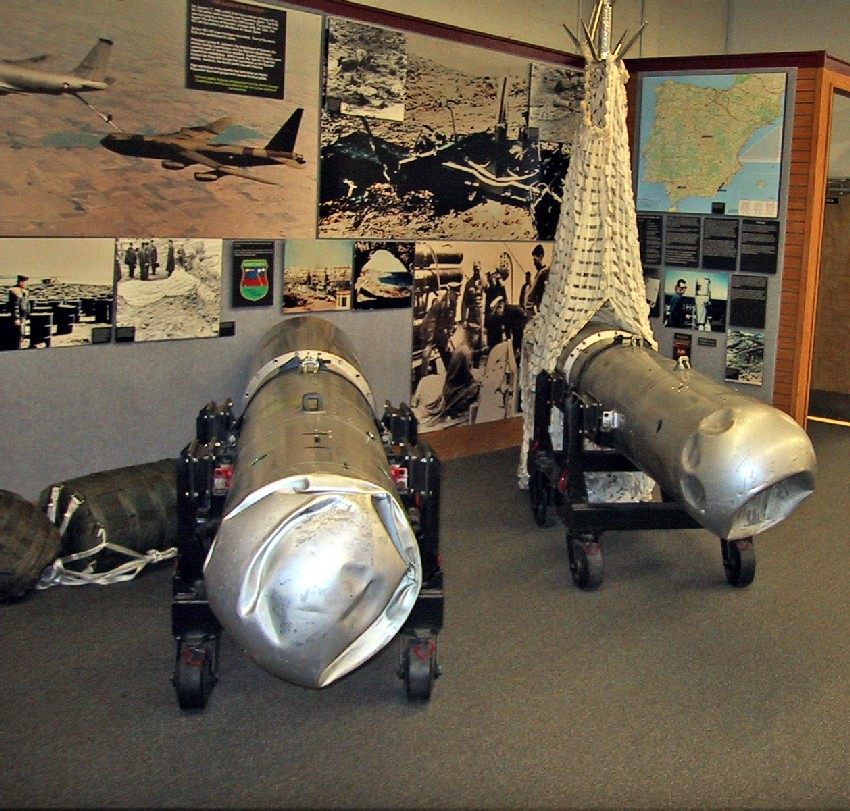 My sources, The BBC article is the most complete and enjoyable to read.
www.bbc.com...
NYT article about the sickness of the clean up personnel
www.nytimes.com...

I remember that from grade school days! "Damn, plane crash...that we can replace....but we should really get those nukes before the press gets here!"

A lot of upheaval about that incident then...I remember thinking "Its that easy for an accident?"