Obama Slams Stein's Recounts: The Results "Accurately Reflect The Will Of The American People"

You can BS the Public half of the time, but you can't BS them All of the Time, and Obama knows what everyone with any sense already knows, delving into this is nothing short of beating a dead horse.

Jill Stein's credibility seems to be sinking fast as both the Obama administration and the Clinton campaign have released statements this morning indicating they've failed to uncover a single shred of election hacking evidence.

The Obama administration confirmed their confidence in the election results via comments made to the New York Times saying that the election was "free and fair from a cybersecurity perspective" and that votes "accurately reflect the will of the American people.


Because we had not uncovered any actionable evidence of hacking or outside attempts to alter the voting technology, we had not planned to exercise this option ourselves, but now that a recount has been initiated in Wisconsin, we intend to participate in order to ensure the process proceeds in a manner that is fair to all sides.

If Jill Stein follows through as she has promised and pursues recounts in Pennsylvania and Michigan, we will take the same approach in those states as well. We do so fully aware that the number of votes separating Donald Trump and Hillary Clinton in the closest of these states—Michigan—well exceeds the largest margin ever overcome in a recount.

edit on Sat Nov 26 2016 by DontTreadOnMe because: trimmed overly long quote IMPORTANT: Using Content From Other Websites on ATS

Haha, he has time to say that but never addressed the protests (riots).

posted on Nov, 26 2016 @ 04:43 PM
link
Yeah . Was reading Obama's replies to the recount earlier.Is this just a ploy or does he mean it. You have to take everything he has said up to this as diametrically opposed to what he means and does...

So, the question becomes how will Jill Stein respond now that the establishment seems to be turning on her and what exactly will happen to the $5.8mm she raised if recount efforts are suspended? Somehow we suspect the disaffected Hillary donors won't simply get their money back.

That's a whole lot of money Jill Stein. I'm sure it won't be used for anything good when all is said and done. What a waste, people need to wake up to this sh|t and stop giving them your $$$ for it.

I think Stein is just doing this for attention at this point. I would've preferred to remember her as the candidate who stood with the pipeline protesters than for this inanity.

Haha, he has time to say that but never addressed the protests (riots).

Probably because he's connected to them, but not this.

posted on Nov, 26 2016 @ 04:46 PM
link
Probably Stein is mad that Trump wont prosecute Clinton, so she is forcing a recount to show Clinton rob her some votes and should go to jail, soon even Clinton will say that recounts are deplorable.

posted on Nov, 26 2016 @ 04:47 PM
link
Thing is, evidence actually has to be presented to initiate a recount in PA. That seems unlikely to happen.

originally posted by: MysticPearl
Thing is, evidence actually has to be presented to initiate a recount in PA. That seems unlikely to happen.

She is screwing the hardline clintonions. Trump is going to remain president elect until sworn in in January. If clinton thought she could screw Trump with a recount, she would have tried it herself.

Jill is cashing out on the deluded new-lib dime 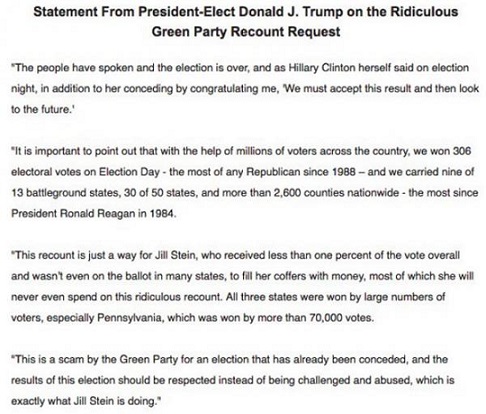 There has to be a Clear Justification for Requesting a Recount of Votes in Certain States by the Stein Campaign . So Far , NO Evidence of one have been Presented .

“In all three states there were precincts where over 95 percent of the vote went to Clinton with voter turnouts above 90 percent,” wrote “Navy Jack,” an anonymous Navy veteran leading the Operation Sabot 2016 effort on the Oath Keeper’s website.

“Richmond, Denver and Clark County had precincts with more votes than registered voters,” Navy Jack continued. “This is similar to what occurred in Philadelphia back in 2012. In Virginia, Governor McAuliffe issued 60,000 autopen pardons to allow felons to vote.”

Navy Jack noted that Governor McAuliffe mailed each newly-pardoned felon a personal letter asking them to vote for Hillary Clinton, along with a voter-registration form, ballot and a postage-paid envelope.

“In each of these cases, the President Elect appears to have been disadvantaged,” Navy Jack concluded. “If recounts and investigations become inevitable, expanding the list of states to also include states won by former Secretary Clinton would be appropriate.”

That's a bad communicate, if he is secure of his numbers he should say that a recount is welcome as it will prove the integrity of the electoral system or something like that, but at the same time he said over and over that the system is rigged so...
edit on 26-11-2016 by Indigent because: better word

originally posted by: MysticPearl
Thing is, evidence actually has to be presented to initiate a recount in PA. That seems unlikely to happen.


I wonder if her new mansion on the beach will be next to Bernie's.

originally posted by: Zanti Misfit
a reply to: JesusXst

There has to be a Clear Justification for Requesting a Recount of Votes in Certain States by the Stein Campaign . So Far , NO Evidence of one have been Presented .

The greed of people like this is unbelievable. That she's getting away with it, she's raised over 5 Million Dollars? So, either George Soros is funding her to do this and rhyle up the people, or he actually [if in fact he's involved] my gut says he is, just to piss off The Voters and in particular, Trump himself.

The whole thing is a twisted mess.

I didn't know Bernie had a mansion.

Is that the 600,000 dollar house that any career senator could get a mortgage for especially close to retirement? They get a nice little retirement package.

Oh come on, we all know he paid in cash stained with the blood of the pizzas...

posted on Nov, 26 2016 @ 05:04 PM
link
Does Obama see her as vying for control of the democratic party when he is laying his own claim to it? Or is he just being straight. Cant tell with Obama. I dont like a lot of his policies, and he can lie with the best of them but i dont think he wants to destroy america, and sometimes hes candid.

I Predict P.A. and Mich. Will REFUSE to have a Recount Due to a Lack Of Evidence to Justify it . The Reason for Wisc. going ahead with one has Still Not been Explained in Detail by the Wisc. Elections Commission .

There's no way that Hillary would initiate a recount and Obama support it after all the Trump bashing they did when he mentioned that he may contest the election result. Stein is being used as tool to draw attention away from them, as both Hillary and Obama would lose major support and credibility after stating that a contested election would undermine American democracy. Stein is a "henchwoman," and with her leading the charge, it allows both losers to remove themselves from the equation.