Castro. The last of the greats is Dead. Entering an Era of Mediocrity

posted on Nov, 26 2016 @ 12:27 PM
link
The greatest feat of the NWO agenda is the moral, spiritual and mental emasculation of the population where the only thing left are people like Donald Trump, Hillary Clinton, Barack Obama, and George Bush to lead us.

Indeed the death of the Great Fidel Castro is the--at least symbolic and maybe literal--death of all the great leaders in the world. Mandela was the next to last great one to die. I mentioned in an old OP previously that Fidel Castro was the last of a heritage of great leaders from the last generation. Which numbers such people of stature as John Kennedy, Bobby Kennedy, Martin Luther King, Malcolm X…And even an earlier period from WWII, with such luminaries as Franklyn Delano Roosevelt, Winston Churchill, Stalin, Lenin, even Hitler for this analysis is not completely a moral one but one that measures stature where such people will crown history with their greatness based on that stature not necessarily on a moral basis.

Indeed, where are and world leaders today who will make their mark on civilization one-way or the other, negative or positive?

There aren’t any and that is my point, the global hierarchy has deliberately emasculated the population of the world with people of at best modest stature so they themselves can arrogate power and leadership to themselves as the population wallows in a vicious mediocrity that spells doom for the world eventfully.

Castro was a great man; however, he is viewed politically or morally. He withstood great odds in even surviving numerous assassination attempts by the US Empire and ended up thriving in that environment. However flawed Castro was in many eyes, and he was a flawed leader, he single handedly wrested Cuba from decades of oppression and at least served his people by making them free from the starvation and slavery to the capital class in Cuba, There are no and will be no leaders anywhere near his stature coming any time soon because the world is being programmed into ignorance, mediocrity and slavish thinking where independent and powerful people are rare.


All this world culture can produce is a miserable and ignorant religious fanatic like a Bin Laden, mediocre con men like Barack Obama, and Donald Trump, as well dangerous and deceptive leaders like Hilary Clinton and Vladimir Putin, and a depraved mass murderer like a George W. Bush. Indeed, they’ll be no more Martin Luther Kings, only Al Sharpton’s, and Jesse Jacksons, no more leaders like John Kennedys, or Nelson Mandela’s in this world for we are entering a dark age of leaders who have only connections to sinister and nefarious forces behind them that pulls their strings like puppets…

Indeed these are leaders of the Matrix…

I am not sure how he was any better than any other POS.

What are your views on Stalin? Does the world need another "great man" like him as well?

You obviously didn't read the OP where I mentioned many leaders of stature who affected the world.

StallionDuck
+7 more
posted on Nov, 26 2016 @ 12:38 PM
link
Seriously? A great man? Is that why there are people native to Cuba dancing in the streets right now? Is that why people were escaping Cuba on makeshift rafts to float across 100 miles of ocean to get to the US, risking life and limb? Floating on barrels? Knowing they have a REALLY good chance of drowning?

Somehow I think you have your wires crossed. Sure, he stood up against the US, but do you even know what he did to his own people? He originally fought for democracy. He fought against a dictator who just jumped in and took an election from him. He was mad enough to start his own small ragtag army and some years later, take it back in the name of democracy but instead... became the same tyrant dictator who he deposed. Further more... the dictator that he deposed actually tossed Castro in jail and let him go about a year later WITH his men. Those same men eventually came back and murdered ALL of those same people in the streets like madmen.

You might want to go back and read about the man that was responsible for nearly pulling the US and Russia into a nuclear war. He was a psycho dictator who took his peoples rights away and freedom of speech and replaced it with starvation and subjugation. Anyone who disagreed with him HAD to escape from Cuba or be killed or imprisoned.

Really great guy, I tell ya.


No actually Fidel and JFK were negotiating peace when they killed Kennedy.

If you want I'll provide historical sources for you

posted on Nov, 26 2016 @ 12:41 PM
link
Is interesting that the US made Castro a monster, that took over the democracy that once use to be Cuba, yeah, the good old days when the Mafia used to run the country, hotels, clubs and all the luxuries that only US run mafia could offer.

Casinos, bars you name it, it was money to be made and the people in Cuba still were slaves.

Castro kick them all of the Island, for that he was call evil doer, dictators and abuser.

But when the mafia use to do the abusing they were the good people.

Now, is money to be made in Cuba, take their beaches for private hotels, is jobs to be created, while the big corporations will profit from slave labor, Wal-Mart is needed, McDonald, Burger kind, you name it, they all in line to pollute Cuba with their trash, Monsanto will help the farmers, they will make sure that they will polluted their still pristine land.

Cuba is ripe for the picking, they also need diversity, we need to bring some immigrants and Muslim refugees, that is the right thing to do, get their crime rate to spike, they need drug companies health insurance and social benefits, they need to be absorbed into the capitalistic system.

I feel sorry for Cuba, once US influences get back into the Island Cuba will never be the same again

He assumed room temperature and the world is better for it.

posted on Nov, 26 2016 @ 12:42 PM
link
There was a time when there were politicians, be they good or bad, who were giants. That era has ended because nearly all come from an actual political class and are selected by parties for their compliance to ideologies. There may be something of the old school in Trump, but if not, at least he was not selected from a sterile pool of unseasoned political clones.
edit on 26-11-2016 by CulturalResilience because: (no reason given)

Great man... no not really.

I understand I do not like reading long ones either. BUT I DONT COMMENT ON SOMTHING I DONT READ OR UNDERSTAND!

That’s makes my point they have us in a state of constant black and white thoughtless bickering where wisdom and greatness is replaced by trite simplicity at best and naked ignorance at worst.

posted on Nov, 26 2016 @ 12:45 PM
link
There is no greatness in seizing power over a country, its people and, retaining that power through fear, intimidation, brutality and oppression.

All dictators fall sooner or later...

The living conditions are not great, The economy only functions due to a large black market that most people accept as a way of life.

Are your other heroes Che, and Hugo Chavez?

If US politicians in 1900 could have seen how big a pain Cuba was going to be they would have annexed it after the war with the spanish not give it protectorate status, regardless of the hypocritical move it would have been.

posted on Nov, 26 2016 @ 12:47 PM
link
Castro was an ardent opponent of the Bilderbergs and the NWO agenda. He even had the bravery to speak of it publicly as a world leader. His rule of Cuba proved that there were alternatives to the NWO and servitude as a client state ruled by the American financial elite.

I'm sure that was no small factor in the CIA trying to murder him 650 times.

There will be people who deny this though because they have convinced themselves that the propaganda put out by the very same people they condemn here on a daily basis is somehow true in Castro's case.

I think you are wrong in your analysis though OP. Globally there seems to have been a shift against the American-European financial elites. Even within the very heart of it. In Europe we have seen Brexit and the meteoric rise of Anti-EU, Anti-Globalist political parties. One could argue it's taking place in America, if Trump lives up to his hype.

I think Gaddafi was the last one they will ever be able to force out of power. Things do not look good for the globalists. Not good at all.

Again, you make my point that the sheep will do as they are told and think as they are commanded

I wonder how many leaders could withstand the numerous assassination attempts the US tried to do.

He survived all the presidents that tried to murder him

I am from Venezuela and somebody tried to brain wash me, but it was not USA 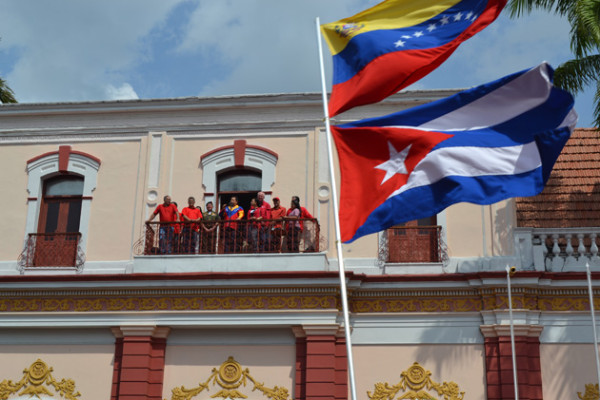 I don't know any Cuban that is not an agent of the g2 that speak well of Castro outside of Cuba.

Speaking of propaganda, Chavez spend millions paying "intellectuals" like Pablo Iglesias to spread his messages in the first world, propaganda, only one side has it according to some..

All those cubans in florida brainwashed too? I would trust them before a michael moore film or my mandatory diversity history class at Uni.

I'm from Puerto Rico, we have many Cubans in our Island, they also tell a side of Castro that no many people knows, they tell that while it was a lot of opponents to the Castrol regime, it was more that loved him as a leader.

Usually is two sides of the story.