of their idiotic Leaders who can't run anything

but their mouths. They need to bring back

The Soul in Seoul. 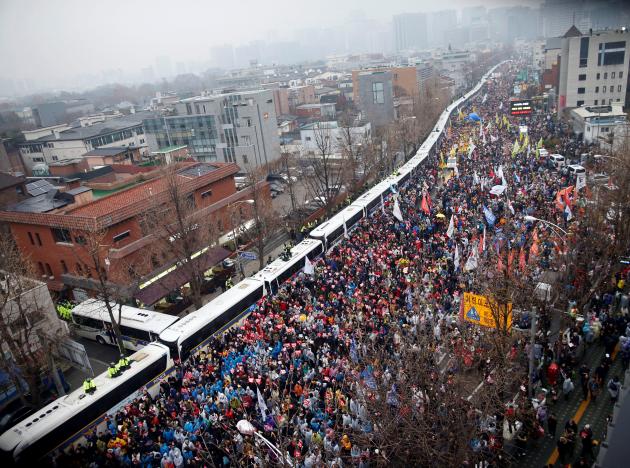 
Hundreds of thousands rallied in central Seoul on Saturday for a fifth week of protests against President Park Geun-hye, in the largest ongoing series of demonstrations in the country since the 1987 movement to democratize South Korea. Park's presidency has been rocked by allegations that a close friend used her ties to the leader to meddle in state affairs and wield improper influence.

Prosecutors investigating the case have indicted her friend, Choi Soon-sil, and are seeking to question the president about her role in the scandal. Organizers said 800,000 people had gathered early on Saturday evening and expected a total of 1.5 million people to join by the end of the night. Police declined to give an estimate of the crowd size but said 25,000 personnel had been dispatched to police the protest.

The protests, now in their fifth week, have remained peaceful and marked by huge candle-lit rallies where activists and rock bands have entertained a diverse crowd of students, office workers, and young families. "I was watching the news and thought this cannot go on - people really want her to step down but she hasn't," said 45-year-old Kwak Bo-youn, one of the protesters.

That's not right, the weilding power of Gov'ts to cover up what's going on. It's no wonder they're trying to overreach their own power across a free Internet, the people know what's going on.

Like a chain reaction on a subatomic level of all humans subconcious etheric knowing it will be the straw that broke the camels back. You can't stop a flood.

It makes me sick to hear about another corrupted goverment, another affair with high ranked officials.
But they are people, and people let them do their job. If only more could be aware of this BS.

I hear you, i feel the same way. Too much corruption, too much crap all over the place from every corner it seems.

originally posted by: mikegrouchy
"You got to change your evil ways"
+ video of massive protests
= youtube multiplier


If she doesn't resign, the people may have to consider alternative means of eradication.