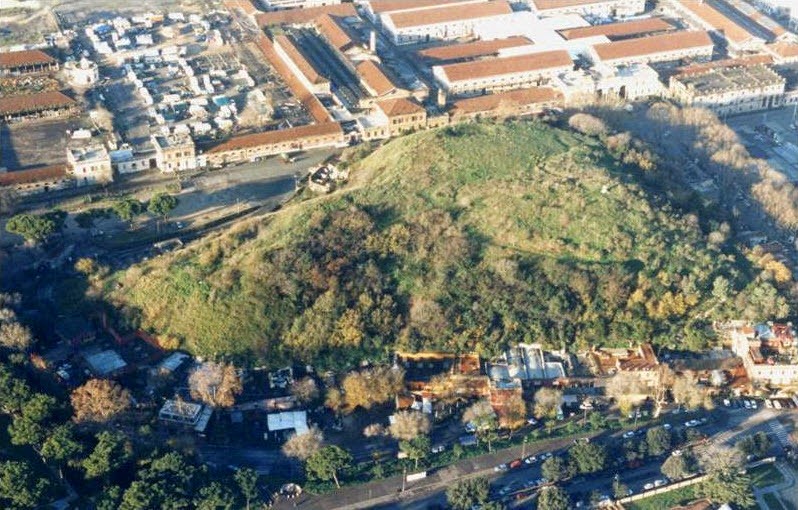 There's an old adage — one man's trash is another man's treasure. In this instance, a whole mountain of ancient trash is everyone's treasure.

Though the word amphora is of Bronze Age Greco-Roman origin, amphorae usage dates back at least to Neolithic Egypt. The curvy, handled jugs, typically made of ceramic, were a standard container for shipping olive oil, wine and other liquids as well as some dry goods. Testaccio is the 20th rione (administrative district) of Rome, it takes it name from Monte Testaccio. From about the third century BC to the second century AD, Testaccio was Rome's busy port on the Tiber which meant a constant flow of cargo ships bearing amphorae.

The prevailing hypothesis is that particular amphorae, used for transporting olive oil from what is now Spain, were unsuitable for re-use and so as the amphorae were emptied into larger containers, they would often be thrown directly into the Tiber. Over time, the volume of discarded clay vessels began to clog the waterway. To resolve this problem, a new practice was developed. The amphorae were broken and the sherds stacked nearby. This stack eventually grew over the course of 1.5-3 centuries to a pile of tens of millions (estimates I've read range from 25-53 million) of broken amphorae, reaching a height of 45 m (148 ft), with a circumference greater than 1 km. It's noted that the hill was probably much larger in ancient times. This artificial hill came to be known as Monte Testaccio (from the Latin testa and Italian cocci — both words referring to sherds). 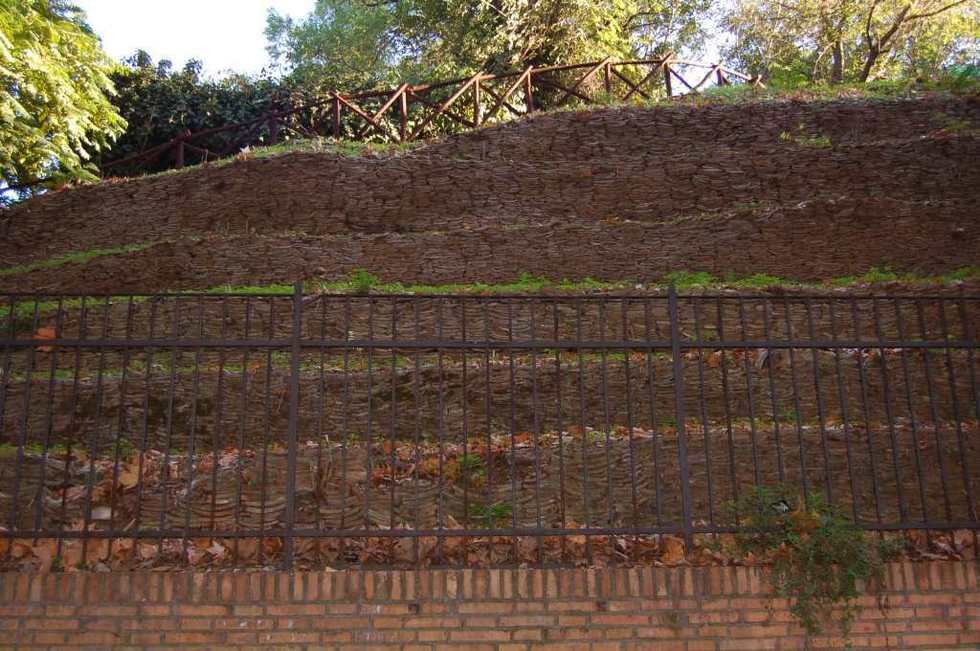 In recent years, the area around Monte Testaccio is noted for its nightlife but over the centuries, it's had significance for a variety of reasons. Because it's Thanksgiving and I'm about to head out (and I'm feeling lazy), I'll excerpt heavily from Wikipedia:

Monte Testaccio's use as an amphora dump seems to have ceased after about the 260s, perhaps due to the city's quays being moved elsewhere. A new type of amphora was also introduced around this time to transport olive oil.[9]

The area around the hill was largely abandoned after the fall of Rome. A print of 1625 depicts Monte Testaccio standing in isolation in an area of wasteland within the ancient city walls,[4] and even as late as the mid-19th century the surrounding area was little more than a "romantic desert" on which was situated only "a few shabby houses".[10] It was the scene of jousts and tournaments during the Middle Ages, when Monte Testaccio was the scene of pre-Lenten celebrations. As part of the festivities, two carts filled with pigs were hauled to the top of the hill, then allowed to run back down the steep slope to be smashed to pieces along with their porcine passengers. The watching revellers would then dismember the pigs on the spot and carry the parts off to be roasted and eaten.[11]

Monte Testaccio was still used as a place of recreation when Stendhal visited in 1827.[12] A 19th century traveller, visiting a few years earlier, described the annual festival that was held on the summit of the hill:

"Each Sunday and Thursday during the month of October, almost the whole population of Rome, rich and poor, throng to this spot, where innumerable tables are covered with refreshments, and the wine is drawn cool from the vaults. It is impossible to conceive a more animating scene than the summit of the hill presents. Gay groups dancing the saltarella, intermingled with the jovial circles which surround the tables; the immense crowd of walkers who, leaving their carriages below, stroll about to enjoy the festive scene ..."[13]

The hill gained a brief military significance in 1849 when it was used as the site of an Italian gun battery, under the command of Giuseppe Garibaldi, in the successful defence of Rome against an attacking French army.[10] Its economic significance was somewhat greater, as the hill's interior was discovered to have unusual cooling properties which investigators attributed to the ventilation produced by its porous structure. This made it ideal for wine storage and caves were excavated to keep wine cool in the heat of the Roman summer.

Monte Testaccio also had a religious significance; it was formerly used on Good Friday to represent the hill of Golgotha in Jerusalem, when the Pope would lead a procession to the summit and placed crosses to represent those of Jesus and the two thieves crucified alongside him. Monte Testaccio is still crowned with a cross in commemoration of the event. It was not until after World War II that the area around the hill was redeveloped as a working class neighbourhood.[14]

The first archaeological investigation of Monte Testaccio began in January 1872 under the German archaeologist Heinrich Dressel, who published his results in a pioneering study in 1878.[15] Further important work was carried out in the 1980s by the Spanish archaeologists Emilio Rodríguez Almeida and José Remesal Almeida.[16] 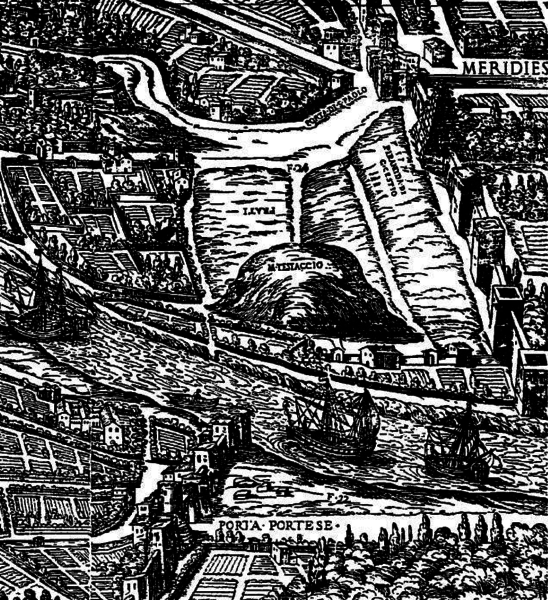 I visited the nightclub scene a couple of times when I was there.. also confronted some interesting situations ..