CFZ (the "Centre for Fortean Zoology") and its director, Jonathan Downes, are well known to anyone with any interest in Cryptozoology.

I recently asked Jonathan for permission to upload searchable scans of the CFZ's magazine - "Animals & Men" - to the AFU's website. (The AFU's collection extends beyond UFOs to wider forteana).

Jonathan promptly responded that he thought this was "a great idea".

So, Issues 1 to 45 of that magazine have now been scanned by our friends at the AFU in Sweden and are now online.

(I mentioned this as part of a much longer post in the UFO forum a few days ago, but I thought that I should mention it briefly in this cryptozoology forum...).

Each of these issues is at THIS LINK

The collection can also currently be downloaded with a single-click from this temporary link :
we.tl... 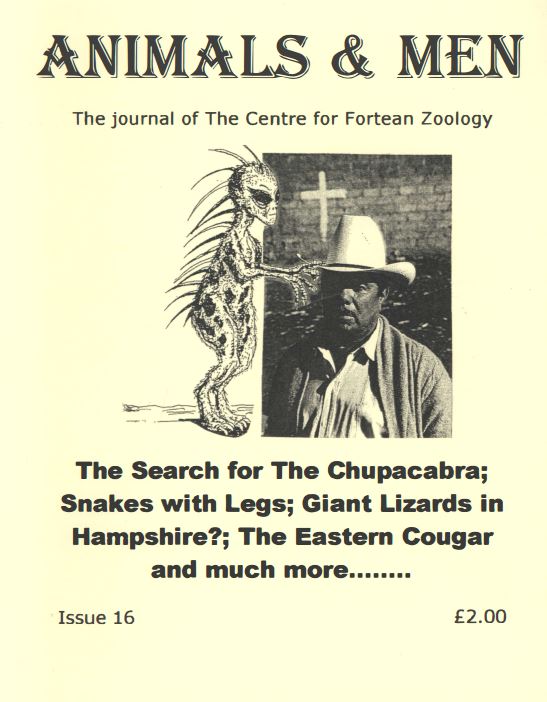 I absolutely love cfz and johnathan. Even enjoy his goofy and fun songs he throws in. Been following cfzs travels to india, africa and sumatra.

posted on Dec, 15 2016 @ 11:05 AM
link
As always you are a treasure to the community! Thanks for sharing this. What a brilliant idea! I definitely have some reading material to go over for a while.

posted on Mar, 24 2017 @ 07:57 PM
link
Anyone got any goodlinksto more recent ibterviews with jonathan downes


Wow that guy looks like bigfoot, lol! Ill take a look around, it has been a while since your post.
edit on 14-5-2018 by smashdem because: (no reason given)


His latest credit on wikipedia is to "Slenderman Killings: Beyond Evil (2016)"
I havent even heard of that. Ill do some youtubing.

They have their own channel, CFZ is still run by John Downes. They did an episode last month.
Heres the channel:
www.youtube.com...


Also, I found the Slenderman Killings.... It is a Sky show, so if you arent in the UK, well, you are screwed. I have been searching for a skyarts program called the Agony and The esctasy, it is a 4 part documentary series on rave culture/electronic music, for over a year now. I have even sent them emails and social media messages asking if there is any way for people outside the UK to sign up for their service, they dont even bother answering.
So I cant watch any of their programs, and they seem to have a lot of good ones too.
edit on 14-5-2018 by smashdem because: (no reason given)
edit on 14-5-2018 by smashdem because: (no reason given)