A gift from a being. 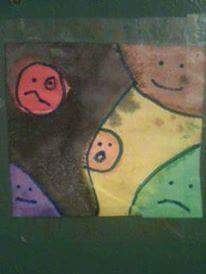 In 2011 I lived in a group home after a series of hospitalizations from hearing terrifying attacks by voices. They chased me around.

Long story short, I heard an "alien" scenario complete with telepathy and UFO sounds. I would pace the front hall listening to repeating non stop madness.

They kept energizing an area by the stairs saying it's red energy that's going to kill me. It made me feel wierd and I got a sore throat. But so did others a day later who also walked through that area.

I ended up in the hospital after a few weeks of constant attacks for a med change. I hadn't discussed these "hallucinations" with anyone at the home.

When I got back a woman, wiccan upstairs said she had something for me of interest. She shows me the image above and said she felt my presence with it. I ask her where she found it. She said she was cleaning her closet and it was in a diary in a lockbox under a bunch of things where she hadn't been in for a long time.

Well, I now am out of the home and doing good. I have two guys I know from the home.

So now you know the premise. I'll explain.
The green face is me because I'm Gemini, green stone represents Gemini and I'm sad. The other two are other people around me at the time.
Notice the red face is sick looking, remember my explanation of the red energy attack on me?
The being of light pushing away the darkness I believe is God or a being of light.

Beyond this I've had claraaudient moments that have witnesses. I won't explain all. But know there is power beyond our comprehension out there. And it is not our concern, I was never into the occult or anything, though I did ouiji and tarot once. Both worked for me. Guess I should've heeded advice not to dabble.
By the way, I believe every digital copy of the image changes the way the original does. I do not have the image but she let me take a picture.
edit on 22-11-2016 by anotherside because: Add

Thank you for sharing your story anotherside.

posted on Dec, 1 2016 @ 07:56 AM
link
Telepathy is a very interesting thing. I've been guided before in front of others by it in amazing ways. These beings can sound good or evil. They range from kind observer guides to malicious sadistic self sacrifice promoters, or instigators of physical pain.

For me I don't hear random words or sounds, but fully intelligent sentences, discussions, opinions, along with my environment being affected physically. It's tough to deal with because it's like the whole spectrum is talking to me. People can tell me I'm sick or need help all they want, i know what I've been hearing, seeing is more paranormal contact than mental illness.