posted on Nov, 22 2016 @ 12:23 AM
link
I was just browsing AP and came across this inspiring story of a woman who will not be silenced, will not fall in line, and will never cease her battle for women's rights in Saudi Arabia. New York times should be publishing her story instead of fishing for chum on our President Elect.

al-Shammary has graduated in Sharia law and uses her knowledge to test the bounds of women's rights as permitted. It is such a shame that the royal family and the clerics have such disdain for the wonderful treasure that is a woman. I mean they want to claim these laws are to protect them, but I would swear they are more out of spite!
Finally, a real feminist. American feminists take note.

A liberal mother of six jailed for challenging Saudi taboos
JIDDAH, Saudi Arabia (AP) — When Souad al-Shammary posted a series of tweets about the thick beards worn by Saudi clerics, she never imagined she would land in jail.
The frank comments are typical of this twice-divorced mother of six and graduate of Islamic law, who is in many ways a walking challenge to taboos in deeply conservative Saudi Arabia. Raised a devout girl in a large tribe where she tended sheep, al-Shammary is now a 42-year-old liberal feminist who roots her arguments in Islam, taking on Saudi Arabia's powerful religious establishment.

She has paid a price for her opinions. She spent three months in prison without charge for "agitating public opinion." She has been barred by the government from traveling abroad. Her co-founder of the online forum Free Saudi Liberals Network, blogger Raif Badawi, is serving a 10-year prison sentence and was publicly lashed 50 times. Her father disowned her in public.

None of it was enough to keep her quiet.

"I have rights that I don't view as against my religion," says al-Shammary. "I want to ask for these rights, and I want those who make decisions to hear me and act."
Across the Arab world, female Islamic scholars and activists have long been pushing for interpretations of Shariah law that allow women more freedom. They hold that Islam considers men and women as equals before God, but centuries of selective interpretation have twisted its spirit.

"Discrimination came from a reading of the religion, not the religion itself," says Olfa Youssef, a professor of Islamic studies in Tunisia and member of the Musawah global movement of Muslim feminists. 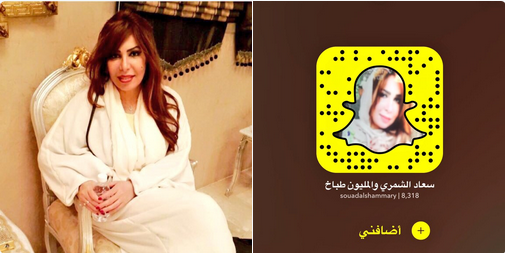 Doing great until you threw in what the Times should or should not be reporting.

Well lets see, maybe they will pick it up yet. Here is hoping she reaches success for women's rights in Saudi Arabia!

Well lets see, maybe they will pick it up yet. Here is hoping she reaches success for women's rights in Saudi Arabia!

I do too. She is inspirational.

The problem with the source material Quran is that you have to make great logical gymnastics to interpret it as equal rights for woman. It will take time for Islam to evolve. I wish It was not so.

It took Maajid Nawaz years before he could say Islam is not a religion of peace.
edit on 22-11-2016 by LittleByLittle because: (no reason given)