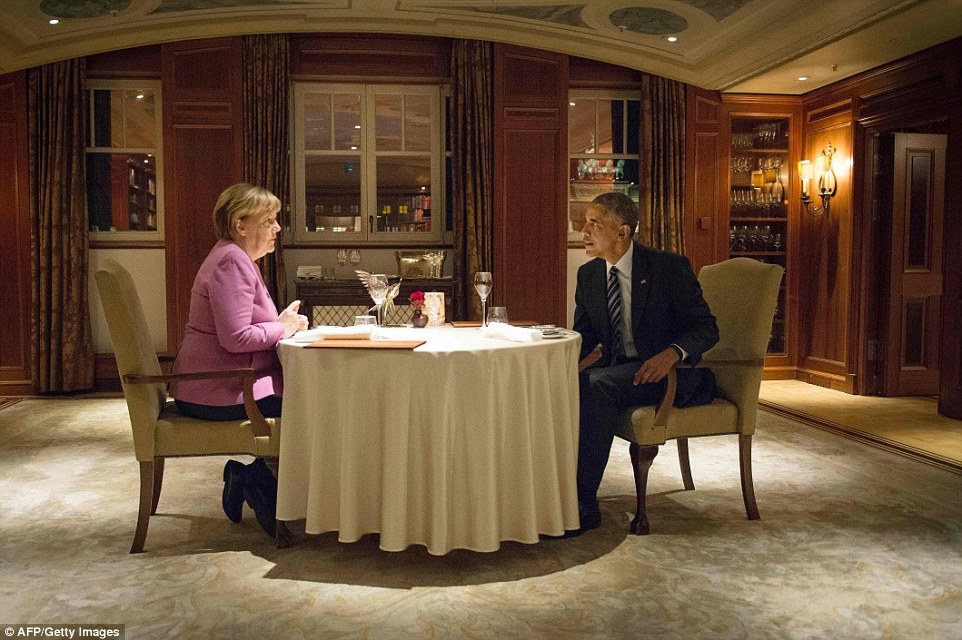 Merkel: We almost took down Western civilization, but the fight isn't over.

Obama: Oh Angy, thought you know that this occupation of germany, since 1945, is for the profits of the USA. And because the USA is the cream of the crop, this occupation will never end. We need the german outpost for our warmongering against russia, as an outpost for all the US alphabet agencies, to spy on the european people, we need germany to store our nukes there.

Merkel: But shouldn´t we tell the german people the truth about all that, because most of them even know?

Obama: But then they ALL would realize that german soldiers don´t fight for the freedom of germany at the Hindukush, for example, and that wouldn`t be good for our western, US billionairs ruled NWO plans.

Merkel: I had to ask you this, because as politicians we are accountable for the satisfaction of our people...

There probably was a very serious reason they had to meet face–to–face. They probably expected Clinton to win like almost everyone else. Clinton winning would have meant a continuation of Obama's immigration policies. You really opened my eyes. I'm sure the conversation between Obama and Merkel was very serious, and it had to happen face–to–face. I'm sure they've learned their lesson about emails. 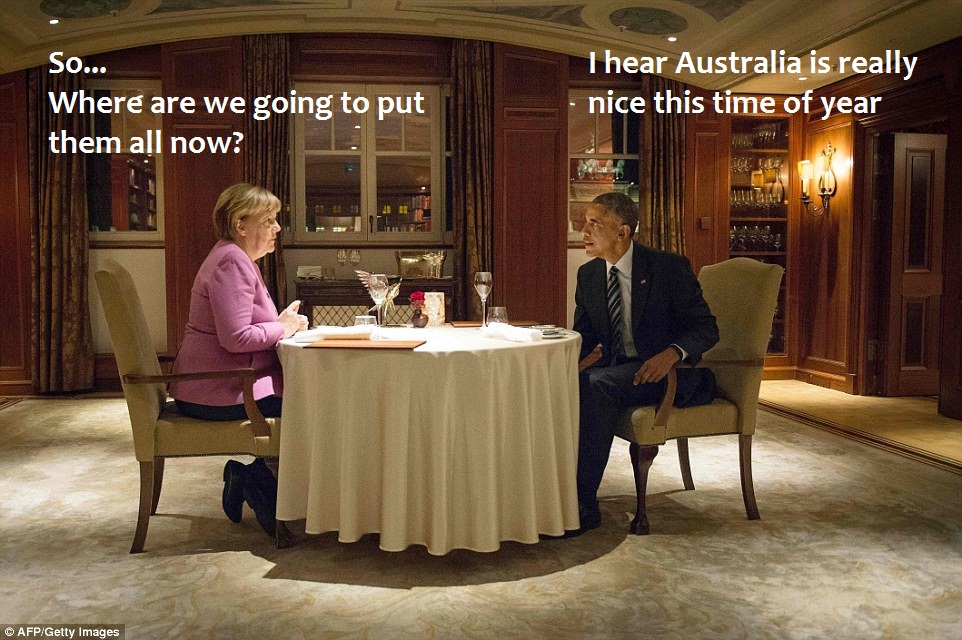 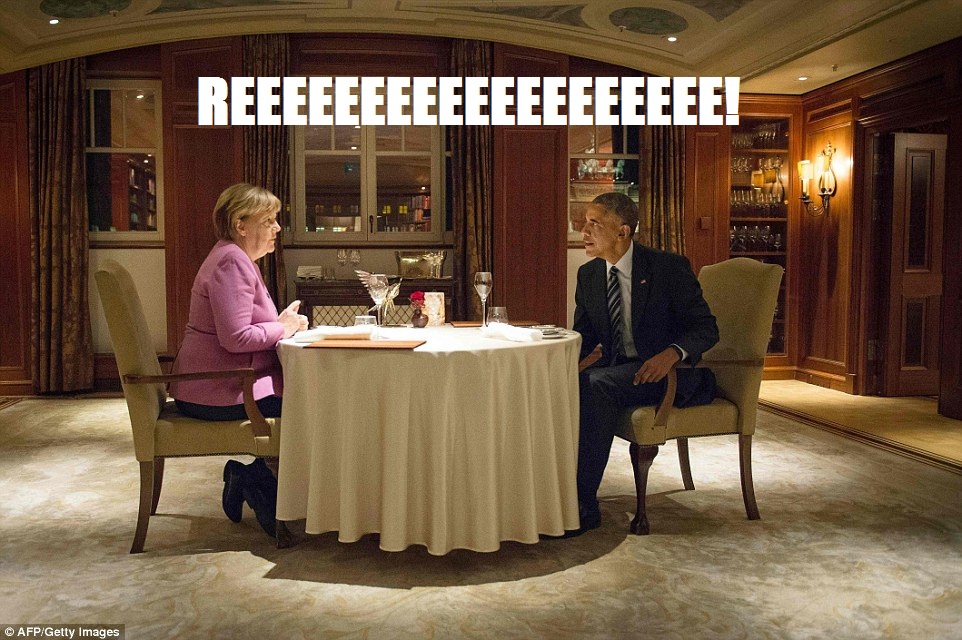 So , Bama my man, know any good places to fish before you enact martial law?
edit on 11-19-2016 by searcherfortruth because: (no reason given)

Merkel: "You know it is true what they say... you really are a panzy."

MERKEL:What about CNN,MSNBC,CBS,FOX,REUTERS,The New York Times and The Washington Post?

Obama: No - it looks like a bug to me. (thinks: probably one of ours).

well made me waste my coffee.

Merkal: What are we going to do??

Obama: See this big red button under the table?
edit on 19-11-2016 by iTruthSeeker because: (no reason given)

Merkel : why are you touching me with your foot under the table?
Obama : That's not my foot.
Merkel.: That's not my leg neither.
edit on 19-11-2016 by Trueman because: (no reason given) 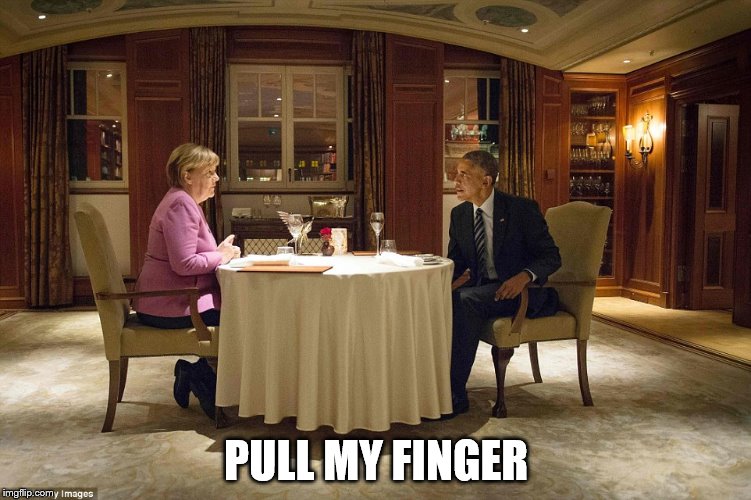 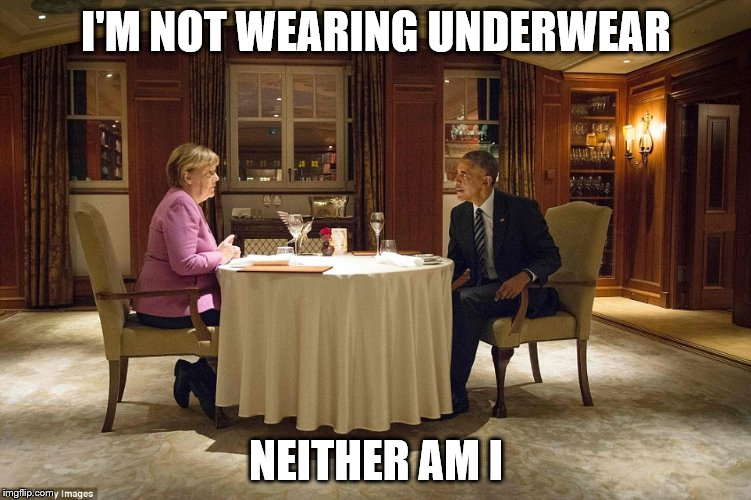 Merkel: Is that your foot?